New motherhood can be euphoric. But it’s also messy and grueling, and it’s that side of the equation that Erin Buckley spotlights in her new play, A Rebirth into Motherhood, which will have a reading at the Howland Cultural Center at 3 p.m. on Sunday, March 24, followed by a discussion.

Buckley met the mothers who provided material for the play at a series of workshops she organized in Beacon after receiving a grant from Arts Mid-Hudson. The discussions, which covered topics such as fertility, feelings of guilt and loss, sex, anxiety, loneliness, post-partum depression, recovery after birth, and relationship skills, were designed, she says, as a “safe place for new mothers to share conversations about the things that women don’t often talk about.”

At the workshops, which began in August at the Beacon Recreation Center, Buckley invited participants to take part in the reading of the play. Some were hesitant to perform, she says, but felt more comfortable when told the stories would be altered to disguise the identity of the mothers who shared them. The script presents their stories in the context of a baby shower. (A few women in the reading did not take part in the workshops.) 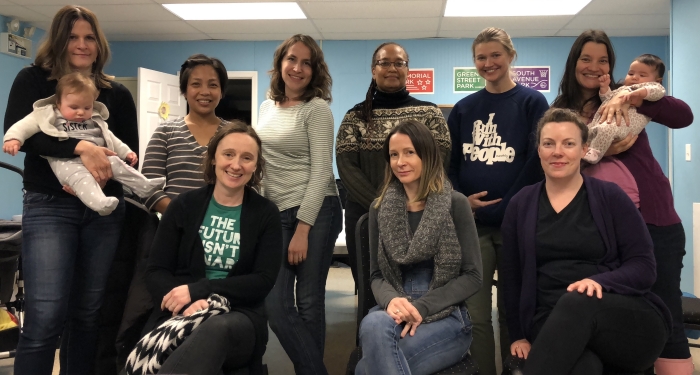 The Rebirth journey began soon after the birth of Buckley’s 3-year-old daughter. Late-night commiserations by text messages with another new mom soon turned into “seriously intense stuff,” Buckley says, “At one point I said: ‘This is TMI [too much information].’ She replied: ‘We’re moms now, nothing is TMI.’ ”

Buckley grew up in Wilmington, Delaware, and earned a bachelor of fine arts degree from Syracuse University, where she studied musical theater. She worked as a teaching artist at public schools and has organized a number of community projects, including interviews with immigrants in New York City and working with young people in Namibia to create a film. She and her husband lived in Los Angeles but decided to return to the East Coast to be closer to family.

Sheila Griffin, who lives in Beacon, didn’t plan on performing. She had attended a workshop two months after giving birth and enduring a post-partum hemorrhage that led to a hysterectomy. At first, the idea of a play gave her pause. “While I appreciate theater, I’m not a performer,” she says. “The anonymous aspect of it appealed to me, but now I want to read the part closest to me, which I never would have envisioned. It’s important that the ideas are going to be put out in the public; it’s important for other women. It needs to be more OK to talk about these things.”

Tickets are $5 in advance at rebirth.brownpapertickets.com or $10 at the door. The Howland Cultural Center is located at 477 Main St. The reading is suitable for mature audiences.