There are a bunch of gamers over at the Howland Public Library in Beacon who aren’t manipulating their thumbs. They aren’t even competing. Instead, they are seniors keeping their minds active with “brain games” — and conversation — at a Thursday morning (10 a.m.) drop-in run. 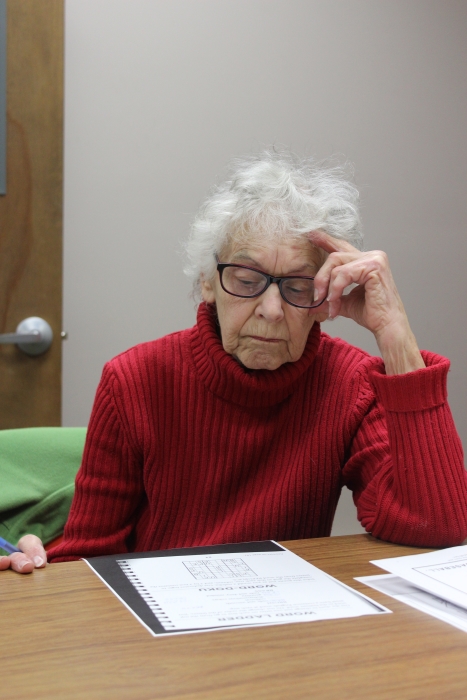 Willa Skinner gives the “word ladder” some scrutiny. (Photo by A. Rooney)

Organized by librarian Alison Herrero, the sessions are sponsored by the Dutchess County Office for the Aging and draw a mix of retirees. Willa Skinner was the Fishkill town historian from 1964 to 2017 and is also a former journalist. “I had the best of both worlds,” she said of her childhood. “I went to school in the Bronx but came up to Dutchess County, where my grandparents had a summer place. It was nothing but dairy farms.”

Then there’s Bill Abramson, who introduced himself as “just plain Bill,” but when pressed, owned up to a surname. A retired tax attorney and accountant, he hails from East New York, Brooklyn, but “ultimately decided to come up north.”

“My cardiologist said I had to do something,” he said. “He told me I had to take my dog on a daily walk, between one and three miles. Walking is so important. I worked for 10 years without taking a day off. I was living on 59th between First and Second. I came up to Woodstock and knew I had to get busy. I saw clients who retired and vegetated. I started to do things: I joined a board, I helped maintain a trail.

“I didn’t earn a dime from any of these things, but I was busy, and busy is good. Being someone from the city, all I knew about wildlife was sparrows and pigeons. But I got a birdfeeder and the birds started coming to me and I started learning more about them. Right now, I have a border collie. They originally came from Scotland and were used for herding. Within three months of her living with me, she saw a bear, and then a deer, which frustrated her because she couldn’t herd it! I live in Beacon because it’s much easier for friends and family from the city to take trains up and visit me. By the way, I’m 89.”

Last to offer an introduction was Ralph Cassitto, or, more precisely, Ralph F. Cassitto, “so I don’t get confused with my son,” he said. A retired architect, Cassitto said he worked mostly on industrial projects. He was born and raised in New York City, but came to Beacon from Virginia. 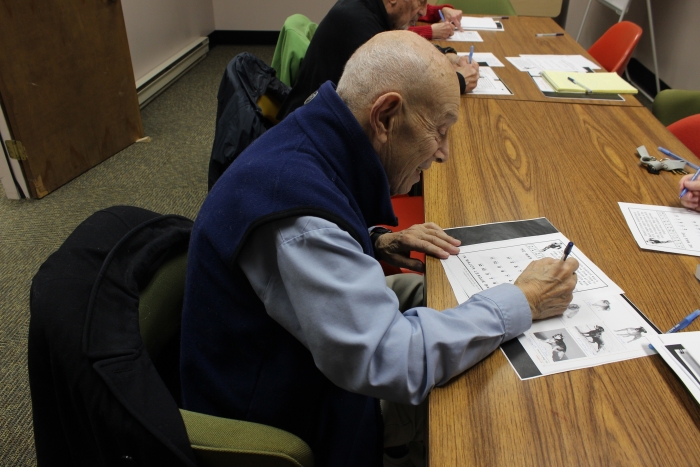 Ralph Cassitto works on a decoding game. (Photo by A. Rooney)

The group began by navigating a pencil maze (“This one is a little harder than usual,” Herrero admitted.) That was followed by a number-and-letter puzzle that revealed that Emmett Littleton Ashford was the first African-American umpire in Major League Baseball, working from 1966 to 1970.

Next came a “name-that-breed” sheet, with photos of dogs. There was discussion about the copies. “If it had been in color, I would have known that was a Rottweiler,” said Cassitto.

Things got shakier on the “word ladder,” which involved altering one letter of a word and using brief definitions given as clues to advance rung-by-rung, e.g., from brush to brash to crash to clash to class to brass. Everyone was a bit stumped at one rung, but Skinner advised: “I started working from the bottom up.”

“Did that work?” asked Herrero.

Cassitto was deep in concentration. “The last two — oh my goodness!” he said, before being interrupted by Skinner’s “Something just came to me!” 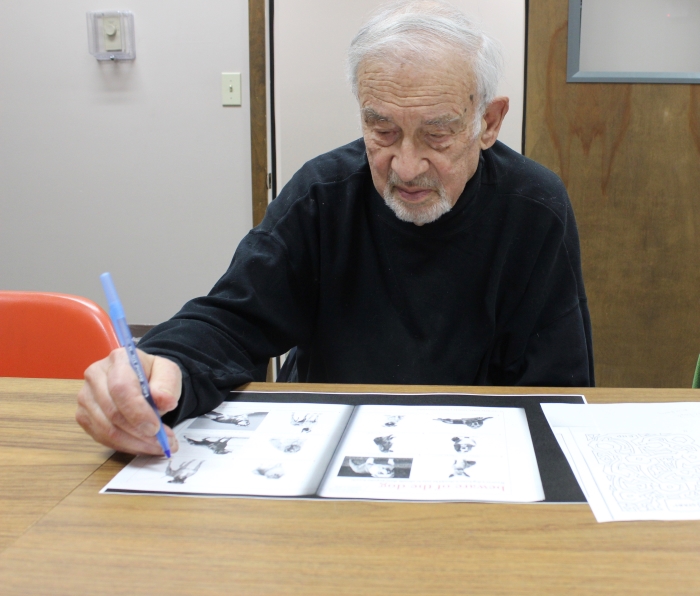 Bill Abramson tests his dog-breed knowledge. (Photo by A. Rooney)

The longest exercise came at the end, with two cartoons with eight subtle differences. Herrero ominously announced: “This is from the hard book. It looks friendly, but I don’t know how friendly it really is.” That proved to be the case, with no one, including this reporter, spotting them all.

As the hour drew to a close, the participants explained why they came. “I open up my brain,” Cassitto said. “We help each other. It’s stimulation. Plus, we meet lovely people.

“In retirement, we want to keep our brains active,” Skinner added.

“It should expand,” agreed Cassitto.