Small islands often have an intriguing, almost mystical aura. That is certainly true of Bannerman’s Island, the 6.5-acre isle in the Hudson River midway between Cold Spring and Beacon.

The origin of its formal name, Pollepel Island, fuels local lore. By one account, after a young woman named Polly Pell was rescued from the river ice, she and her rescuer (whom she later married) landed on the island’s shore.

While it is not known if he ever slept there, George Washington considered using the island as a military prison during the American Revolution.

But it is the story of the Bannerman family, who occupied the island more than a century ago, that has led countless boaters and Metro-North commuters to wonder, “What is the story behind that castle?”

As a child, Frank Bannerman emigrated from Scotland to Brooklyn in 1854 with his family. When his father joined the Union Army, the teenager took over his business, reselling items purchased at Navy auctions. When the Civil War ended, the federal government sold off tons of military equipment, often as scrap.

Frank Bannerman saw the discarded weapons as a potential revenue stream and became proprietor of what might be considered the first Army-Navy store. At the company’s peak, there was no larger supplier of military surplus in the world. 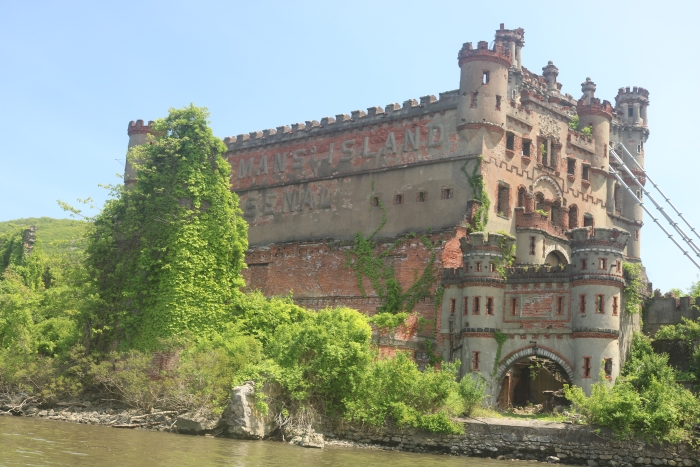 Bannerman’s extensive inventory, outlined in a sales catalog continually updated between 1880 and the 1960s, included everything from cannons, pistols, and African arrows to Gatling guns, swords and medals. (During the Russo-Japanese war of 1904-05, Bannerman made a sale that included 20 million cartridges and hundreds of thousands of items, from rifles and knapsacks to uniforms and saddles.)

The business expanded to the Hudson River after the Spanish-American War ended in 1898. Bannerman purchased the majority of its war materials, including a supply of highly volatile black powder. He needed a safe storage facility away from New York City so, in 1900, he purchased Pollepel Island.

The island’s buildings, which functioned mainly as warehouses, were designed by Bannerman. Undoubtedly a homage to his native country, they resembled a Scottish castle, complete with his family coat of arms, turrets, a moat, docks and a small protected harbor for cargo boats. He also built a home there.

An explosion rocked the powder house in 1920, damaging the structure and causing minor injuries. A lightning strike, quite common on the island, may have been the cause, although the buildings were outfitted with lightning rods.

Frank Bannerman died in 1918 but the business continued into the 1970s, although in later years it was conducted principally out of a warehouse on Long Island.

Longtime residents of the Highlands still tell decades-old tales of pilfering raids to the island in search of cannon balls and other memorabilia.

New York State bought the island from the Bannerman family in 1967; it is under the jurisdiction of the Office of Parks, Recreation and Historic Preservation. In 1969 a fire destroyed most of the buildings. 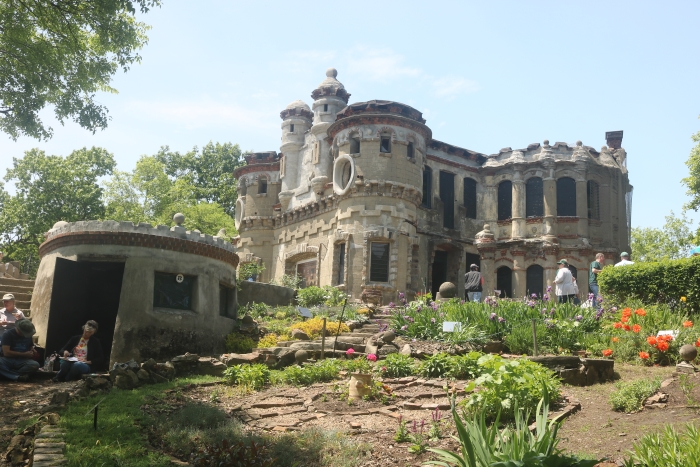 A home on the island now contains a gift shop and visitor’s center. (Photo by M. Turton)

When it was acquired by the state, some of the military artifacts left behind were given to the Smithsonian Institution. Since 1993, the Bannerman Castle Trust has been working to make the island more accessible, and walking tours have been offered since 2004.

Visitors are brought to the island on boats from the Beacon and Newburgh docks from May through October. Special events include holiday cruises, dinners on the island and guest speakers. An evening movie program is back for the third straight year and this summer will include screenings of Psycho, The Wizard of Oz, Jurassic Park, House of Wax and Abbott & Costello Meet Frankenstein.

Neal Caplan helped establish the trust and serves as its executive director. “We had 10,000 visitors last year and hope to improve on that number this year,” he said. “And there are finally real restrooms!”

A comfort station designed and built by engineering students at the U.S. Military Academy at West Point opened on May 22. “The cadets affectionately named it the ‘Bannerman Relief Project,’ ” Caplan said, adding that the West Pointers worked in cooperation with members of Local Union 373 Plumbers & Steamfitters and Local 363 Electrical Workers.

The island provides a dramatic venue for stage productions, which this year will include a Hudson Valley Shakespeare Festival production of Julius Caesar on July 13 and 14, Arsenic and Old Lace in late July and Dracula on Sept. 28 and 29. Caplan said Dracula was so popular last year a second show was added.

Before the opening curtain for Arsenic and Old Lace, Sara Karloff will speak about her legendary father, Boris Karloff, and his role in the 1944 film version of the dark comedy. 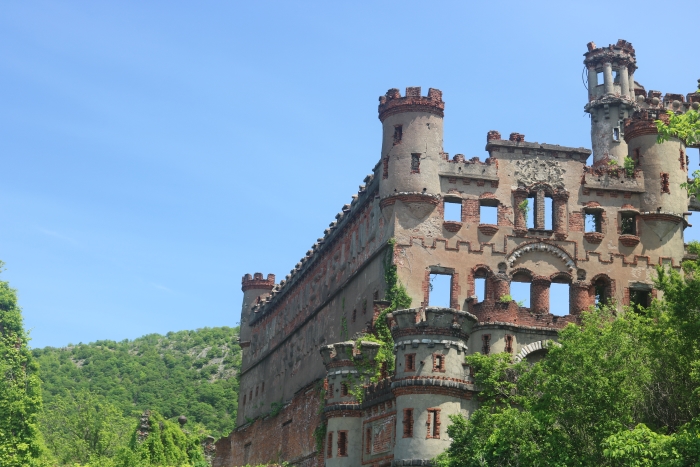 Bannerman designed his warehouses to resemble a castle. (Photo by M. Turton)

Improvements continue on the island. “The house is now in good condition, the best it’s been in years” Caplan said. “The first floor, including a visitor’s center and gift shop, is complete.”

Caplan hopes the next project will be the restoration of the interior walls of the home’s dining room. “That would give visitors a much better idea of what the house was like when the Bannermans were here,” he said.

Volunteers play a big role in the island’s operations and Caplan said there are never too many. “Sixty people contributed to building the comfort station,” he said. “We can always use more volunteers to help with tours, gardening and special projects. And, of course, we can always use financial contributions.”