The Village of Cold Spring is the latest municipality grappling with the long-term effects of short-term rentals such as those booked through Airbnb, including where or if they should be allowed.

Village code prohibits “tourist homes” anywhere but on state roads such as Route 9D or Route 301. At its Sept. 3 meeting, the board discussed a complaint submitted that day by Stephen and Katherine Bogardus, who live on Parrott Street, that a neighbor was “running a hotel” in violation of the zoning laws.

The couple provided the board with a print-out of the Airbnb listing. Although the home no longer appears on the site, at least 25 other rooms or homes in the village are available for $79 to $685 per night.

Mayor Dave Merandy said he would direct Code Enforcement Officer Gregg Wunner to issue a “notice to stop” to the homeowners, Bernard and Tracy Bunye. The board later scheduled a public meeting for Tuesday, Sept. 17, at the Cold Spring Firehouse, beginning at 7:30 p.m., to discuss the regulation of short-term rentals.

Contacted by The Current, Tracy Bunye said she and her husband had rented out their home for the first time, on Labor Day weekend, to acquaintances who were in town for a wedding. She said they advertised through Airbnb because it offers protections to homeowners and removed the ad when they returned. Although the couple received other booking requests in the meantime, they did not rent it again, she said. 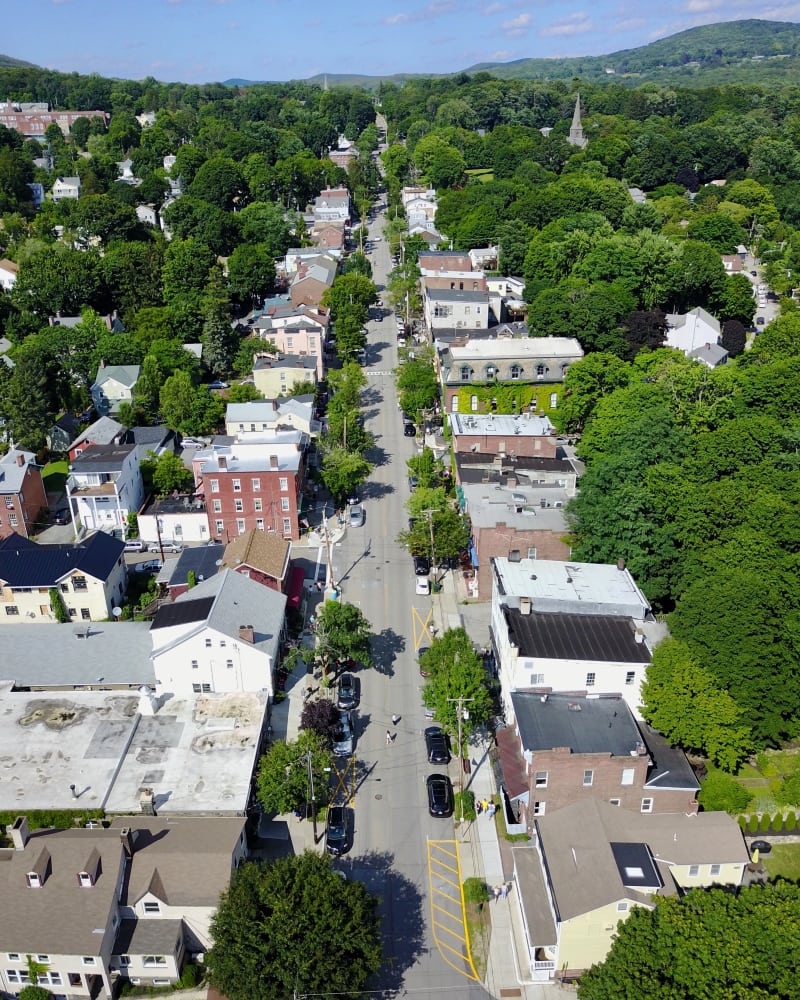 Short-term rentals would be allowed on Main Street in Cold Spring. (Photo by Jerome Strauss)

She said they had not been contacted by the code enforcement officer or their neighbors. The complaint to the board was dated Sept. 3, the day after Labor Day.

Bunye said she understands the reservations people have about short-term rentals. “I’m glad the village is updating the code,” she said, adding that anyone who offers their home through Airbnb needs to be sensitive to their neighbors’ concerns.

Last year, the Beacon City Council grappled with the same issue before voting 4-3 to reject a proposed law to regulate short-term rentals. Because the city bans any use not expressly permitted in the law, the vote effectively outlawed short-term rentals. If adopted, the law would have required homeowners to comply with state building codes for hotels, such as having adequate fire exits.

Bills introduced last year in the state Senate and Assembly that died in committee would have created what Airbnb calls “common-sense regulations,” including requiring owners to post a diagram showing all exits and a list of emergency phone numbers; have insurance of at least $250,000; have only one short-term unit unless the owners live at the same address; and register the unit every two years with the state.

At the Cold Spring Village Board meeting on Sept. 3, Merandy conceded the local code against tourist homes hasn’t been enforced. He said that while few residents have complained, others no doubt have similar concerns and a discussion is underway among members of the Code Update Committee, which has scheduled a public hearing for Oct. 2 to hear continuing feedback on a proposed 500-page revision.

Deputy Mayor Marie Early, who is the board liaison to the committee, said a village survey conducted for the 2012 Comprehensive Plan indicated many residents support allowing short-term rentals due to the lack of hotels. She outlined the committee’s proposed recommendations for “overnight accommodations,” which would replace tourist homes in the code:

An annual permit from the village, a fire inspection and proof of insurance would be required.

The proposed update would permit short-term rentals in areas zoned single-family residential (R-1), multiple-family residential areas at Springbrook and Forge Gate (R-3) and on Main Street and the area west of the railroad tracks (B-1). They would be prohibited at Chestnut Ridge and the Butterfield development.

“The problem seems to be places that advertise that you can have 10 or 12 people,” he said. “Young people, three or four or more couples hang out, and it becomes noisy.”

Requiring the owner to be present was also questioned. “Being supervised by the owner isn’t workable,” said Trustee Steve Voloto, who is an Airbnb host and said he would probably recuse himself from any vote. “It’s the opposite of why you’d rent something when you go away.”

An Airbnb map showing current listings on the site in the village.

When it was argued that some communities only require the owner to be nearby, Early described an incident in the village that she said illustrates why that approach doesn’t always work. A group of “at least four couples,” had started a fire in the backyard of the rental property and by 11 p.m. had become very loud, she said. For an hour, neighbors tried calling to complain, but the owner’s cellphone was turned off. Being nearby, Early said, doesn’t necessarily mean owners will be responsive. She also pointed out that residents are often reluctant to call the police if the rental property’s owner is a neighbor.

Trustee Fran Murphy said noise isn’t always the problem. “As residents become seniors they are not comfortable with strangers,” in their neighborhood, she said. “In a residential area, people expect to know who their neighbors are.”

Village economics also factored into the discussion. Trustee Lynn Miller commented that when owners can earn $300 a night for short-term rentals rather than $2,000 a month from long-term tenants, “it ultimately drives rents up across the entire village.”

Editor’s Notebook: Why No Room Tax?

Early noted that an oversupply of overnight accommodations makes fewer properties available for long-term rental. “That’s a concern,” she said. “It can make the village as much a place for weekend people as it is a place to live.”

The mayor agreed. “I don’t want a village full of Airbnbs,” he said. “Limit the numbers; we can definitely regulate it.”

He did, however, point to a positive economic effect of overnight accommodations, commenting that bed-and-breakfast owners take excellent care of their properties in order to attract guests. “And they are not families with children, so there’s less impact on our schools. We should consider that also.”

When Murphy suggested that a referendum be held regarding short-term rentals, Merandy said he thought it was “a great idea.”