Says tax levy should be raised to max

Putnam County Executive MaryEllen Odell presented her 2020 budget on Oct. 3 at the Putnam County Golf Course in Mahopac, calling for the tax levy to be raised the maximum 2 percent, or $1.2 million, to cover rising health insurance costs for employees and retirees.

“One line-item blew our cap,” she said.

Odell began her address by pointing out that Moody’s Investor Service has upgraded the county’s bond rating to Aa1, which she said only five of 62 counties in the state have achieved and is evidence of her administration’s solid financial oversight. “Our focused fiscal vision doesn’t go unnoticed,” she said. 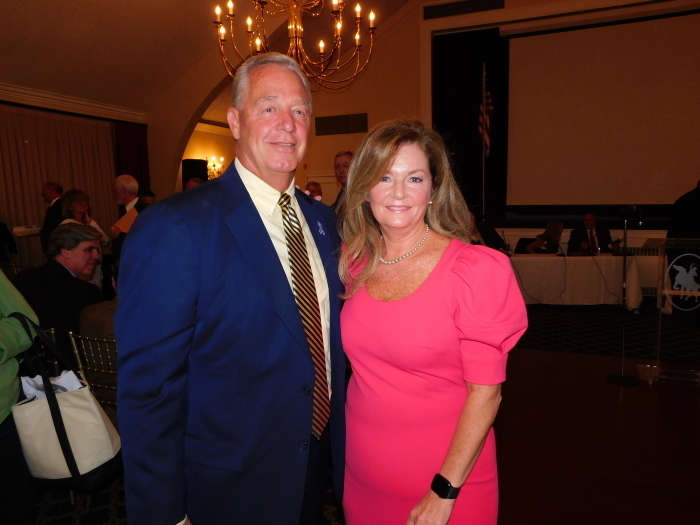 Odell cautioned that because the Indian Point nuclear plant is scheduled to close in 2021, the county will receive less tax revenue for public safety. “Next year when we all meet again, we will have to come up with another $400,000,” she said.

About $10.6 million in spending is earmarked for early intervention and prekindergarten, and $3.2 million for community college chargebacks, through which counties pay about a third of the tuition for each student who attends a community college outside of the county he or she resides in.

Medicaid, another state mandate, will cost $9.6 million. “It’s the single-largest line item in our budget, and we have no control over it,” said Odell.

About $7 million would go toward debt service, which she said would bring the county’s long-term debt down by $24.4 million, or 28 percent lower than when she took office in 2011.

She pointed out that with the addition of early voting, and because 2020 is a presidential election year, which means more participation, the Board of Elections is expected to receive an additional $332,000.

In addition, Odell said she has earmarked $9.1 million for “quality of life services.” That includes $5.2 million for parks and recreation, which includes Tilly Foster Farm, the county golf course, the bikeway and other county-owned properties; as well as funding for the Youth Bureau; and for outside agencies including libraries and the Putnam Humane Society.

About $2.8 million is slated for the Putnam Moves transportation system, $3.7 million for maintenance to roads and bridges, and $1.6 million for snow removal.

What Does It Cost?

Below are some of the county’s projected expenses for 2020. These are not necessarily the net costs to county taxpayers; in many cases, they are offset by fees, reimbursements and grants. For instance, snow removal is projected to cost $1.6 million but the county expects to be reimbursed for about half of that from the state, and the Office of Senior Resources receives millions of dollars for its programs in state and federal subsidies. But because that money also comes from taxpayers, the total cost of running a department or program better reflect how much is being spent.

Of the total $165 million in expenses, Odell said about $52 million (32 percent) is discretionary, while the remaining $113 million pays for mandates.

To balance the budget, Odell proposed taking $3.1 million from the county’s $19 million general fund balance. Department revenue is expected to be $23 million, with state and federal aid at $30 million, and property taxes bringing in $44.6 million. Sales taxes are anticipated to generate $64.4 million.

“History has shown us that small property tax increases, within the tax cap, combined with prudent conservative fiscal spending practices, results in a fiscally strong Putnam County that meets its fiscal and social responsibilities,” Odell said.

During a public hearing that immediately followed the presentation, two residents criticized the county over personnel issues.

Kathleen Foley of Cold Spring pointed out that while some elected officials and department heads receive annual raises, union workers in the Health Department, Sheriff’s Office and other agencies remain without contracts.

“You don’t have the public’s health and safety, and employees, in mind,” she said. The comment sparked applause from union workers gathered at the back of the room.

Reing said he also disagreed with Odell’s statement that “zeros don’t work” when considering how much to raise the tax levy. “That is not a conservative way to run government,” he said.

The Legislature’s committees will review Odell’s proposal throughout the month, and another public hearing is scheduled for Thursday, Oct. 24, at 7 p.m. at the Historic Courthouse in Carmel. The Legislature is expected to vote on the budget on Oct. 29. Odell’s proposal is online at putnamcountyny.com/budget2020.