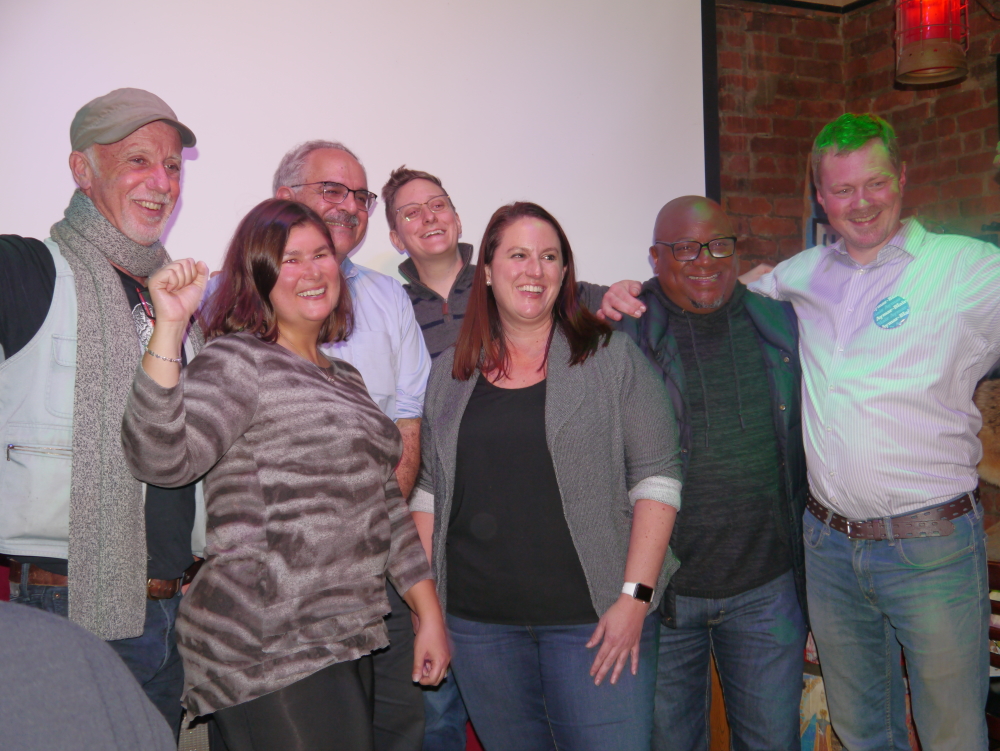 The Beacon Democrats broke out the brooms for the second election in a row, and this time the sweep included the mayor’s seat.

Lee Kyriacou, a longtime City Council member who challenged two-term Mayor Randy Casale, won the job on Nov. 5 with 57 percent of the vote. Democrats prevailed in council races across the city, as well.

Kyriacou is an at-large member of the council who gave up his seat to challenge Casale, an Independence Party member elected in 2011 to the first of two, 4-year terms.

At the end of the night on Tuesday, Kyriacou was surrounded on the stage at the Dogwood restaurant, the traditional Democratic election-night hub, by six newly elected City Council members, four of them repeat winners from two years ago.

Much of the discussion before the election for the mayoral and council races centered on development in Beacon. On Wednesday, Kyriacou said he believed his stance on controlling it and focusing on “quality-of-life issues” swayed voters.

“The key issue that we heard over and over again was development. My view was that we need stronger control and we need to deal with it proactively,” he said. “I think that resonated.”

Kyriacou works for a New York City payments network and said he will keep that job but work more remotely once sworn in as mayor. He said he expects to see immediate changes in establishing “more shared and collaborative” procedures for setting agendas and sharing information when the all-Democratic City Council is seated in January.

Casale said he was thankful for the opportunity to lead the city and pledged to help with the transition to the new administration.

“I believe Beacon is in better condition than it was eight years ago,” he said. As for his future, “I’ll be around town, like I always am.”

Tina Merando, a Republican who was elected town clerk in 2003 (and was deputy clerk for a decade before that), lost her bid for a fifth, 4-year term to Democrat Tara Percacciolo, who won 53 percent of the vote.

That amounted to 162 votes of 2,904 cast. Although absentee ballots have not been counted, Merando would have to win at least 86 percent of the 190 ballots requested if all were returned. The Board of Elections said by Monday it had received 128.

Percacciolo said she was “very excited” about her win and hoped to make improvements such as upgrading the town website. “That’s my biggest thing — bringing the office into the 21st century” and “making it a welcoming place” for the public, she said.

On Wednesday (Nov. 6) Merando declined to comment, other than to say that “it’s no big story. It is what it is.”

Judy Farrell, a Democrat, was elected to the Town Board with 34 percent of the vote after being appointed to fill a vacancy in December, and another Democrat, Robert Flaherty, was re-elected to his second, 4-year term with 44 percent. Republican challenger Corey Lyons received 21 percent.

A challenger, Margaret Parr, who suspended her campaign after announcing she planned to move out of the village, received 21 percent of the vote.

Incumbent Terry Nelson in Ward 1 and newcomer Air Rhodes in Ward 2 ran unopposed. Rhodes will succeed John Rembert. Jodi McCredo kept her Ward 3 seat with 68 percent of the vote and Dan Aymar-Blair won the Ward 4 seat with 67 percent over Independence Party challenger Kelly Ellenwood. The two at-large positions went to Amber Grant, who had the Ward 4 seat, and George Mansfield, who earned his sixth term.

Both Democratic legislators whose districts include parts of Beacon won second terms. Nick Page, who represents Wards 2, 3 and 4, had 72 percent of the vote against Republican challenger Michael Justice, and Frits Zernike tallied 54 percent against Theoni Salotto, likewise a Republican.

Sheriff Butch Anderson ran unopposed and William Grady kept his job as district attorney by defeating Democratic challenger Richard Berube by 814 votes of 66,560 counted, according to the unofficial results.

The ninth is one of 13 districts in New York State, which has 324 Supreme Court justices. It includes Dutchess, Orange, Putnam, Rockland and Westchester counties. Each judge serves a 14-year term.

There were five candidates for four seats; those who received the most votes were Gina Capone, a Putnam Valley justice; Nancy Quinn Koba, an Ossining judge; Lewis Lubell, a Westchester County judge and incumbent; and Steven Milligram, a Monroe judge. Robert Freehill, an Orange County judge and the only candidate not to appear on the Democratic line, was not elected.

Clement VanRoss, the former counsel for the Putnam Legislature who was dismissed in 2017 after 30 years with the county, was elected as one of the two town justices, succeeding  Capone. The Republican defeated Terry Raskyn with 53 percent of the vote.

There were five candidates for two open positions on the four-person Putnam Valley town board. Incumbent Louis Luongo (R) kept his job with 28 percent of the vote, and newcomer Ralph Smith (D) won the other seat with 25 percent. Incumbent Steven Mackay (R) and challengers Anthony Williams (D) and Patty Villanova (L) fell short.

One thought on “Beacon Has New Mayor; Philipstown, New Clerk”