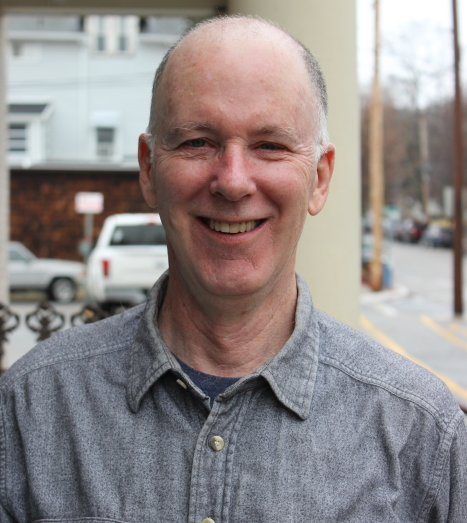 Mike Heintzman will perform “a short evening of short plays” with John Pielmeier at 7 p.m. on Saturday, Feb. 29, at the Butterfield Library in Cold Spring.

How did you and John find each other?
I had written some pieces and, at the last minute before a show, I had an actor drop out of a very specific role: a 12-year-old. I thought, “What am I going to do?” Then it came to me — “John Pielmeier could play a 12-year-old!” He was perfect. It turned out to be the best way to hear the rhythm of the language. We started doing shows together at Butterfield in 2015. We basically wanted to see if we could make the librarians laugh. We didn’t think other people would show up.

What are some of the setups in this year’s show?
Let’s see — we have something on the World Bank using Venmo; a dharma talk for a yoga class; two truckers talking about romance novels; a development director trying to raise $2.5 million between stops on the F train; seniors getting stoned; a guy being interrogated for tearing the Do Not Remove tag off a mattress — and more!

Do you tailor your comedy writing to your audience?
No, aside from sprinkling it with a few local references. I don’t think you want to gear it toward any demographic unless you’re going to get political. Most of my writing is character-driven; I’m better at people than plot. I’m always watching everyone. Just this morning I was studying a guy doing an oil change, thinking, “Where could I put you?”

You’re from North Dakota. What should people know about the state?
Hmmm … I actually don’t pay much attention anymore. That’s horrible! That’s where I come from. It’s surprisingly beautiful? They eat a lot of this Norwegian thing called lefse — I think it’s a pastry [it’s actually a potato crepe]. Also, the governor laughs at my jokes. We went to college together and are still buddies. He was my manager when Ted Mack’s Amateur Hour toured campus, and I wound up winning. He predicted it. He whispered to me backstage, “There are two piano players before you, so you’re going to win!”

After many years in Cold Spring, you and your wife, Patti Pelican, moved to Newburgh. How is that going?
I love it over there. You can feel sort of isolated in Cold Spring sometimes. We hadn’t intended to move to Newburgh but looked at a place and wound up loving it. It’s on a quiet street in a little city, and it feels different. The locale throws you out of your comfort zone — you start to write differently. I don’t like change, but it’s always good for the writing. What I really like about Newburgh is that there are some weirdos walking down the street, such as a guy dressed like Charles Dickens. It’s like being back in New York City. It’s nice to have the weirdness.