More than 150 people joined an online forum on public safety in Beacon last weekend, with many of them calling for budget cuts and other dramatic changes at the Police Department.

Prompted by a June 8 meeting held by videoconference between the City Council and members of the department — two of whom, including the chief, announced their retirements days later — the forum was one of several developments during a week when protests over police brutality and race continued nationwide.

Of the more than 30 people who spoke during the June 20 forum, many asked the council to cut as much as 50 percent from the Police Department budget, which exceeds $5 million annually and accounts for about 25 percent of the spending from the city’s general fund.

Dozens of callers also asked the city to outfit officers with fewer weapons while increasing de-escalation and anti-bias training.

Some shared personal experiences with officers that upset them. Zoe Fonseca, a Beacon resident who teaches elementary school in Newburgh, tearfully recalled standing by her snowbound car two years ago when a Beacon police officer pulled over and said he was about to have her car towed.

Fonseca said she told the officer she had not seen any signs indicating that she couldn’t park on the street during the snowstorm. The officer, she said, retorted: “Do you need signs to tell you not to murder people?”

Later, at school, she said she “had to collect myself before I could teach my students because of an interaction I’d had with someone who should be serving the community.”

Another caller, Sarah Capua, said that three years earlier she had answered her door to find six officers with guns drawn. There had been a report of a shot fired, but “clearly, they were at the wrong address,” she said.

Capua said she asked the officers to holster their weapons before she allowed them into her home but said there were soon five more officers on her lawn with automatic rifles.

She described what she said was a haphazard search of her home, during which two officers drew their weapons again, with “excitement on their faces.”

The episode ended without incident but Capua said Saturday that she was troubled by the “many, many ways that could have gone incredibly badly.”

Other callers at the forum voiced their support for the police.

Patty Turcy-Rose said that the criticism seemed like an organized attack, with callers parroting talking points such as budget cuts and fewer weapons.

“How are the police supposed to protect the community against the so-called bad guys who do have guns?” she asked. “Right now all I’m hearing is extremism.”

Bryanne Figlia, the wife of Lt. Tom Figlia, the Beacon department’s training coordinator, called in to voice her support for Beacon 4 Black Lives and other protestors.

“I understand the deep sense of mistrust,” she said. “The Beacon Police Department, because of what I happen to know of it, has incredible potential to change. Folks are correct when they say that we need a different paradigm. I don’t want the residents of Beacon to believe they are fighting a force that is against them.”

Another resident, Renee Stanko, offered her perspective on calls to “defund the police.”

Charles Demetropolis observed that “we tend to focus always on the negative but we never focus on the positive things police are doing in our community. I don’t think we should be demonizing the police.”

But Robert Kimmel, the next caller, said he felt outreach programs such as Coffee with a Cop have done little to quell feelings of marginalization in Beacon.

“The police have done a good job of demonizing themselves,” he said. “There are some of us who are rejected and despised, and Coffee with a Cop does not help.”

On Wednesday (June 24), City Council Member Terry Nelson, who represents Ward 1, said in an interview that the council hadn’t decided what its next steps would be.

“We want to get a better knowledge of what the department’s procedures are,” he said. “If there are consistent stories [of misconduct], we’ll talk to the department about it.”

However, he added, “this is us doing our due diligence. It is not a coordinated attack against the police.”

Nelson said he hoped his colleagues would consider creating an ad hoc “truth and reconciliation” committee to discuss racial issues. The format was notably used as a platform for victims of human rights violations after the fall of apartheid in South Africa. Nelson said he hoped a local forum could allow residents to more openly “acknowledge your past instead of burying it.

“People need to sit down and talk to each other and acknowledge that we have a problem,” he said. “We’re not talking about it.”

The day before the June 20 forum, the Beacon Patrolmen’s Benevolent Association, the labor union that represents officers, posted a letter addressed to the City Council on its Facebook page. It asked council members to “do your research” and “seek the truth” regarding allegations levied against officers.

The letter referenced a 2006 incident in which a Beacon police officer and another individual were shot. It said the story was being recalled incorrectly as an unprovoked police shooting.

“Many of the incidents as told by speakers of the movement are not accurate,” the PBA wrote. “Misinformation could cause irreversible damage to this city.”

A bench placed outside of the entrance to City Hall nearly two years ago to memorialize a police officer has become a focus of discussion, as well.

It honors Dustin James, a Village of Walden police officer who was killed at age 31 in a motorcycle accident in 2017. James was the stepson of then-Mayor Randy Casale, and the bench was commissioned by the officer’s friends and former colleagues.

Its design includes the “thin blue line” that has been used to show support for law enforcement but also has been placed on the U.S. flag as part of a Blue Lives Matter campaign seen as critical of Black Lives Matter. 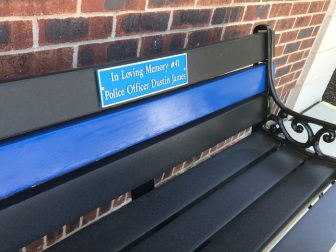 A bench placed outside Beacon City Hall memorializes a Walden police officer who was a stepson of the former Beacon mayor. (Photo by J. Simms)

Mayor Lee Kyriacou said Thursday that city officials have received feedback for and against the bench. “I don’t think anyone objected to it at the time,” Kyriacou said. “The only issue was the blue stripe on it,” which he said “some people view negatively.”

Kyriacou said that numerous memorials have been placed in and around City Hall over the years, each time as an “administrative decision” that did not involve the City Council.

Casale said this week that there was already another bench at City Hall and when he approved the placement of the memorial for James he believed it would provide additional seating.

Casale, who made a number of Facebook posts this week excoriating city officials, said he’s heard that the bench could be moved to the Police Department entrance.

“I would be OK with moving it there as a reminder that all cops should be good cops,” he said. “But if we’re moving the bench just to hide it until somebody complains about it there, that’s not happening.”