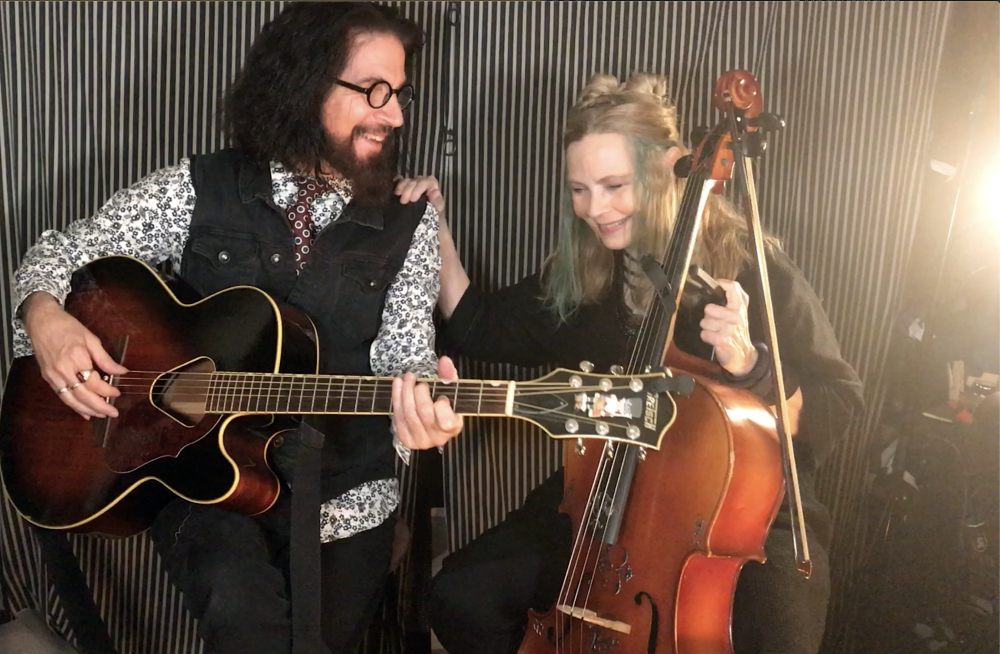 Tink Lloyd and Joziah Longo, who live in Cold Spring, are members of The Slambovian Circus of Dreams, a folk-rock group that formed in 1998 and also includes Sharkey McEwen of Cold Spring, Felipe Torres and Bob Torsello. The couple spoke with me recently about how the pandemic has affected the band. (Scroll down for a newly recorded, “Quarantour” performance of “A Box of Everything.”)

Tink: We were taking a month or two off to be in the studio, not running around all over the place. The universe amplified the trajectory of our plans.
Joziah: We needed to hit the reset button, dig in on unfinished songs, videos and a couple of musicals. It took a lot of forced discipline. Then we found ourselves in a super-extended, slightly more fearful version of what we were already trying to do.

Are you booking shows?
Joziah: We schedule gigs a year in advance, but now everything is shifting to 2021. We were supposed to do Fairport Convention in the U.K. in August; they moved it to next year. We have to figure out how to survive for a year.

What’s been most difficult?

Joziah: Worrying about everybody. We know what our friends are like, and we made a lot of phone calls to make sure they were locking down. We have five kids [now ages 30 to 36], all crazy in their own way. Once we realized they had figured out how to survive this, the kids became our parents.
Tink: Our kids became like hall monitors. They shopped for us, brought food. One of them got sick, but everybody is good now. We’re lucky to be self-employed — except now we’re self-unemployed.

How do you avoid driving each other crazy while stuck at home?
Joziah: We’ve been together since about 1982; the challenge for us is to work together. We can work on perfecting our relationship, making it more functional. Tink has been creating a production company; she gravitates toward the visual. We have a volatile relationship, even when times are good. I grew up in a neighborhood where there was constant fighting.
Tink: He’s from Philly, which was a tough upbringing. I’m from Virginia but my family is Irish and they’re feisty. It’s a little tense, but honestly, that fuels our creativity. He can relax while performing and I can boss him around behind the camera. It kind of defines our teamwork. And I do the dishes! 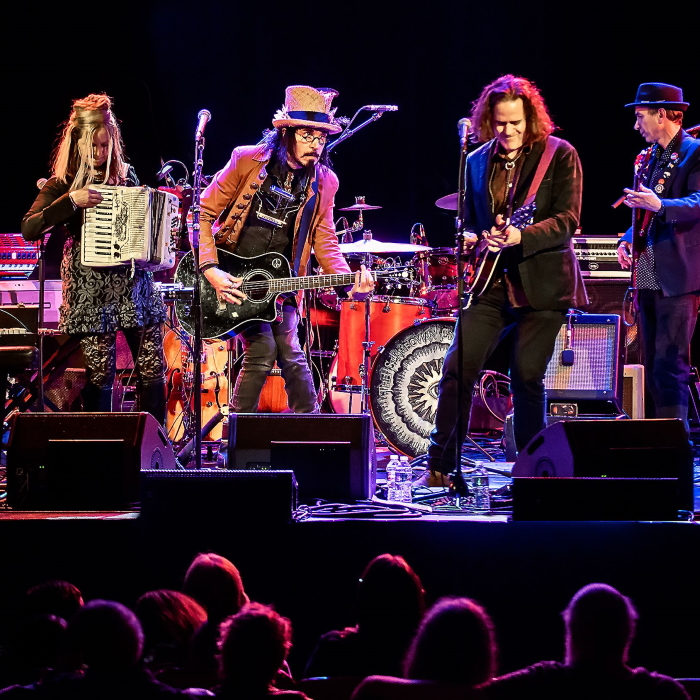 The Slambovians in concert (Photo provided)

What do you do to relax?
Tink: I’ve been doing Ancestry.com. I learned my ancestors were French Huguenots who founded New Paltz.
Joziah: We work until we’re exhausted. We television-binge, like a slightly surreal, pretty extraordinary, Netflix series about Sigmund Freud.

Are the virus and lockdown teaching us anything?
Tink: Someone said Mother Earth told everyone: “Go to your room!” There’s been too much of this cycle of hate, disunity and dysfunction. We’ve had to unplug. The good things that can come out of this will outweigh the difficulties.
Joziah: We hope it slows us all down. We’ve been on a treadmill jumping through hoops, doing what we’re told to do, going to school so we can get a job and work for the Man. We’ve never been able to break the cycle. This is the first time the world has been forced into asking, “What’s it like without all that?” The worst virus is the never-ending political arguing, the addiction to being negative toward everybody. Shut up and do something! Don’t blame others for every freaking thing you did wrong in your life. In a world of almost infinite abundance and resources, and our creativity, how can we make a world where things work?

What is the role of music?
Joziah: Musicians chronicle things but you also have to maintain a certain levity, to escape the anger. Musicians can create things out of nothing, cheer people on, lift them up off the ground. Our job isn’t just to record the facts. It’s to give hope.

What music takes you away?
Tink: Anything unrelated to my work, anything pre-1960s. I love early classical and medieval stuff, simpler chamber music. And old country. Simple is best.
Joziah: Escape for me is Pink Floyd and The Beatles. And Dylan, but not when I’m trying to relax and get refocused.

Will the Slambovians emerge in good shape?
Joziah: This is not pie in the sky. Some 20 years ago we were homeless with five kids. We want to tell people, even if you lost your savings, you didn’t lose anything of essential value. You can come out of this with something better on the other side. As long as you’re not creating negative panic that makes you do something stupid to yourself, you can always start again.
Tink: We had a major shutdown in our lives, but it gave birth to where we are now. The Slambovian Circus of Dreams would not exist if we had not been homeless with five kids. The only way we ever overcome these things is with community. We had family and loyal friends. In this area, it’s important we hang together, because without the support of community, the tribe can’t survive.

You moved to Cold Spring in 2005. Has it influenced your music?
Tink: All the time. We love it here. Our dream when this is all over is to do another concert on the river.
Joziah: It’s our Liverpool. This town is an amazing stage. When we’ve played on July 4, there was no higher or deeper thing for us. There is magic here.

One thought on “The Circus Stays in Town”