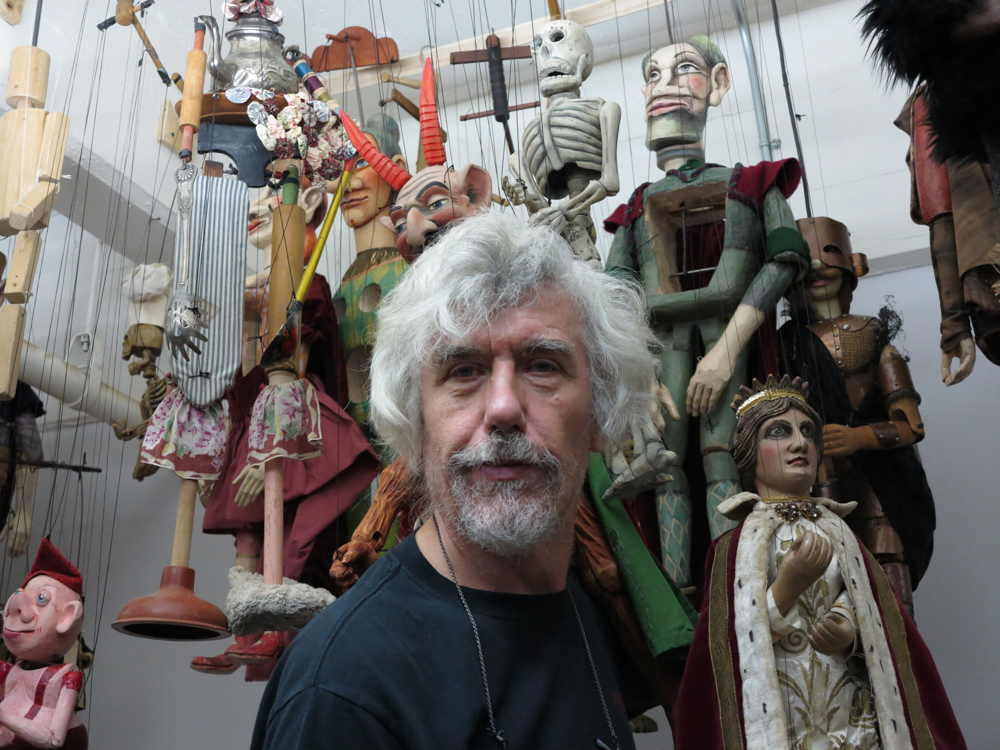 Stuck in an ‘absurd time,’ puppeteer gets back to basics

The life of Vit Horejs — a storyteller, writer, director and founder of the Marionette Theatre — merits its own fable.

Horejs, who lives in New York City, has been visiting Philipstown regularly for decades, enjoying brief, restorative stays at a friend’s place in the woods. He most recently journeyed to the Highlands in March for a two-week stay.

Six months later, he’s still here, making good use of his enforced sabbatical by revisiting storytelling in a contemporary way: recorded via Zoom, and posted on YouTube.

Horejs is accustomed to unexpected changes in scenery. Born in Prague in 1950, he grew up under the communist Czech system and, by the time he was a young man, had grown disillusioned. With forged documents, he was able to travel briefly to Paris, and then England to attend school.

After graduating, he worked as an actor in Prague while hatching plans to leave the country for good. In 1978, sponsored by the American Fund for Czechoslovak Refugees, Horejs landed in New York and found his way to a “black light” Czech-American theater company that paired UV lighting with fluorescent costumes.

Horejs’s contributions were initially as a storyteller, aided by three marionettes he brought with him from Prague, one of them a devil. “I told the director of the Czech tradition of the marionettes, and — it was a very avant-garde production — she said, ‘Oh, do a scene with puppets.’ I did, but the devil needed more activities to do mischief with, so I worked in the other marionettes.”

In 1990, Horejs launched his own touring marionette theater company. Working with other emigres, he wrote, adapted and directed more than 20 plays.

“The marionette tradition was developed all over Europe — there were some influences from England, Italy — there were Shakespeare touring companies,” Horejs says. “The Czech and German versions are similar and both influenced by Marlowe’s Faust. Somehow it all became rooted in Bohemia and elsewhere in Central Europe. It survived because it was usually the only theater to make it to small villages and towns, which live theater couldn’t reach. Little wooden actors could make it there.

“For the Czechs, it became a political question related to their survival,” he adds. “During the national revival period [in the early 19th century], they performed in the Czech language; it became part of the national narrative. They were flying under the radar. Later, all the theater was strongly controlled by the police under the Austro-Hungarian empire, but the puppet theater was too small to supervise closely so they were able to include topical and political jokes.

“This became important later on, during the Nazi occupation, when all the theaters were closed, but some children’s performances survived. It happened again during the communist years.”

In 2016, Czech and Slovak puppetry was declared an Intangible Cultural Heritage of Humanity by the United Nations Educational, Scientific and Cultural Organization (UNESCO). Horejs received a Czechoslovak Society for Arts and Sciences award in recognition of his achievements.

Horejs remembers playing with marionettes as a child. “I had a collection and a little proscenium,” he says. “When I started growing up and getting into ‘theater’ theater, I thought: ‘Oh puppets, that’s over. Doesn’t have possibilities.’ But then I saw this company combining live performers with marionettes or other types of puppets and it was a revelation; it offered so many possibilities and allowed for so many permutations at so many levels.”

The productions staged by Horejs were inventive. One, Golem, incorporated 4-foot-tall puppets. “We had them sitting in cages on wheels, which allowed them to ‘dance,’” he says. The repertoire included takes on classical and contemporary material, including Dvorak’s opera Rusalka, itself based on fairy tale and legend, and Hamlet, which employed a set that was a small carousel. The company also presented it in a site-specific performance at a restored carousel in Brooklyn.

Throughout these years, Horejs made regular forays to Philipstown, staying at his friend’s house in the woods, availing himself of the peace and quiet and, on occasion, performing, including three shows at the Chapel Restoration in Cold Spring and another at the Butterfield Library. He has taken inspiration from the shapes in the North Highlands woods, which, he says, invoke “monsters and goddesses — fairy-tale and legend shapes, a dragon cave. Now I have time to see them, spend time with them, and hope to use them in my next tale.”

Without the option of public performances, Horejs has returned to storytelling. In Prague in the 1970s, he would “spring fairy tales on unsuspecting teenage audiences, with musicians just jamming with me,” he says. “I continued in New York, performing them live in cafes, little theaters and galleries, often with musicians who were hearing the story for the first time.”

With only a few puppets to work with, Horejs again is adapting. Since July, he has hosted a livestreamed session every Wednesday at 3 p.m. on Facebook. Titled Naptime Stories for the Absurd Time, Horejs has been joined by local musicians, including, recently, Lisa Alcott on banjo and Lisa Gutkin on violin.

His plans include mounting a rock-opera production of The Birds, adapted from Aristophanes and the Persian poet Attar, at La Mama in Manhattan, which, along with the Theater for the New City, has been a mainstay in presenting his work. Horejs is working with illustrator Peter Sis on the design of the show. He is also working with the Vaclav Havel Library Foundation on a piece for its annual festival.

Episodes of Naptime Stories for the Absurd Time can be viewed at bit.ly/naptime-stories.