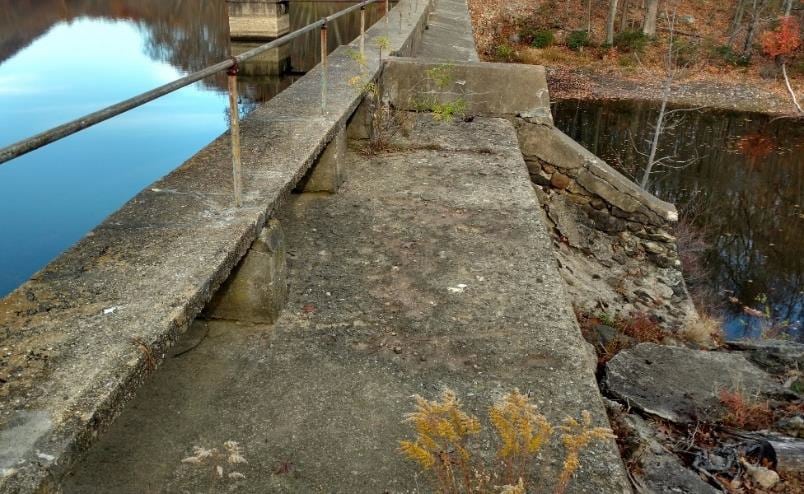 The Cold Spring Village Board heard two bits of good news about the municipal water supply at its Tuesday (Oct. 6) meeting. First, there is much more water available from its reservoirs than previously believed, and second, a study commissioned by the Hudson Highlands Land Trust identified ways to enhance the supply.

Michelle Smith, executive director of the land trust, said the study was undertaken because of concerns about how development in the village might affect supply and demand. In addition, climate change could bring more droughts, she said, which would make the village entirely reliant on its reservoirs.

Cold Spring’s water is gravity-fed from two reservoirs located above the village off Lake Surprise Road. The upper reservoir contains 35 million gallons but village officials believed it couldn’t be released into the system because of a malfunctioning valve. The dam there is slated for major repairs within the next few years.

On Tuesday, Matt Kroog, the superintendent of water and wastewater, reported that he had tested the valve and found it to be working.

That report alone dramatically improved the village supply. The consultant hired by the land trust, The Chazen Companies of Poughkeepsie, calculated that the 31 million gallons in the lower reservoir would be able to supply the village for only two months if not replenished, such as during a drought. Adding the upper reservoir provides an eight-month supply.

The Foundry Brook reservoir, located at the water treatment plant on Fishkill Road, receives water from the two upstream reservoirs and contains an additional 326,000 gallons. The Cold Spring system, which also supplies water to Nelsonville and a handful of homes in Philipstown, uses about 260,000 gallons of water a day.

George Cronk, a Chazen engineer, said that, based on current zoning, if all available parcels in Cold Spring are developed, the demand for water could increase by about 50,000 gallons per day.

The 12-acre former Marathon Battery site on Kemble Avenue is the largest undeveloped tract in the village; Chazen estimated its potential water demand at 15,310 gallons per day, the same usage projected for Butterfield once that development is complete.

To augment its water supply during the dam repairs, Cold Spring has been seeking an agreement with the New York City Department of Environmental Protection to tap into the Catskill Aqueduct, which passes by Nelsonville near Route 301. After more than a decade of negotiations, an agreement has yet to be reached.

While Chazen recommended repairing the upper reservoir dam, Cronk said there may be alternative strategies, especially considering the $4 million to $5 million price tag and the 10 years it could take to complete dam repairs. Alternatives include:

Installation of “flashboards,” or small, temporary dam extensions at the upper and lower reservoirs that could increase total capacity by more than 13 million gallons;

Diversion of the intermittent stream below Jaycox Pond into the water system to add up to 144,000 gallons of water per day during modest storm events and in spring and fall;

Drilling sand and gravel wells in the Clove Creek aquifer to provide up to 200 gallons of water per minute, an amount greater than Cold Spring’s current daily usage.

During the public-comment period, former Trustee Stephanie Hawkins urged the board to revise the village code to require the Planning Board to consider water supply and demand when reviewing development proposals. The village is undertaking an extensive update of its code.

Mayor Dave Merandy said the Chazen study changes how the Village Board will view water supply issues. “We’ll have to discuss tapping into Clove Creek,” he said, especially if the cost is less than the projected $4 million dam repair.

Merandy also favors looking into diverting the stream below Jaycox Pond. “It would give us a little more water; we need to discuss what that would entail and the cost,” he said.