Code-switching is the practice of alternating in conversation between two or more languages or dialects.

It also has come to refer to when people who don’t have power adopt the language or accent or presentation of those who do.

When Jean-Marc Superville Sovak was asked by the Samuel Dorsky Museum at SUNY New Paltz to put together an exhibit addressing the reckoning which has followed the killings of George Floyd and Breonna Taylor, the Beacon artist began by considering what art institutions put on their walls. Whom, he asked, are museums meant to serve? 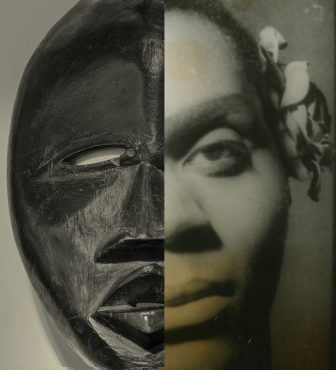 The resulting exhibit, We Wear the Mask — its title taken from a poem by Paul Laurence Dunbar — continues through Nov. 22. It consists of 19 works and artifacts selected from the more than 6,000 objects in the Dorsky’s permanent collection, spanning nearly 3,000 years.

From the start, Sovak, who was born in Montreal to parents who are Trinidadian and Czech, had big questions to ponder. He says he recognized that the pieces in the Dorsky collection were likely not chosen by people of color. “We need to figure out how can we make space for everyone,” he says. “This exhibit is a ‘We see you, we get it’ small action that the museum has taken.”

Although the size of the Dorsky collection was daunting, Sovak says he “started pulling on some threads I found in the collection, and wove them into race and representation. Because there was such a range in terms of the age — from Egyptian funerary figures on up — it felt like a lot to get through.” He says he came to see the curation as more of a discourse on how the museum can look at itself. 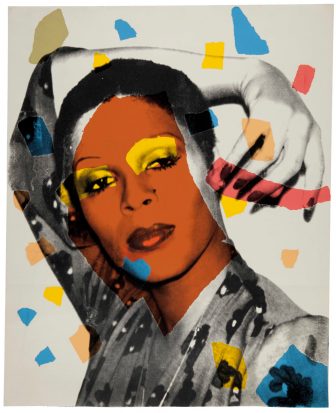 “Ladies and Gentlemen,” by Andy Warhol

He notes that most of the works are not by Black artists. “Obviously institutions, not specifically the Dorsky, were not designed to address people of color because they were not administered by people of color,” he says. “So, it became more about the kind of power dynamics visible in the work.”

Sovak says his job as curator was “finding ways for these objects to talk to each other.” Early on, an engraving by African American artist Henry Ossawa Tanner of Christ walking on water caught his eye. As Sovak explains in a video that accompanies the exhibit, he had to ask himself what, if anything, it had to do with race and representation.

“But then, looking again, I realized what Tanner had done or, more precisely, what Tanner had not done,” he says. “Since Jesus’s face is never defined, it can shift depending on what viewers choose to project. It occurred to me: Was Tanner code-switching from one audience to another?

“Each dive into the collection’s database became an opportunity to find ways in which each artist’s object or each artist’s subject was, in their own way, wearing the mask. The works in the collection are juxtaposed in the form of visual code-switching, exposing the power differentials that brought them into being.” 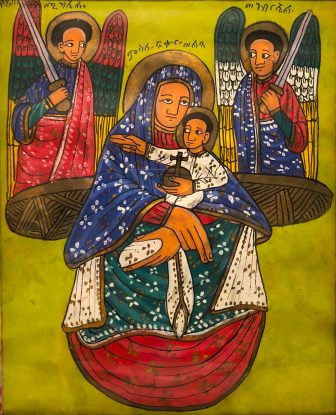 “Madonna and Child with Two Angels” by an unknown Ethiopian artist

Sovak said that during a discussion with a student group he was leading through the exhibit, when he asked if everyone were familiar with the term “code-switching,” a Black student raised her hand and said, “I’m code-switching right now.” Says Sovak: “That gave everything clarity.”

As an example of his process, Sovak paired an African mask and a photo taken during the Harlem Renaissance of the 1920s.

“Talking about race, you’re talking about power, hierarchy, power dynamics, caste,” he explains. “Most museums’ collections of what we call ‘African art’ are problematic, because Africa’s heritage is scattered. How do we address that, besides the obvious solution of repatriating it? I found a connection between the mask, with its idealized aspects of femininity, and the photo, which has something to say about black gay beauty.”

Sovak also paired two sculptures. One, by an African American artist, Richard Howard Hunt, is a casting for a work called “Freedmen’s Column,” which “shows liberty coming always at the price of someone being compromised,” Sovak says. “It’s trying to spread its wings but is already compromised.”

The other sculpture is a bit of a mystery. “Nobody [at Dorsky] knew what it was,” he says. But his research revealed that “it bears an almost exact resemblance to objects from a traditional tribe, the Tuareg, in Mali. They would pitch their tents and hold down the corners using these objects.”

The two sculptures have different functions: “One is very specific but removed from its specificity, and the other has the function of elevating the idea of compromised freedom and liberty. The way they talk to each other has something to say about the way that they came about. That’s what I mean by there are threads — even though the objects might not seem to have any connection to each other. That was the task at hand.”