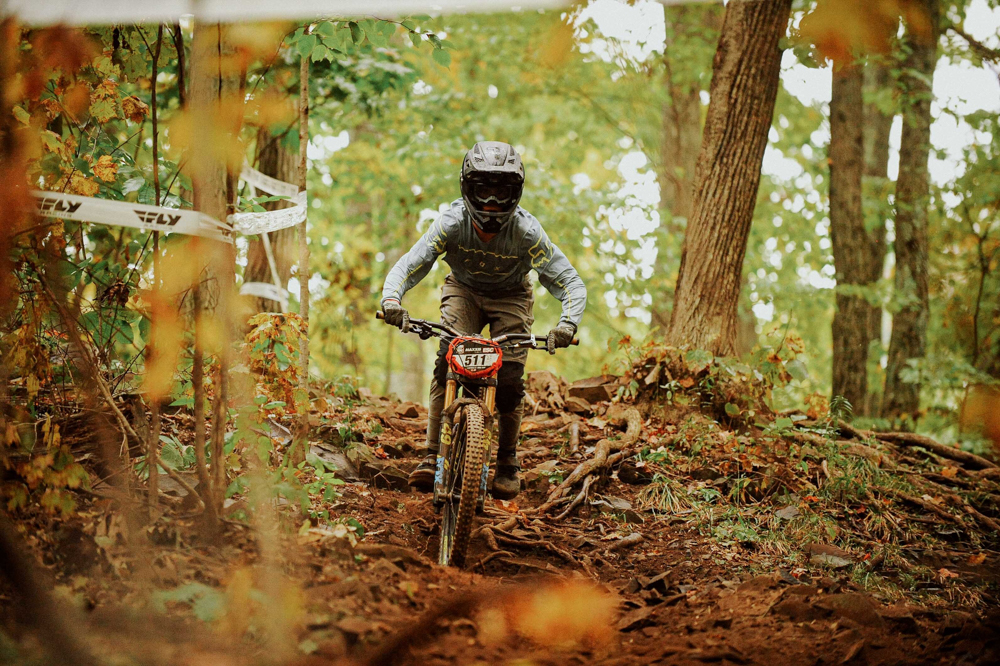 Evan Tighe learned to ride a bicycle when he was 3. Fast forward 13 years: On Oct. 25, the Haldane junior won the 2020 Eastern States Cup downhill mountain bike season championship for amateur males ages 15 to 18. 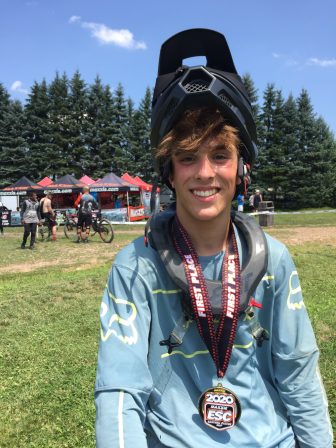 “It’s more stamina-based, flat and up and down but not hard, no difficult terrain,” he said. “It didn’t give me any sort of amazing feeling.”

That changed in 2019 when he entered his first Eastern States Cup downhill race, the last of the season, in Plattekill, competing against other 13- to 15-year-olds.

“It was difficult, with big drops into muddy, rocky landings, super sketchy and slippery,” he recalled. “I finished ninth of 11 racers but I got the adrenaline rush, and I needed more!”

In downhill mountain biking, riders race the clock, coming down the mountain one at a time. The dash can last as long as three minutes. The terrain varies, but “technical” sections with rocks and roots are always a challenge.

Racers can walk the course and take practice runs to determine the best and quickest path for navigating the rough ground, a process called “choosing your line.”

“You want to be smooth because smooth is fast,” Tighe explained. However, “sometimes you have to descend a rough, difficult line to make up time.”

That can lead to crashes. “I go over the bars so many times,” Tighe said. “Before the final, I crashed probably five times during practice.”

Tighe said most courses have a section near the finish with jumps and smoother terrain where speeds can reach 40 miles per hour.

The difference between first and second place can be the blink of an eye. “I won one race this year by half a second,” he said. 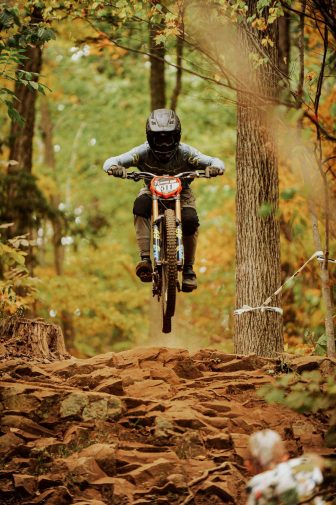 In winning the six-race 2020 season, Tighe had three first-place finishes, two seconds and a third. The division includes about 40 racers and each race typically draws about 15 competitors.

By winning the championship, Tighe will automatically move up a division in 2021. He said he trained hard over the winter, including lifting weights, to improve from his ninth-place finish in 2019. He also acquired a secondhand 2019 GT Fury, which sells new for about $8,500. The bike has a carbon front triangle and aluminum rear triangle.

Tighe said he has a friendly relationship with other racers, He narrowly beat Matthew Krimmel for the season title, finishing just ahead of him in the last race. “If he had beaten me, he would have won the season,” he said. “It could have been super competitive, but we’re friends.”

Update (Nov. 20)
Tighe Is Off to Mountain Bike School

Tighe was accepted this month for admission to the Killington Mountain School in Killington, Vermont.

The school offers college-preparatory academics as well as instruction in cycling, skiing and snowboarding. Tighe began virtual classes last week and will transfer to in-person courses in Vermont on Nov. 30.

Tighe will also compete as a member of the school’s downhill mountain biking team during the Eastern States Cup 2021 season.