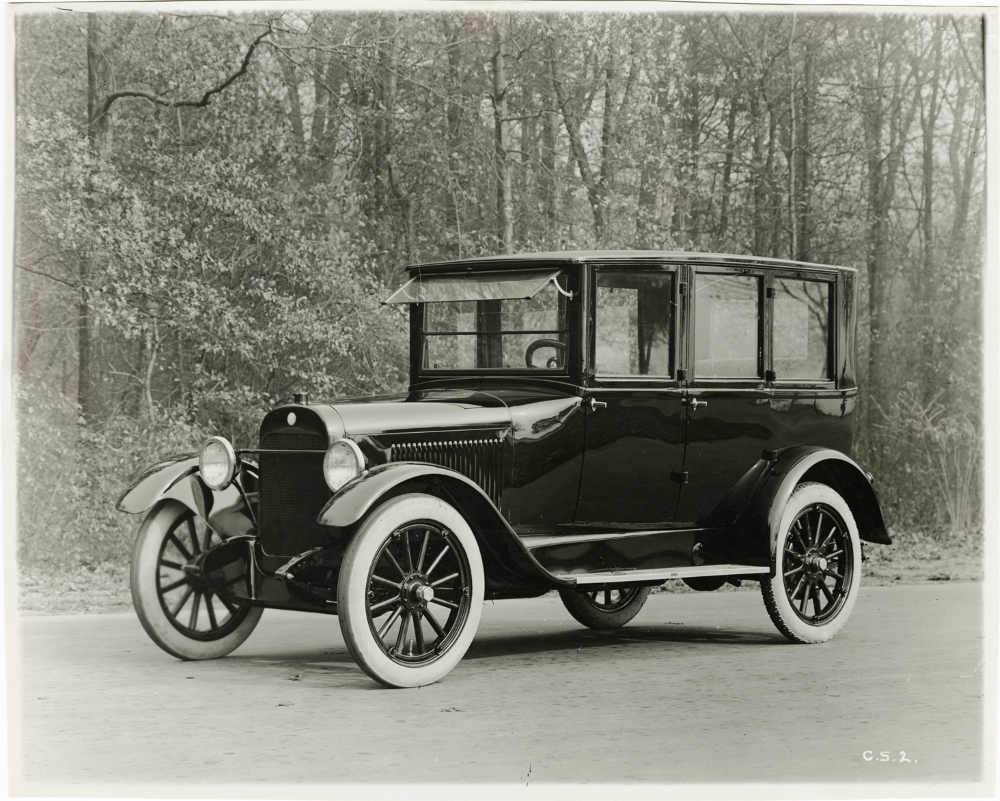 In 1921, a fire in Garrison destroyed a Chalmers sedan such as the one shown here. (Detroit Public Library)

A Hudson River Railroad conductor kicked off four intoxicated men at Cold Spring from the late-night Saturday train from New York City to Poughkeepsie. According to a report in The Cold Spring Recorder, one of the four claimed to have lost his ticket, which prompted an argument. When the conductor attempted to remove the man at the Cold Spring stop, his friends tried to intervene. The next week, the men, who alleged someone had fired a gun at them as they disembarked, sued the railroad. 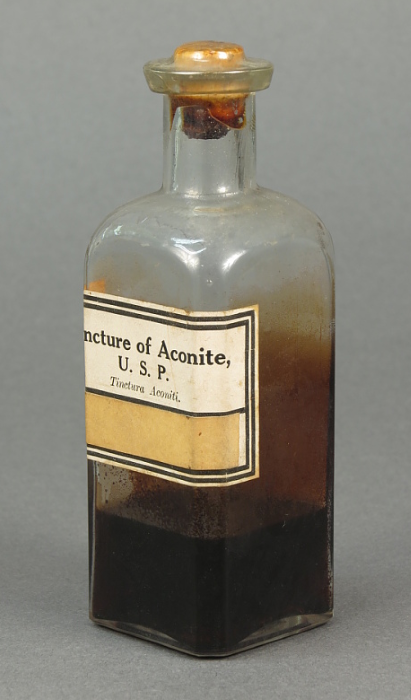 Don’t apply at home: A bottle of tincture of aconite

Henry Baxter, an employee of druggist Charles Boyd, injured both eyes with tincture of aconite. [The patent medicine, applied with a compress, was said to cure a sty or other abscess.]

In an advertisement, Boyd noted that along with patent medicines, he stocked envelopes, pens, ink, brushes, perfumes, combs, cutlery, coffee, tea, spices and California wines sold “for medical purposes only.”

The little Larkin boy died from burns he suffered when his clothes caught fire at his home on Furnace Hill. Mrs. Larkin had left briefly to fetch a pail of water when the boy ran from the house, screaming. A neighbor extinguished the flames.

A roofer was seriously injured when he fell 40 feet from the new Methodist Church and hit the frozen ground.

Main Street lost two businesses when the clothing store of Frank Levy and the shoe store owned by W.A. Strong each closed.

George Butler, a student at the Foundry School [now the Putnam History Museum], suffered head injuries when he fell down the steep bank just above the foundry barn.

A cold snap brought the mercury to zero, allowing the safe crossing on the ice of the river to West Point by horse and loaded sleigh.

James Myers issued a challenge of “an impartial trial” to other sewing-machine agents whom he said were disparaging his Davis model. The agent for Singer’s Improved Family Sewing Machine accepted, with the loser paying the cost of renting Town Hall for the sew-off.

R. Wilson advertised that he was selling oysters by the quart at his saloon two doors above Fair Street. 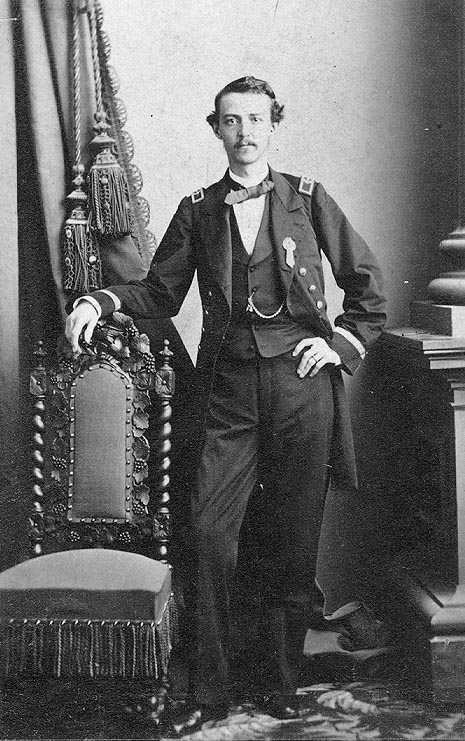 Capt. Richard Meade, shown here about 1862, spoke in 1871 in Cold Spring about commanding a steamer in Alaska

Capt. Richard Meade of the U.S. Navy presented the first lecture to raise money for the new village reading room. He spoke about Alaska, where he spent many months in 1868 in command of the steamer Saginaw charting the coast. [Later in 1871 Meade began a two-year command of the Narragansett in the South Pacific. He finished his career in 1895 as commander of the North Atlantic Squadron.]

A group of boys ages 6 to 10 were running on broken pieces of ice in the slip opposite the Pacific Hotel when one, Irving McCoy, fell into the water. A classmate, Joseph Maher, attempted to rescue him but also fell in. He managed to climb back on the ice. A third boy, Alexander Trimble, organized a chain with the clenched hands of the other boys to pull out McCoy, who cried out, “I want to get dry!” Railroad employees who found the freezing boys without pants or boots in the freight house took them to the station to thaw.

On Jan. 22, at the suggestion of a local banker, 19 businessmen met to form a fire brigade, the Cold Spring Hose Co., No. 1. Its first piece of equipment was a hose cart pulled by members that was stored in the rear of J.G. Southard’s office on the corner of Garden and Main streets.

A band called The Beverages provided music at the Putnam County conference of the state prohibition committee.

Because of the new state income tax law, the assessment of personal property in Philipstown dropped from $350,000 in 1920 to zero in 1921.

L.K. Palen and Jacob Glick reported that, during their canvass of local businesses, 35 men pledged to pay 50 cents per week to hire a second police officer. A week later, the Village Board appointed George Hill, a World War I veteran, for $18 per week.

At the same meeting, a trustee moved that Hill be instructed to enforce a ban on target shooting in the village with rifles, shotguns or pistols. The trustees also changed the regular police officer’s hours to 6 p.m. to 6 a.m.

Rep. Hamilton Fish Jr. telegraphed the editor of The Recorder to report that the construction of a road between Beacon and Cold Spring had been placed on the state schedule. “A good state highway along the river has been the dream of residents of Cold Spring for years,” noted Publisher Otis Montrose.

Edward Groves, a lifelong Garrison resident, died at age 50. He was the telegraph operator in the tower near the Garrison station and a charter member of the Loretto Council of the Knights of Columbus.

Members of the Odd Fellows lodge in Beacon were compelled to cook a chicken dinner for members of the Philipstown lodge after losing a best-of-seven euchre tournament.

The owners of the Pilson property next to the railroad tracks in Depot Square had the rear portion of the house torn down, including the chimney.

The Cold Spring Textile Works was ready for operation except for the arrival of the boiler and the completion of the 85-foot smoke stack.

The proprietor of Schlessel’s Dress Factory said he had turned down two contracts because of a lack of operators.

Eugene Travis, the state comptroller, was among those indicted on charges of paying a bond broker $230,650 more than necessary. The Recorder noted that Travis, a few years earlier, had conducted an audit of the Cold Spring finances and criticized the board for not recording a $2 charge for special police duty and a $5 charge for a wreath of flowers purchased in memory of Julia Butterfield. [The charges against Travis were later dismissed.]

Le Grand Ketcham Wilson, 87, who had been an elder at the Presbyterian Church in Cold Spring for 53 years and supervised its Sunday School for 21 years, died in Florida.

Carlotta Maury presented St. Mary’s Church with a silver Communion service owned by her father, who served as its rector in 1865.

The Knights of Columbus held a movie night to screen films about the activities of the National Catholic War Committee. It also added a pool table to the remodeled second floor of its building.

The Recorder reported that the New York Central Railroad planned to electrify the railroad from Harmon to Poughkeepsie and also straighten the curve at Garrison and remove the tunnel.

The Village Board voted to have signs made offering a $10 reward for the arrest and conviction of whomever was destroying the street lights.

The board voted to have the village president confer with the foreman of the Cold Spring Fire Co. “with regard to improvement of the fire service.”

The dramatic company from St. Luke’s Episcopal Church in Beacon performed The Adventures of Grandpa at the St. Mary’s parish house.

Fire destroyed William Church Osborn’s garage and electric-light building, as well as a Chalmers car belonging to Frederick Osborn. Neighbors fighting the fire were hampered by the cold and lack of water pressure.

State troopers raided the former pickle factory at 1 Market St. at 4 p.m. on a Sunday afternoon and arrested 17 men on charges of running an illegal craps game. They also seized a table, lighting fixtures and $800 in cash that was deposited in the village poor fund. Two of the accused were charged with being common gamblers (including a Beacon man whom the judge told to “stay out of Cold Spring”) and the 15 others with disorderly conduct.

The Cold Spring Fire Co. No. 1 celebrated its 50th anniversary. The Rev. E. Floyd-Jones was the only surviving charter member.

James Bailey, newly elected as a state Supreme Court justice, sold his interest in Bailey & Haar at 37 Main St. to his partner, Adrian Haar, who changed the name to the Haar Agency.

John Donohue, the Putnam County district attorney and a lifelong Garrison resident, was appointed by Gov. Thomas Dewey as a Putnam County judge.

Mayor Anthony Mazzuca of Nelsonville said the New York Trap Rock Corp. had agreed to donate four acres of land to the village for a park.

A Frenchman, Michael Tregoire, 27, who worked as a chef at the Garrison Inn, was struck and killed by a train while hunting.

The Cold Spring Fire Co. No. 1 celebrated its 75th anniversary with a dinner and dance at Dutchess Manor.

Spc. 4 Donald Dahlia, of Church Street, arrived home after being discharged from the U.S. Army following 13 months of service in Vietnam.

Fred H.M. Dunseith celebrated his 91st birthday. Born in Nelsonville in 1880, he attended the Foundry School. As a young man he moved to Scranton, Pennsylvania, where he taught school for 40 years. He was the author of a local history called Story of Main Street from Dock to Mollysville.

The Rev. James McCarthy, a pastor from Hopewell Junction, spoke at Graymoor in Garrison about the sexual revolution. “The older attitude that sexuality is an unfortunate element in human nature that no one talks or thinks about has had some unfortunate results,” he said.

A groundbreaking was held for the new sewage treatment plant on Fair Street.

Father Boniface Goldhausen, 90, the oldest Capuchin priest in the U.S., died at Graymoor.

After swearing-in ceremonies, the Philipstown Town Board consisted entirely of Democrats for the first time.

Leslie and Brian Heanue welcomed a 7.5-pound baby girl, Samantha, in the middle of a blizzard. When the ambulance couldn’t get up their driveway on Indian Brook Road in Garrison, the couple trudged through 2 feet of snow to the street.

A storm that brought 2.5 inches of rain, combined with the melting snow, caused heavy damage to East Mountain Road North in Philipstown and Healy Road in Nelsonville.

The Cold Spring Fire Co., No. 1 celebrated its 100th anniversary. It had 145 members (down from a peak of 250 in the late 1960s), including 18 with at least 50 years of service. Dominick Dirito was in his 71st year of membership, the longest tenure in company history. 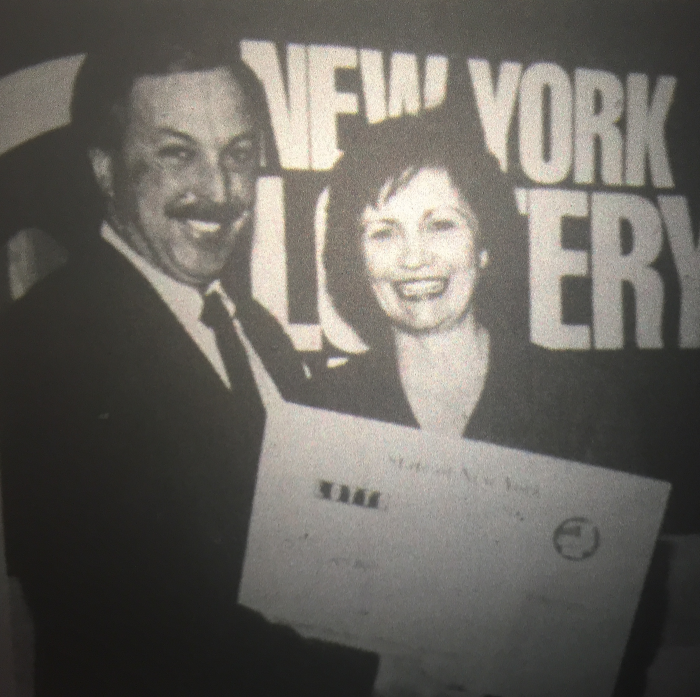 Jeff Bell of Cold Spring won a $4 million Lotto jackpot with a quick-pick ticket he purchased at ShopRite in Fishkill. Jeff was the program director for The Children’s Village in Westchester County and his wife, Pat, worked in human resources at Hudson Valley Hospital. The couple elected to receive 21 annual payments of $190,400, before taxes.

A Garrison woman, Evelyn Mackey, was killed in a head-on collision on Route 9 near the Bird & Bottle Restaurant in Garrison. The driver of the other vehicle, Charles Mackay, of Wappingers Falls, was critically injured.

In another Route 9 crash near the Barnside Deli, the driver of a Ford Explorer was killed after he collided with a Leprechaun tour bus.

Hudson House owner Gary Pease hired newlyweds Joseph and Kathleen Klingelsmith as innkeepers. Joseph had been executive chef of the Polynesian Hotel at Disney World and Kathleen, a native of Rockland County, worked at the Orlando park in guest services.