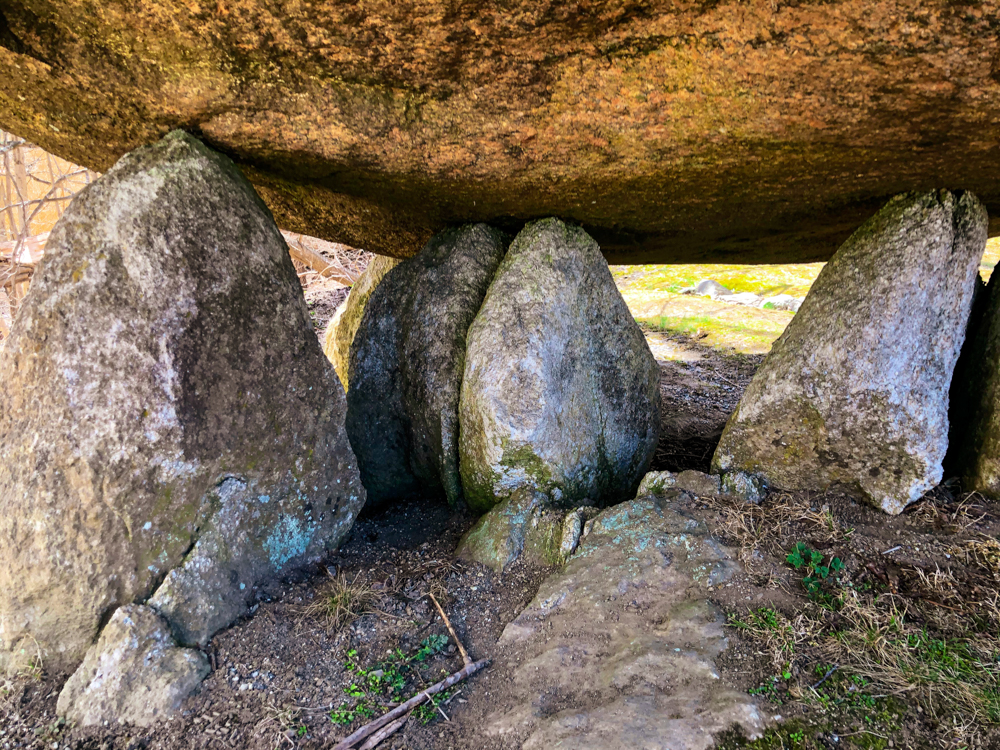 How did this happen? Underneath the Balanced Rock in Kent (Photos by B. Cronin)

The Hudson Valley contains an unusually high number of eerie structures, spooky legends and cursed waterfalls, which is probably the result of ancient, seafaring Celtic druids who arrived hundreds of years before Henry Hudson and erected dozens of megalithic energy vortexes to access forbidden eldritch dimensions.

Or it could be the fact that not enough people spoke Dutch.

That’s the hypothesis advanced by Michael Adamovic, anyway. The author of the newly published guide, Hudson Valley History & Mystery, notes that the region has hosted four distinct cultures over the past 400 years. First, the Native Americans, who had already been here for quite some time. Then the Dutch, the British and the Americans, after independence.

Each culture left its own mark on the landscape and had its own legends. While the original 13 colonies had the same Native American-to-British-to-American succession, the Hudson Valley stands out because of the Dutch, who adopted Native American words and legends, with much lost in translation.

Adamovic, a naturalist and photographer who lives in Highland, says he has always been drawn to Hudson Valley sites with mysteries, legends and ghost stories attached. But sorting fact from fiction — not to mention trying to locate some of them based on vague historical descriptions — was a challenge.

“I figured, why not help people out? Tell them about the history, the legends and directions,” he says.

All 20 sites in the book are publicly accessible, although some require permits to visit. Many will be familiar to Hudson Valley residents and frequent visitors, but the legends are not as well-known. It will be hard to look at Hessian Lake in front of Bear Mountain the same way again after learning why it used to be called “Bloody Pond.” And the book solves two mysteries that have bugged me for years: Why the gorges of the Catskills are referred to as “cloves,” and why maps from the 19th century refer to Breakneck Ridge as The Turk’s Face. (Sorry, no spoilers.)

Lesser-known sites include the Claudius Smith Den in Harriman State Park, where the eponymous outlaw who was known as “the scourge of the Highlands” and his band of thieves made their lair and buried their loot. Archaeologists in the early 20th century found hundreds of artifacts within the den, but caches of treasure supposedly remain, and legends speak of the ghostly skeletons of Claudius Smith and his brigands that periodically return to search for them. 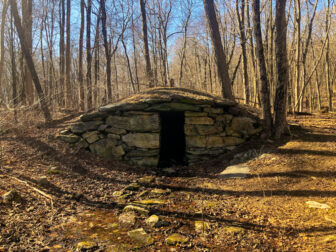 The Winter Solstice Chamber, near Kent

Quite a few ghostly canines are said to haunt some sites, including Indian Brook Falls in Philipstown. And it seems that there isn’t a single waterfall that doesn’t have a legend involving a heartbroken Native American woman throwing herself off it. Is this the same legend attributed to multiple locations? Probably not. Based on his research, Adamovic estimates that about half of them are based on an actual suicide, while the remainder were likely invented during the Victorian era, when white storytellers wrote new Native American legends as a way to attribute a sense of magic and wonder to a landscape that had been emptied of Native Americans.

The stone chambers found throughout the woods of Putnam County are probably just Colonial-era root cellars, he says, but there are still weird, unanswered questions to examine. Why do they only appear in and around Putnam County and nowhere else in the Hudson Valley? Why are so many of them aligned with astronomical events such as the winter solstice?

Then there’s Balanced Rock in Kent, a 90-ton boulder perched on a series of stones. The boulder is clearly a “glacial erratic” — massive rocks moved by ice to places where they don’t fit, geologically. The leading hypothesis — which Adamovic has discarded — was that Balanced Rock’s curious placement was just where the ice randomly left it. But after examining the site, Adamovic says he isn’t so sure. 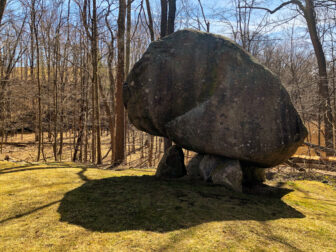 “I’m conflicted,” he says. “The stones that it rests on look like they were carved. The idea that it could be placed by chance seems incredibly unlikely.”

So who put it there? Adamovic thinks it was probably Native Americans, although a recent episode of a History Channel series called Ancient Aliens concluded it was ancient Celts who came to the Hudson Valley 2,000 years ago and are also responsible for the stone chambers. (Having watched the episode, I regret to announce that Ancient Aliens is not, in fact, a credible source.)

Claudius Smith’s treasure may have been dug up already by someone smart enough to not announce the discovery, but there are still riches to be found. To promote the book, Adamovic hid a prize near one of the sites in the book and wrote a poem in code (see below) with clues. As of Thursday (March 25), the treasure was still out there, although he says “we’ve had a couple of close calls.”

Use a copy of Hudson Valley History & Mystery and your skills as a code breaker to decipher the riddle and locate the treasure hidden somewhere in the Hudson Valley/Catskill region:

Prepare to embark on a quest

To locate a treasure chest

That you’ll have success

When you come to the end

One thought on “Out There: Ghost Dogs, Bloody Ponds and Lost Treasure”