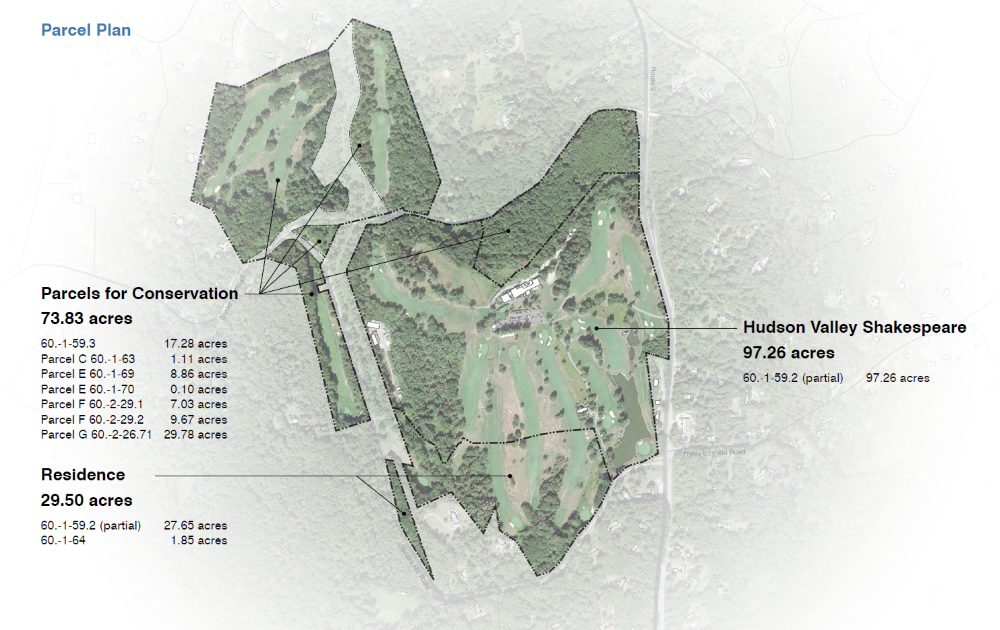 Chris Davis expanded his gift to HVSF to 97 acres.

The Hudson Valley Shakespeare Festival, which hopes to move next year from its longtime home at Boscobel to donated land at The Garrison golf course, told the Philipstown Planning Board on May 13 that it had made a few modifications to the proposed expansion.

The HVSF is in the early stages of seeking town approval for its plans. The seven-member Planning Board is reviewing a state-mandated environmental assessment form, but the Town Board must change the zoning on the site, at Route 9 and Snake Hill Road in Garrison, to allow it to be used as a performance space.

At the Planning Board session, which was held by Zoom and lasted nearly three hours, board members worked their way through Part 2 of the three-part environmental assessment. The meeting was devoted to the HSVF project; the board will continue its review at its monthly meeting on June 17.

Chris Davis, who owns The Garrison, last fall donated 52 acres of the 200-acre site to HVSF. He initially planned to downsize the golf course from 18 to nine holes but last month announced he instead would close the course later this year and donate 74 acres to the Hudson Highlands Land Trust for conservation. He also expanded his gift to the HVSF to 97 acres. The remaining 30 acres will be used for a private residence.

HVSF told the board that, based on feedback at earlier meetings, it had moved a proposed entrance on Snake Hill Road farther west to improve traffic sight lines. It also said that feedback and the additional land from Davis allowed it to reduce and split the number of buildings for performer and guest lodging. 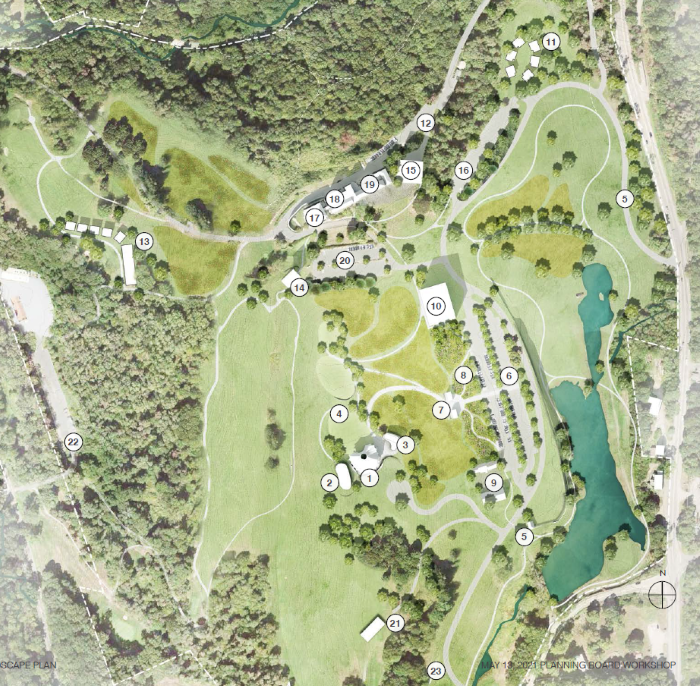 The revised plan reduces the number of performer lodging and splits them into two areas at upper right (13) and upper left (11) and creates a new Snake Hill Road entrance at bottom center (23).

HVSF said it also plans to reconfigure the Route 9 entrance; devote more acreage to meadows and trees; and remove the golf course pro shop and cart barn and expand an overflow lot by 20 spaces.

Neal Zuckerman, who chairs the Planning Board, noted during the meeting that it had “received a voluminous set of memos” from residents in response to the HVSF proposal but that “no one is taking a tally of pro and con; that is not the purpose of this board. The purpose is that we get insight about the project. We are reading your memos for thoughts to help us think about the impact of this project.”

Once the board completes its environmental assessment, it will hold a public hearing, he said. The board has hired a consulting firm, AKRF, to assist with its review of documents and studies submitted by HVSF regarding topics such as traffic and noise.

Kim Conner, a board member, thanked the HVSF team for being responsive to feedback. “I appreciate that you listened to the comments that we had and adjusted things like the housing and the Snake Hill Road entrance,” she said. “It’s not so common that an applicant actually listens.”

Davis, who attended the meeting, responded that “we listen to the comments because we’re neighbors and know many of you in the community and as friends. We don’t want to embarrass you and we want to do something that we’re all proud of.”

If it can get approvals from the town, HVSF said that in May 2022 it would install a temporary tent at the site for the summer season; repair the entry roads; upgrade the parking lots; add lighting; and install basic landscaping.

With further permits, in 2023 and 2024 it would construct a permanent tent with slightly fewer seats than the Boscobel tent, which has 535; a 1,200-square-foot box office and welcome center; and a 4,000-square-foot “back of house” building with dressing rooms for the actors. It also plans to add a 20-room hotel.

The Garrison has a restaurant and events venue that will remain in operation. That part of the project would remain for-profit and stay on the property tax rolls; the remainder of the parcel — about 170 acres with a market value of about $8 million — presumably would be removed because of the nonprofit status of the HVSF and the land trust.

For the 2021 season, HVSF will perform under its tent at Boscobel on Route 9D in Garrison, where it had operated for 32 summers through 2019 before its 2020 performances were canceled because of pandemic restrictions. It also is moving its administrative offices on Tuesday (June 1) from Main Street in Cold Spring to the manager’s office at The Garrison.