Beacon’s police department and the Dutchess County Sheriff’s Office both named the hiring of more Black, Latino and female officers as a goal in reform plans they crafted in response to an order last year from Gov. Andrew Cuomo.

The Beacon department, which patrols a city whose population is 19.5 percent Latino and 14 percent Black, has four Latino, two Black and two female employees among its 31 officers and detectives.

A list of 148 positions provided by the Sheriff’s Office in May showed 20 females, five Latinos, two Blacks and two Asians. White males held the rest of the positions.

One step toward increasing diversity on both forces will come on Sept. 18 when Dutchess County offers its first civil service exam since 2017 for deputy and police officer candidates. Based on figures released on Aug. 6, many more racial minorities and women will take this year’s test than the last time it was offered.

The civil service exam is used to create a pool of qualified candidates from which law enforcement agencies can fill openings. Beacon Administrator Chris White said last month that the city had openings for six officers.

There were 1,380 applications, an increase of 57 percent. The test also drew more white applicants, 608 compared to 447, the county said. 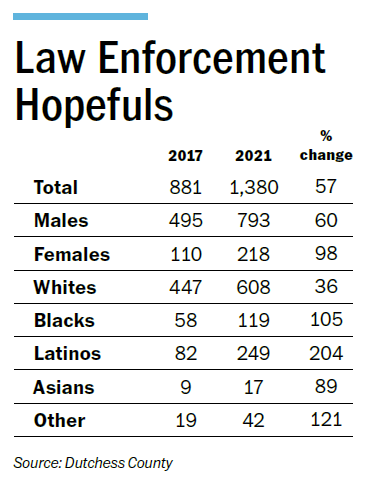 Having a diverse applicant pool is important because “who enforces the law matters,” said Taneisha Means, an assistant professor of political science at Vassar College whose areas of interest include diversity in legal systems.

Means said she doesn’t believe diversity training for white officers already on the force is enough to improve policing. “When you look at the data, they [minority and female officers] are policing communities differently,” she said.

“We are now living in the most diverse country that we’ve had, and our nation’s powerful political and legal institutions must reflect that diversity, including police departments,” she said.

Dutchess County used a number of strategies to boost applications and improve the diversity of the pool. It waived the $25 exam fee and will give applicants up to five years after they are hired to complete the 60 college credits required for the exam. The county also recruited applicants on social media and at Hudson Valley Renegades games, and conducted outreach at housing complexes.

The Dutchess County Sheriff’s Office also has offered preparation classes for the exam and physical fitness tests in collaboration with local police departments, including in Beacon.

In the wake of the murder of George Floyd last year by a Minneapolis police officer, Cuomo ordered municipalities to study their law enforcement policies and issue reports by April 1 on reforms to, among other goals, “eliminate racial inequities in policing.”

In addition to diversifying the race and gender of its officers, Dutchess County’s plan recommended establishing a civilian review board and expanding the involvement of social workers and other non-police staff on drug overdose and mental health-related calls. The county’s 2021 budget includes funding for body cameras for the Sheriff’s Office.

In April, Beacon’s Police Department hired a specialist to assist officers on calls that involve mental health issues and addiction, one of the recommendations in its reform plan. Officers have been issued body cameras since 2018.