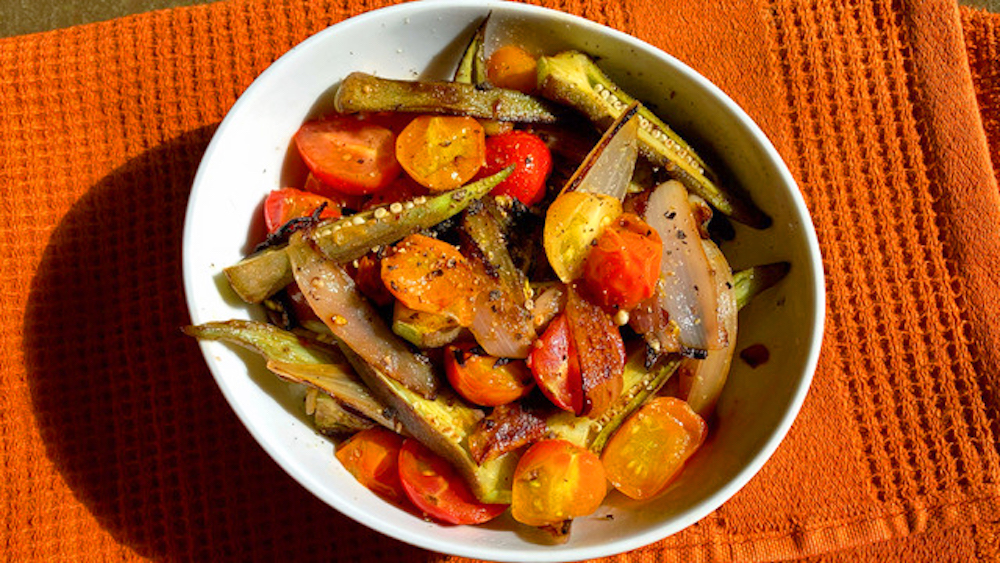 Okra with Shallots and Cherry Tomatoes

For a simple vegetable, okra comes with a lot of reprehensible emotional and cultural baggage.

First, it’s a symbol of America’s racist past. Although its geographic origins are disputed, its introduction to the New World was the result of the West African slave trade.

Unlike beans, cassavas and yams — the most commonly recorded rations on slave ship manifests — okra became a potent cultural talisman and bittersweet reminder of a forced exile.

According to folklore, captive African women hid okra seeds in their hair to plant in subsistence gardens in slave quarters in the West Indies and American South; a “shadow world of cultivation,” as it has been called. Okra does produce voluminous, easy-to-grow-and-transport seeds.

Bolstered by the skills of many talented (and generally unheralded) enslaved chefs, a rich cuisine developed and informs African American culture and foodways to this day, particularly along the southern Atlantic coast and in the Caribbean.

I grew up in Louisiana, where okra means gumbo, which is no surprise since the word gumbo means “okra” in French-colonial patois.

Okra seems to be either loved or reviled. Its “slime factor” is the most commonly heard criticism. Fresh cut and even dried okra, when stewed, does create a sticky, mucilaginous juice, but that is useful to thicken soups and stews — a handy trick when called for.

However, if you’re hoping to avoid that quality, there are a couple of easy tips to keep in mind.

This quick-frying technique accentuates okra’s delicate grassy flavor, especially if you look for fresh small pods, i.e., 3 to 4 inches maximum. Stay away from longer pods. The bigger they get, the more closely okra resembles its botanical cousin, balsa wood, in texture and taste. Slice these small pods once, lengthwise, if at all. Small, whole, fresh pods do well on their own, and you’re pretty much guaranteed a tender crispness.

Second, okra’s viscosity develops in primarily neutral pH-to-alkaline environments (such as stews or soups) and can be mitigated with the addition of acidic ingredients, particularly tomatoes.

For this week’s recipe, a summertime go-to for field-fresh okra, small split pods are quickly stir-fried with shallots and garlic until just barely caramelized. (If you have a wok, this is a good time to break it out.)

To finish, we throw in a pint of sweet cherry tomatoes for a couple of minutes until they give up some juice, followed by a splash of cider vinegar. That’s it. The whole process takes less than 15 minutes.

If you’re feeling frisky, add a pinch of red pepper flakes or smoked paprika. A little bacon won’t be out of place and was almost insisted on by the late doyenne of southern cooking, Edna Lewis. But none of these are necessary. Served alone as a side or over steaming hot white rice, it’s yours to enjoy. Just remember to thank and honor those who brought it here.

Sourcing note: Although okra is available in many markets, Davoren Farm in Cold Spring has, for the last couple of years, grown the best okra I’ve had (in addition to great peppers, corn, squash and such). It operates an occasional farm stand; register at davorenfarm.com to be notified.

Okra with Shallots and Cherry Tomatoes

Heat olive oil in a wok or large skillet over medium heat. Add garlic and saute until golden. Add okra and shallots and season with salt and pepper. Cook, stirring frequently until okra is tender and just browning in some areas (about 10 to 12 minutes). Add cherry tomatoes and cook until just bursting (about 3 minutes). Finish with a splash of cider vinegar. Serve hot alone as a side or over rice for a satisfying vegetarian meal.