When Peter and I bought our house in Philipstown 21 years ago, a spindly little pear tree grew in the yard. Whoever planted it had situated it so far under the drip line of a giant sycamore that by the time we acquired it, it was craned over like the Leaning Tower of Pisa in an effort to grab a few sips of sunlight.

Peter and I discussed cutting it down, but we were busy with babies in those days, and put it off.

The next fall, that tree eked out a handful of pears. Like their host, they weren’t much to look at. I harvested a few anyway, peeled off their spotty skin, carved out the insect-holes, folds and stone cells (those hard but harmless little clusters that form in pear flesh), and cut the remaining fruit into uneven chunks.

The flavor took my breath away. Without a doubt, these were among the most ambrosial pears I’d ever tasted. I later came across a scientific explanation for my bliss. When fruits are forced to fight off antagonists such as disease, fungi, pests and harsh weather, the tree fortifies them with additional antioxidants to help them in the battle; these natural defenses include the polyphenols, flavonoids and anthocyanins that enhance a fruit’s flavor.

Even so, a few years ago, Peter and I once again debated cutting down the tree. Delectable as they were, the annual harvest of 8 to 10 gnarled pears seemed too paltry to justify the eyesore of that skinny, crooked trunk and unruly branches.

But I couldn’t bring myself to greenlight the ax, so instead we lopped off the top half, and decided to let nature determine the pear tree’s fate.

She sided with the tree. This year, it put out a bumper crop: Dozens upon dozens of big, imperfect fruits, each as delicious as those heart-stoppers I tasted two decades ago.

As it happens, pears and the Hudson Valley had been linked in my mind long before I moved here. In 1992, when I was a novice writer at the brand-new Martha Stewart Living Magazine, I came here for a handful of photo shoots, including a truly wackadoodle Halloween story at Castle Rock, and a lovely story on pears.

Many of the things I learned while researching the pear story have stayed with me ever since. For example, I learned that the best way to check if a pear is ready to eat is to hold it lengthwise, pinched between stem-end and blossom-end, and squeeze very gently. It should give slightly. If you wait until a pear feels soft at its bulge, the core will be mush.

I also learned that the French and Italians ate upward of six times as many pears as Americans did. (Today, it’s Argentinians who put us to shame, eating 30 pounds of pears per capita annually compared to 2.8 pounds for the U.S.)

I also got to taste dozens of pear recipes created by our test kitchen, including the predecessor of the one I’ve adapted here, a favorite that quickly became a staple of my cocktail and dinner parties in the 1990s.

Oh, and one more thing: The location of those photo shoots made an impression on me. I thought: Yeah, Philipstown. Remember that place. You might want to go back there someday. 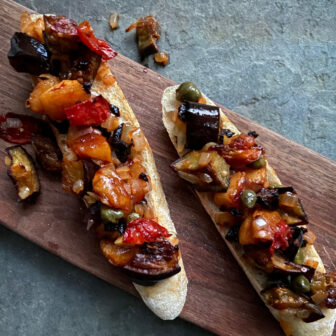 This appetizer also makes a great side dish for grilled tuna steaks, seafood or chicken. The word caponata comes from Sicily, where it refers to various dishes featuring chopped, fried eggplant in agrodolce, or sweet-sour sauce.

1. Drain the tomatoes, saving the juice. Chop coarsely and set aside.

2. Place a baking sheet in the oven and preheat to 425 degrees. Slice the eggplant into ¾-inch slices, sprinkle salt on both sides and place on a rack to drain for 20 minutes. Gently squeeze the slices after they’ve drained to wring out excess water, then cut into ¾-inch chunks. Place in a bowl and toss with ¼ cup olive oil and 1 teaspoon sugar.

4. Meanwhile, heat 1 tablespoon olive oil in a large skillet over medium-low heat. Add the chopped onion and garlic, and cook until soft and golden, about 10 minutes. Stir in the chopped tomatoes, ½ cup of the reserved tomato juice and capers, and continue to cook about 10 minutes more, adding additional tomato juice or water to keep the pan from drying out.

5. Add the roasted eggplant and pears to the skillet, along with the currants and vinegar. Toss everything together. Cook 5 to 7 minutes longer to let the flavors unite, seasoning with salt, pepper and additional vinegar or sugar as needed. Serve warm or at room temperature, on slices of toasted baguette.