Governor signs round of bills passed by state legislators

Through this week, Govs. Andrew Cuomo and Kathy Hochul had signed 546 bills passed during the 2021-22 legislative session, which began in January. Another 60 await Hochul’s signature. Fourteen have been vetoed.

On Oct. 22, Hochul enacted legislation that allows candidates to use nicknames on their nominating petitions or for the ballot. The bill was prompted by the removal of the names of two Muslim women, Mary Jobaida and Moumita Ahmed, from a ballot in Queens because the names on their petitions did not match their voter registrations. The bill’s sponsors noted that “many people with ethnically traditional names unfamiliar to the general population adopt an alternate or Anglicized name” because it is easier to remember or pronounce. “Candidates should be able to run for office using the nickname they are commonly known by in their communities, as long as they do not intend to mislead or confuse voters. This legislation helps candidates of color and immigrant candidates have equal access to the ballot as men with nicknames like Marty, Tony or Bill.”

On Oct. 9, Hochul enacted legislation that makes it illegal to attempt to extort or coerce someone by threatening to report their immigration status. These types of threats were already illegal when related to labor or sex trafficking.

On Oct. 7, Hochul signed a series of bills related to the opioid abuse epidemic. The first prohibits police or prosecutors from citing the possession of opioid antagonists — drugs such as naloxone (Narcan) and naltrexone that block opioids by attaching to opioid receptors without activating them — to justify an arrest or as evidence of illegal drug use.

A second law requires the state correctional agency to create a medication-assisted treatment program for inmates at its prisons and local jails.

A third law expands the number of felonies (e.g., auto stripping, identity theft) committed by a person with a substance-use disorder that may qualify him or her for diversion to treatment.

On Oct. 22, Hochul enacted a series of laws that affect former inmates. The first allows a person who has been convicted of a felony and completed his or her sentence to be named the executor of a family estate, although a court can restrict the person’s powers if he or she has a conviction for fraud or embezzlement.

A second law allows former inmates to perform overtime or shifts during curfew without violating their parole or supervised release.

A third law speeds up the process of obtaining a certificate from the state that certifies a former inmate has not committed any crimes since being released and reestablishes the right to vote. Under the old law, the wait could be three to five years.

On Oct. 21, Hochul enacted a law that requires private companies that do not provide retirement plans to automatically enroll their employees in the state’s Secure Choice Savings Plan, which is a payroll-deduction IRA. Once enrolled, employees can opt out.

On Oct. 20, Hochul signed legislation that expands the definition of the crime of coercion to include the production or distribution of nude photos. “Many of the victims of ‘sextortion’ — disproportionately young women — are targeted online and coerced into creating and sending sexual images, which can be the start of a long, harmful cycle of abuse,” said Jennifer Becker, an attorney for Legal Momentum.

On Oct. 30, Hochul signed legislation introduced by Galef in the Assembly that expands the Paid Family Leave Act to include care for biological siblings, adopted siblings, step-siblings and half-siblings. It takes effect on Jan. 1, 2023.

On Oct. 23, Hochul enacted a law that allows a majority of employees facing layoffs to petition their employer to create a shared work program in which the employer reduces everyone’s hours but no one is dismissed. The state then provides unemployment assistance to cover the lost wages.

On Oct. 28, Hochul signed legislation related to guns. The first law bans the possession by anyone other than a licensed gunsmith or dealer of “unfinished receivers,” which can be combined with other pieces to make a semi-automatic weapon. “For too long, the unfinished receiver loophole let anyone get their hands on all the parts needed to build an untraceable, unregistered AR-15 without ever going through a background check,” said Sen. Anna Kaplan, who introduced the legislation. 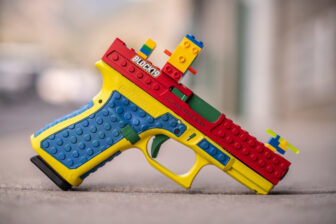 New York has banned altering firearms to resemble toys, such as this handgun cover sold by a Utah company for Glocks. (Culper Precision)

The second law bans the manufacture and sale of firearms modified to look like toys. In March, deputies in North Carolina seized a Glock with a 50-round magazine that resembled a Nerf gun, and in July, a company in Utah introduced a kit to encase a Glock in Legos.

The third law prohibits the sale of “ghost guns,” which are unregistered and do not have serial numbers, making them difficult for law enforcement to trace.

On Oct. 22, Hochul signed a law that allows tenants to sue in small-claims court for the return of their security deposits or other claims near where their rental unit is located. Under the old law, a tenant was required to file in the jurisdiction where the landlord’s business is located. The bill stems from a lawsuit in which a tenant in Binghamton wanted to sue to recover a $450 deposit but her landlords lived in California.

On Oct. 28, Hochul enacted a law that expands protections for whistleblowers in the private sector. The bill’s sponsors say that the former law said “that an employee is only protected if they disclose to a supervisor or public body an unlawful activity, policy or practice of the employer that creates and presents a substantial danger to the public health or safety, or that which constitutes health care fraud.” The new law adds protection for former employees; expands the definition of “retaliation”; extends the statute of limitations to two years; and states that employees need only prove that they reasonably believe there was a violation of the law or a danger, rather than provide evidence one occurred.

On Oct. 30, Hochul enacted laws related to animal welfare. The first prohibits pet insurers from basing policies or premiums solely on the breed of dog.

On Nov. 2, Hochul banned fire districts, volunteer fire departments, police departments and school districts “from selling or displaying symbols of hate.” The bill was introduced after incidents on Long Island in 2020 in which a Confederate battle flag was displayed on a firetruck during a parade and in the window of a fire department. A state law enacted last year bans symbols of hate, including Confederate flags and swastikas, on state property.

On Nov. 2, Hochul signed legislation that allows individuals who were younger than 19 when convicted of a crime but did not receive “youthful offender” status to reapply. The designation allows the conviction to be replaced by a confidential, non-criminal adjudication and comes with a reduced sentence. To be considered, a person must not have been convicted of a crime for at least five years since his or her sentencing.