After colliding with a coal barge during a gale on the Hudson, the Ebenezer Pennock listed forward and sent several hundred barrels from its deck into the river. The crew abandoned ship and the vessel drifted to the shore at Garrison’s Landing, where it was secured with a line by Charles Bross. The next morning Bross went to Cold Spring to consult a lawyer about whether the cargo — including 2,000 bushels of potatoes — qualified as jetsam or flotsam and could be claimed. According to The Cold Spring Recorder, he was advised that wrecks belonged to the sheriff or coroner. The latter, S.B. Truesdell, proceeded to Garrison’s. A Wall Street firm that had insured the cargo sent an agent who paid Bross $25 for securing the ship and also heard an offer of 5 cents per bushel from Hiram Vantassell and John Vanvoorhis for the potatoes, which were in the forward part of the boat and mostly under water. No deal was reached, but over the next two nights, about 185 bushels disappeared. With ebb tide, the boat was floated to Cold Spring where the insurers began sorting the spuds for auction.

During the same gale, 5,000 joists blew off the deck of the B.W. Bender and floated to shore. All but 2,000 quickly disappeared, presumably for firewood.

After three weeks of cold weather, George Ferris was able to harvest 8-inch-thick blocks of ice from his pond to store for the summer.

While the family of Seymour Worden, who lived 6 miles east of the village, was at church, a burglar stole about 40 pounds of butter and 20 cans of fruit from the cellar. The home of Moses Williams was searched and, while no contraband was found, the constable noted that each of the children wore India-rubber rings on their fingers of the type placed around the neck of cans of fruit.

On Dec. 21, it was minus 4 degrees at 8 a.m. and zero degrees at 8 p.m. The Hudson was frozen from Constitution Island north as far as could be seen.

A black Newfoundland owned by John Myers was sent “higher than a kite” by the Chicago Express train — a crowd rushed to the scene, thinking a man had been struck, only to find the dog, sitting with a bloody mouth and snout. Myers put the animal in a wheelbarrow to find the veterinarian.

Emerson Foster caught a wild goose that had eluded him for two weeks on Constitution Island. He thought he would have it tamed by summer.

It was reported that after a “zealous” Methodist prayer meeting at his home, tavern owner Henry Whaley posted a sign on Monday morning: “No more intoxicating liquors will be sold over this counter.”

Hundreds of boys were seen coasting on sleighs down the hill between Church and High streets that ended in the vacant lot behind the old Methodist Church.

A beveled wheel that conveyed power to the engine of the lathes and planes at the West Point Foundry broke, giving the workers an unexpected day off.

The editor of The Recorder, in the last issue of the year, gave thanks that “no fatal epidemic has marked the year, although the remitting fevers which have prevailed have been painful and expensive to many laboring men.” [There was no such thing as sick leave.]

Mrs. J. Harvey Briggs had a narrow escape while walking beside the railroad tracks when the 9:58 clipped her and threw her into the street. She suffered only minor injuries.

A Christmas tree provided for the Episcopal Sunday school was set up at Town Hall, where a crowd gathered to hear carols.

A fence was erected on the hill from the District 3 schoolhouse to the railroad tracks after goats nearly destroyed the trees.

The wife of one of two men who had been drinking at the Cold Spring House and other West End saloons appeared with a weapon to compel him to return home.

The Philipstown Lodge of Masons presented its retiring master, Andrew Mellravy, with an engraved gold watch.

The Rev. Alexander Barron of Highland Falls gave a reading at the Men’s Club of the Presbyterian Church from the works of recent Scottish writers, including Ian Maclaren and J.M. Barrie.

Mr. Osborn paid to have a sidewalk laid in front the Reading Room at Depot Square in Garrison.

The Recorder offered this advice on licking postage stamps: “Aside from the disease germ theory of abstaining from this practice, it certainly is not a cleanly habit, nor is it a necessary solution. It is a good deal easier and much safer to lick the envelope or, what is better, moisten the corner of it with the finger tips and water, and then apply the stamp.”

The Board of Visitors at West Point recommended that 88 more cadets be admitted, although The Recorder noted that “the country is not suffering for West Point graduates. It has rather more now than it knows what to do with.”

The Recorder noted that “scientific people” were proposing that the calendar be changed in January 1900 to a 13-month year with 28-day months.

The Cold Spring Hose Co. No. 1, nearing the end of its first year in operation, voted to purchase 200 more feet of hose.

The Putnam County Board of Supervisors paid its annual visit to the poorhouse for a dinner served by the keeper and his wife.

The Cold Spring Village Board granted William H. Ladue a franchise to build, within one year, an electric light plant.

The Recorder reported that “nose parties” was a fad with young people. The girls put their noses through slits in a curtain and the boys selected.

Henry Haldane Hustis, a native of the North Highlands who was the oldest lawyer in Fishkill, died at age 68.

Amos Mosher, 45, who was employed by Perry & Reilley, the grocers, was walking home for lunch when he came to the railroad crossing on Main Street. The gates were down but he began to cross despite a warning from Frank Early, the gate tender. Mosher paused and looked down the track, then kept going, but on his last step the engine caught and dragged him 60 feet. He was taken to the station but died 20 minutes later.

The Haldane debating club addressed the question: “Resolved: That every foreign immigrant should pay to the United States $100 and each should be able to read and write” and announced the topic for January: “That solitary confinement is an effective punishment.” 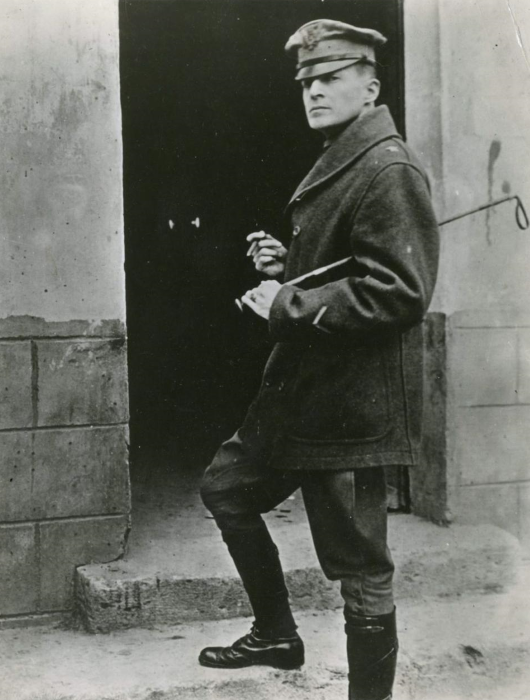 Douglas MacArthur at West Point in 1919

Brigadier Gen. Douglas MacArthur, superintendent of West Point, asked for an increase of the cadet corps from 1,334 to 2,500 men.

The Cold Spring Village Board voted to authorize the chairman of the sewer committee to cover the manholes with wire mesh to keep sticks out.

Mr. and Mrs. Howard Robinson purchased the Helen Wilson property that adjoined the Highlands Country Club and was once the home of the writer Alice Duer Miller. [She was best known for her feminist poetry.]

A Philipstown chapter of the Eastern Star was organized. About 200 people attended the initiation ceremony, including delegations from Poughkeepsie, Beacon, Peekskill, Croton and Ossining.

Oscar Blom of Nelsonville offered Christmas trees for 25 or 35 cents each.

The Loretto Council of the Knights of Columbus announced a January euchre tournament pitting its married members against the single ones.

Fifteen patients were convalescing at Loretto Rest on Chestnut Street. The front porch had been enclosed in glass and a steam heater installed.

The Bear Mountain Commission agreed to run a ferry between its dock and Manitou.

A 38-year-old Beacon man was killed on Route 9D just north of Cold Spring when his 1941 sedan, speeding south at 70 mph to 80 mph, rolled several times, catapulting him 125 feet. He was survived by his wife and 13-year-old son.

Two cars going in opposite directions sideswiped on a curve on Route 9D south of Garrison, injuring three young people.

The Garrison Depot Theater presented three one-act plays: Lady Gregory’s The Rising of the Moon; Noel Coward’s Come into the Garden, Maud; and Chekhov’s The Boor.

Howard Zeliph of Main Street in Nelsonville celebrated his 95th birthday on Christmas Day. Born in Philipstown in 1876, he was a retired mail carrier, having served 41 years using a horse and wagon and then a Model T Ford. He had 22 great-grandchildren and four great-great-grandchildren.

Because of flood damage caused by Storm Doria, the Nelsonville Village Board applied for assistance under the Federal Disaster Act.

Lone Star Properties of Greenwich, Connecticut, presented the Nelsonville Village Board with a deed to 4 acres of land on Secor Street for a proposed park.

It was announced that because of redistricting, the 94th Assembly district would change on Jan. 1, 1973. It would include Putnam County; Pawling and Dover in Dutchess; and Peekskill and Cortlandt in Westchester. It no longer would include Beacon. Putnam also moved from a state Senate district represented by a Peekskill Republican to one represented by a Poughkeepsie Republican.

A 59-year-old Cold Spring man was killed and three members of his family injured in a five-car collision on the Route 100 overpass in Briarcliff Manor.

John Nash Jr., of Walden, the son of Mr. and Mrs. John Nash of East Mountain Road South, won a color TV in a raffle organized by the Philipstown Civic Association.

The wooden bridge on Snake Hill Road reopened after being closed for 10 months following heavy rains in January. At $800,000, it was the most expensive bridge ever built by the Putnam County Highway Department.

The Philipstown Town Board considered tightening regulations on dog ownership. After Councilman Anthony Merante complained that he had been knocked off his bike twice by dogs chasing him, Supervisor Bill Mazzuca quipped that in “Continental Village, dogs only chase Democrats.”

The Environmental Protection Agency said that the owners of the Marathon Battery site had completed their $90 million cleanup of Foundry Cove, into which the company had dumped nickel, cadmium and cobalt over 30 years until 1982. Scenic Hudson agreed to purchase and preserve the 85-acre property, which would continue to be monitored by the EPA until 2026. 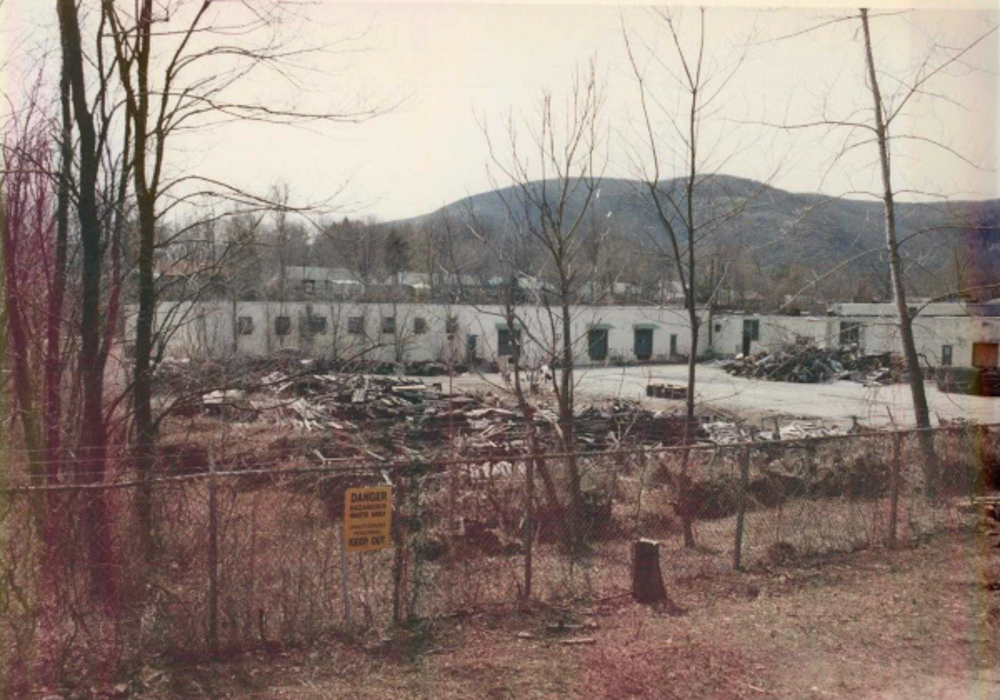 During a Philipstown Town Board meeting, Town Attorney Ed Doyle said that if a road has been used for more than 10 years by the general public, it becomes a town road. He also noted that while some deeds show private property extending to the center of the road, “it doesn’t matter because the town has user-rights to the road.”

A federal jury ruled for the defendants — Cold Spring, Putnam County and the Sheriff’s Department — in a $1.5 million lawsuit filed by a driver who had been arrested for allegedly driving while intoxicated.

The North Highlands fire department agreed to allow the Philipstown Little League to build baseball fields and a 60-car parking lot on land adjacent to its firehouse.

Kindergarten students from Haldane Elementary made their annual trek to Linda LeMon’s home to see her collection of more than 100 nutcrackers.