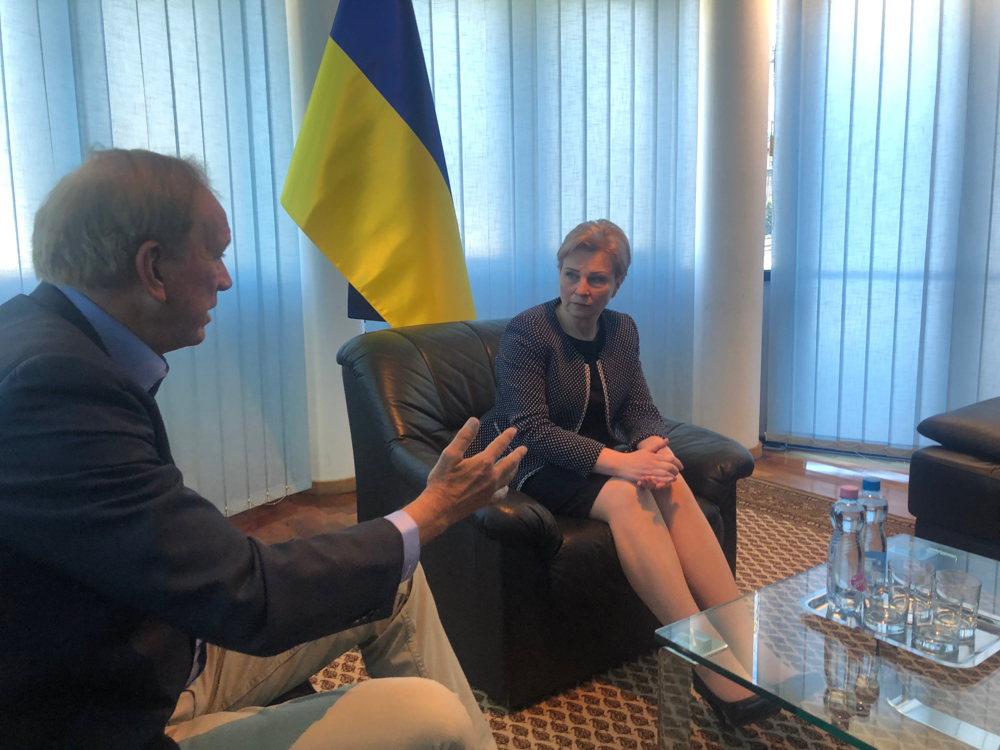 During the trip, Pataki met in Budapest with the Ukrainian ambassador to Hungary. (Photos provided)

Former Gov. George Pataki remembers one conversation in particular from his trip to Hungary and Ukraine last week.

At one of the borders where Ukrainian refugees have been crossing into Hungary to escape Russia’s invasion of their country, a young woman said she had driven seven hours alone in search of medicine for her two children. After finding the medicine, said Pataki, she would return to Ukraine.

“That type of thing just breaks your heart,” he said.

Pataki, who lives in Garrison, and his son, Owen, landed in Hungary on March 10, traveling with delegations from the Governor George E. Pataki Leadership and Learning Center and the Appeal of Conscience Foundation, an interfaith organization.

Of the more than 3 million people who have escaped Ukraine for neighboring countries since Russia launched its invasion of the country on Feb. 24, an estimated 272,000 have sought safety in Hungary, the U.N. Refugee Agency said on Tuesday (March 15). 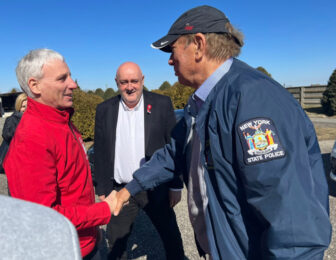 Pataki speaking with aid workers at the Hungarian border.

Pataki, a Republican who served as governor from 1995 to 2006, said he felt compelled to find ways to help out while “watching on TV the horror unfold.”

“The refugee crisis is just getting worse, and the United States has to do far more,” he said on Tuesday, a day after returning to the U.S. “The big thing is to get the goods that they need into Ukraine.”

Ukraine: How to Help

The Governor George E. Pataki Leadership and Learning Center is collecting funds to support a Ukrainian refugee camp in Kisvárda, Hungary. See georgepatakicenter.com/ukraine. Here are other ways to help:

The trip included meetings with officials from Hungary; conversations with aid groups providing food, medicine and transportation at the borders in Hungary, and a visit to a health care facility, said Pataki. The group helped sort out the logistics for the arrival of three cargo planes of medical supplies being sent by the Greater New York Hospital Association, and the distribution of the supplies in Ukraine, he said.

One March 11, he entered the war-torn country. One of the places Pataki said he visited was a Catholic school now being used to shelter women and children. While millions have left, millions more in the country of 41 million are unable or refuse to leave, he said. 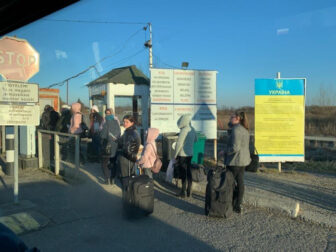 One refugee he talked with fled while her husband, a doctor, stayed behind to treat people in Mariupol, a city in southeast Ukraine under siege from Russian troops and heavy bombing. News organizations reported on Wednesday that Russia had bombed a theater where an estimated 1,000 Ukrainians were sheltering.

Another woman left behind her husband, a government official, said Pataki. “She doesn’t know where he is in Ukraine, but he’s doing his service as a volunteer soldier,” he said.

Pataki returned to Philipstown convinced that while “no one wants war with Russia,” the U.S. should be taking stronger steps to protect the airspace over Ukraine from Russian bombings and drone attacks. That includes equipping Ukrainians with fighter planes, he said.

There is also a great need for food, said Pataki, a need that could be helped if the U.S. sent a shipment of the meals-ready-to-eat used by its military.

“It’s heartbreaking to not be able to tell them [Ukrainians] why we’re not doing this,” he said.