School buses drive all over Beacon — up and down the side streets, Verplanck, Route 9D — for many blocks. But not all children from Beacon can be on the buses. If students live within a measured radius from school, they must walk or be driven.

Two of my children are walkers (to South Avenue Elementary and Rombout Middle School). The other child qualifies for busing because the school (Glenham Elementary) is outside the radius for our address. My walkers are old enough to walk by themselves. I’ve been training them to be careful crossing the road (and myself not to hyperventilate, because every Beaconite knows about the crosswalk problem, with most cars not stopping).

My middle-school daughter happily walks to school. In the spring and fall, she rides her bike. Glorious and free, she meets up with friends, and they fly like birds. This winter, she experienced walking in the ice, slush and rain, and was not having it.

Old-school Beaconites are like: “Yeah, so did I! You’re close enough to walk!” But her friends have hills to climb. She did not think it fair for them to have to walk. I can’t drive her, and a neighbor offers to drive her, but the fact remains: The option to hop on the bus as it drives by them is not there for many kids. Bus stops are all over Beacon and Glenham, but school buses don’t do house deliveries, they drop students at appointed intersections.

My daughter told her principal that she wanted busing for all. He gave her an answer that might have amounted to a shoulder-shrug emoji. I knew this was a larger decision than the principal’s, and that she needed to “go to the board” — the Beacon City School District Board of Education. They have a public comment part of every meeting, during which anyone can speak on any school-related topic, in a polite manner. 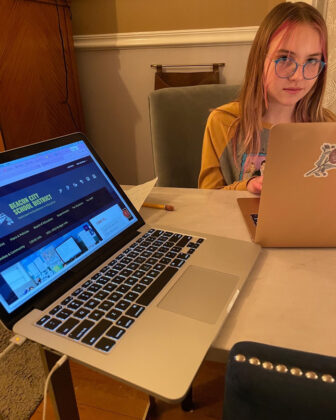 Ruby Martin, 11, gets ready to make her points during a virtual school board meeting. (Photo by K. Martin)

Without blinking, she asked me when the next meeting was. Thanks to the pandemic, the meetings are streamed on Zoom and YouTube. She could call in remotely, raise her hand and deliver her talking points. She wanted to improvise, but I strong-armed her into writing down bullet points. “You don’t want to forget your most important point — it’s easy to do in the moment,” I said.

On Feb. 7, she logged on, was called on by President Meredith Hauer (huzzah!) and calmly spoke her piece. She mentioned the single mother who walks her daughter with special needs to Rombout up and down the hills in any weather, while her son needs to get himself to the Beacon High School. She spoke of her sixth-grade friend who slipped several times on the ice. She spoke of me, who can’t drive her to school on the super-cold days because I have younger kids sleeping at home and can’t leave the house.

She was so good. So brave! The superintendent, Matt Landahl, thanked her for speaking, and said it was good timing, as February and March is budget time, when they debate spending ideas. Busing for all involves more money, coordination and responsibility. He said that the principal at Rombout had been asking for busing for all. (Huzzah!) After years and years of restrictive busing, maybe this is the year for change?

A week later, my daughter came to me, pouting. “They didn’t change it! Nothing happened! We still can’t ride the bus!” I knew that a change like this takes a long time and requires a big push from the community. It can start with one person voicing a wish, but it needs momentum.

Advocating something — anything — takes a while. It takes consistency and dedication. And it can be scary if you are advocating a cause for your child, or for yourself. My pre-K child is advocating to be able to walk around the room at “rug time,” when everyone else is sitting. But he is afraid to tell his teacher.

I had already told her via the teacher app ClassDojo and she was amendable. But he felt like he also wanted to tell her. I told him: “Tell her: ‘I need to get my wiggles out!’ That’s what one of Beacon’s most famous kindergarten teachers, Mrs. Fabia, tells her kids!” He responded: “I’m scared, mommy.” Advocating in a small community is intimidating because we all know each other and have to spend time with each other in different spaces.

Here are some tips for advocating what you think is right:

The theme song for writing this column was “Chasing Pavements,” by Adele. It’s a long road to crack the code of change. You might want to give up. Should you keep chasing pavements? Actually, sometimes, you’re breaking the pavements.

You’re breaking the pavements to make them new. You’re not wrong. But that’s why it’s so hard. Keep going.