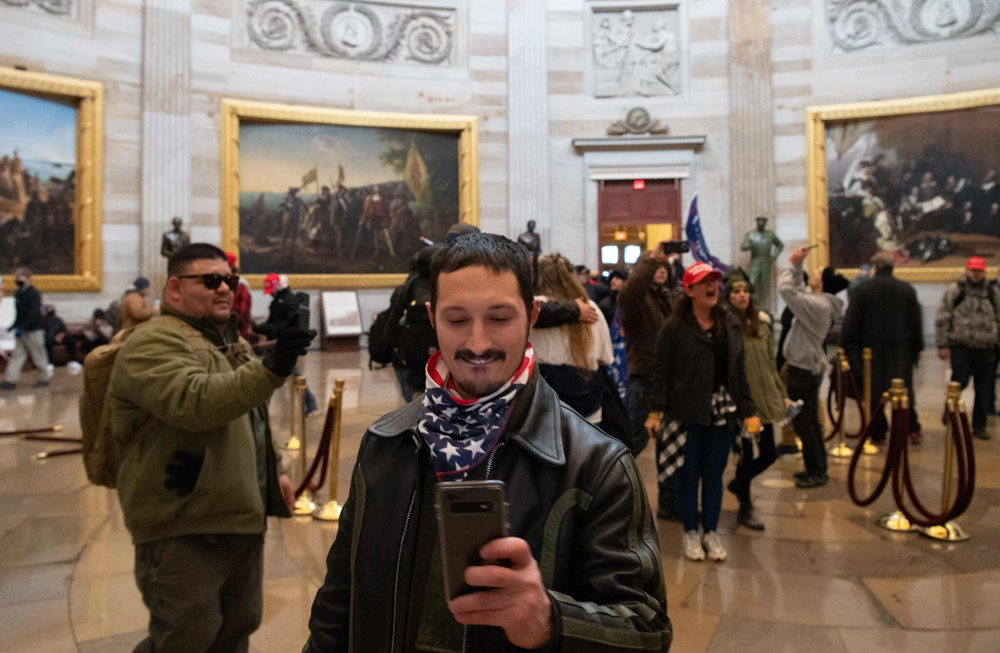 Will Pepe of Beacon appears inside the Capitol on Jan. 6, 2021, in a news photo submitted as part of the FBI's charging documents. 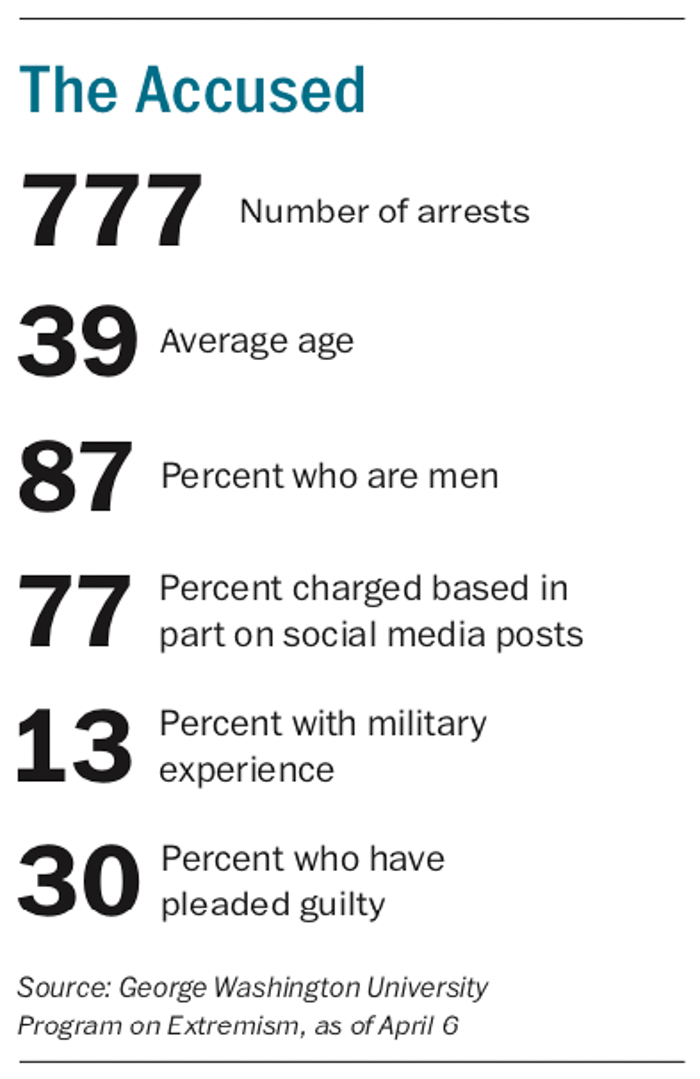 Fifteen months after the attack on the Capitol to disrupt the vote count that certified Joe Biden as president, 777 people face charges that range from trespassing to violent attacks on police officers. In court documents, the federal prosecutors refer to the case as the “Capitol Hill Siege.”

By one estimate, about 140 police officers were injured during the riot. One protester was shot and killed by a Capitol police officer and the assault is believed to have contributed to the deaths of at least three officers.

Five men from Putnam County, two from southern Dutchess and two with ties to Newburgh have been charged. Here is the status of their cases.

• Arrested March 15, 2021
• Pleaded guilty Oct. 28
Ballesteros, 28, posted a video on Instagram of himself inside the Capitol wearing a black mask. When asked online by another Instagram user if he had been inside, Ballesteros said he had “made my stand” and that “some kid told me he tipped off the [FBI] hotline.” He pleaded guilty to “parading, demonstrating or picketing” inside the Capitol, a misdemeanor that has a maximum sentence of six months in prison and a $5,000 fine. He is scheduled to be sentenced on April 16; the defense has asked for 24 months of probation, 60 hours of community service and a $500 fine. 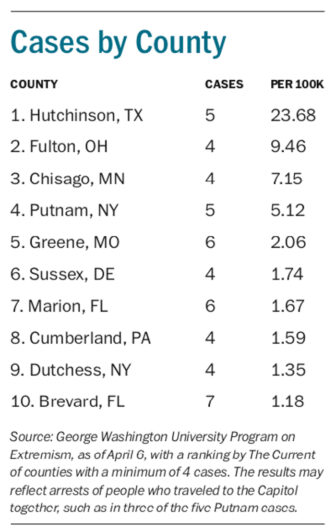 • Arrested April 21
• Pleaded guilty Dec. 16
Chapman, 51, drew the FBI’s attention after a person with whom he interacted through an online dating service alerted agents to a remark and photo posted by someone with that name. In the message, “Robert” wrote that “I did storm the Capitol. I made it all the way into Statuary Hall.” His potential date replied: “We are not a match.” He conceded: “I suppose not.” Like Ballesteros, he pleaded guilty to parading, demonstrating or picketing. His sentencing is scheduled for May 18.

• Arrested Jan. 16, 2021
• Remains incarcerated
The FBI said Lang, 26, can be seen in the crowd wearing a green-and-black gas mask and striking officers’ shields with a bat. On Jan. 7, the day after the riot, Lang posted to Twitter, according to the charging documents: “I watched a woman die yesterday in front of my eyes. I saved two others from being trampled and suffocated by Capitol Police. They murdered her and tried to murder many, many more. This is an act of war by TYRANTS against the American people.” At a hearing in December, a prosecutor said Lang had turned down a plea deal with a sentence of up to 6½ years. Prosecutors have proposed a trial date in October. On April 5, Lang’s defense filed a motion to dismiss one of the counts, obstruction of an official proceeding, arguing that the law applies only to a proceeding before a tribunal. Further, they argued, “his presence near the Capitol did not directly go after the vote counting.”

• Arrested March 8, 2021
• Released on personal recognizance
An FBI agent testified that Minuta, 37, was at the Capitol “equipped with military-style attire and gear,” including ballistic goggles, a radio earpiece and radio, hard-knuckle tactical gloves, bear spray and apparel emblazoned with a crest related to the Oath Keepers militia. He “aggressively berated and taunted” police officers before entering the building, the agent said. Minuta, who owns a tattoo parlor in Newburgh but lives in Texas, was indicted with 17 other alleged members of the Oath Keepers. He was indicted on Jan. 12 on five counts: seditious conspiracy; conspiracy to obstruct an official proceeding; obstruction of an official proceeding; conspiracy to prevent an officer from discharging any duties; and tampering with documents or proceedings. Minuta pleaded not guilty on Jan. 25 and a trial is scheduled for July 11.

Will Pepe, Beacon
• Arrested Jan. 12, 2021
• Released on personal recognizance
Prosecutors allege Pepe, Dominic Pezzola of Rochester and Matthew Greene of Syracuse acted together as members of the far-right Proud Boys by coordinating travel and lodging, using earpieces and radios to communicate, dismantling barriers and breaking windows. All three pleaded not guilty. Following his arrest, Pepe was fired from his job at Metro-North in Brewster. He was indicted on four counts: conspiracy; assaulting, resisting or impeding certain officers; entering a restricted building or grounds; and aiding and abetting. The next status conference is scheduled for May 4. 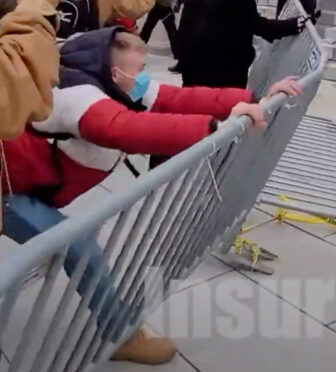 An image from a video taken on Jan. 6 at the Capitol shows a man identified as Gregory R. Purdy Jr. of Carmel pushing on a barricade erected by police.

Gregory Purdy Jr., Kent
• Arrested Nov. 10
• Released on personal recognizance
A 2016 Carmel High School graduate, the 24-year-old was one of six candidates in May 2020 for two seats on the Carmel school board (he finished fifth) and in 2016 managed a campaign by his father, Gregory Purdy-Schwartz, a Republican who hoped to unseat longtime state Assembly Member Sandy Galef, a Democrat whose district includes Philipstown and Kent. Purdy Jr. was indicted on Jan. 14 on nine charges that included assaulting, resisting or impeding police officers and illegal entry. Purdy’s uncle, Robert Turner, 39, of Poughkeepsie, who traveled with him and faces the same charges, was arrested Nov. 22. Both have pleaded not guilty. A status conference is scheduled for April 29.

Matthew Purdy, Kent
• Arrested Nov. 10
• Released on personal recognizance
Gregory Purdy’s younger brother, 22 and also a Carmel High School grad, was indicted on Jan. 14 on four counts, including disorderly conduct and illegal entry. He has pleaded not guilty; a status conference is scheduled for April 29.

William Vogel, Pawling
• Arrested Jan. 26, 2021
• Released on personal recognizance
The FBI says Vogel, 27, recorded himself inside the Capitol and posted the video to Snapchat. He pleaded not guilty to unlawful entry, disorderly conduct and violent entry. The government has made a plea offer; his next hearing is May 25.

Anthony Vuksanaj, Mahopac
• Arrested Jan. 26, 2021
• Released on personal recognizance
Vuksanaj, 52, pleaded not guilty to charges of trespassing, disorderly conduct and parading, demonstrating or picketing. An FBI agent said that police had detained Vuksanaj on June 6, 2020, in connection with a robbery at knifepoint. He denied being involved but a search warrant revealed that his phone had been at the Capitol on Jan. 6, the FBI said. On Jan. 20, Vuksanaj pleaded guilty to a single count (parading, demonstrating or picketing) as part of a plea agreement.