Two of Beacon’s four wards would switch districts under a draft map approved by a seven-member commission redrawing boundaries for the Dutchess County Legislature based on 2020 census figures.

The county’s Independent Reapportionment Commission approved its first reconfiguration of Legislature boundaries on April 26, and will introduce the plan on Monday (May 9) at the first in a series of public hearings. The commission must adopt final boundaries for the county’s 25 districts — currently represented by 17 Republicans and eight Democrats — by June 25.

In the draft map, Beacon remains split into two districts, 16 and 18, that are shared with different parts of the Town of Fishkill. But the map reshapes the districts’ boundaries and changes the wards that each encompasses.

District 16, represented by Yvette Valdes Smith, a Democrat elected in November, currently includes Ward 4 and one of the three election districts from Ward 3. Although the map released by the commission does not include election district boundaries, it shows the district taking in Beacon’s eastern neighborhoods and parts of the city’s north and southeast, an area predominantly within Ward 3.

In addition to gaining all or most of Ward 4, District 18 would retain Wards 1 and 2. The area of the Town of Fishkill that lies along Route 9D between Beacon and Philipstown would fill out that district, which is represented by Nick Page, a Democrat first elected in 2018. 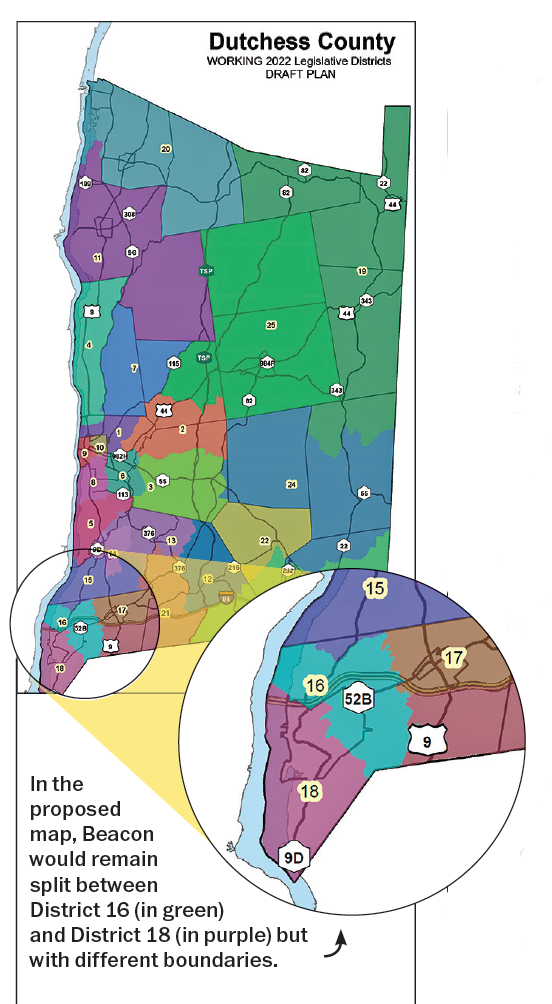 Before the commission approved its draft on April 26, one member, Patrick Blanchfield, suggested that Beacon could be placed into a single district. But Beacon’s population, which the Census Bureau counted as 13,792, exceeds the “ideal” population of 11,693 for each district, based on the county’s population of 292,325 and its 25 districts.

“From the perspective of ‘communities of interest,’ we would want to keep those people together, but we can’t; there’s just too many of them,” said Mona Kleinberg, a Beacon resident and member of the commission.

The final map will likely differ from the draft, in part because Beacon has to finalize new boundaries for its wards. By law, that process must be completed within six months of the release of new population counts from each decennial census. The city’s charter says the population of each ward cannot deviate more than 5 percent from the average for all wards.

The City Council held a public hearing Monday (May 2) on the proposed election district changes, which would move 268 residents from Wards 3 and 4 into Ward 1. Seventy-four residents would move from Ward 3 to Ward 4, while Ward 2 would not change.

The changes would be subject to a citywide referendum in the fall if at least 277 people, or 5 percent of the number of Beacon residents who voted in the last gubernatorial election, sign a petition within 45 days of passage by the City Council.

The Independent Reapportionment Commission was created in 2020 following a countywide referendum that was approved by 65 percent of voters. It was envisioned as a solution to partisan redistricting; it cannot, by law, draw maps to “discourage competition or for the purpose of favoring or disfavoring incumbents or other particular candidates or political parties.”

Their work has been delayed twice — by the later-than-normal release of the 2020 census data and the disbanding of the original commission last summer after a Democrat appointee was found to be a school board member, violating a prohibition on elected officials.

The reconstituted commission held its first meeting on Feb. 25 and has been meeting twice, and sometimes three times a week, and on consecutive days, to meet its legal deadline.

Joshua Simons, a senior research associate at The Benjamin Center for Public Policy Initiatives at SUNY New Paltz, and a consultant for the commission, reminded them on April 14 that they should refrain from discussing “incumbents, previous elections, or how a particular district has voted or will vote in the future as the law is written.”

Yet, that was exactly the context of an argument that began during the commission’s April 26 meeting, when Blanchfield and Rakow complained that the draft map puts all of Vassar College, currently split among three districts, in District 6, where Republican Tony D’Aquanni defeated Rebecca Edwards, the Democratic incumbent, in November.

Blanchfield, who claimed he does not “follow” which Legislature districts are Democratic or Republican, argued that the change amounted to “taking primarily Democrat voters” and “jamming” them into District 6. He also noted that Edwards and Means are Vassar professors.

“So, we have a Vassar professor on the commission who’s pushing to put Vassar College, a predominantly and overwhelmingly Democrat demographic” into a district held by a Republican, he said.

Means called the claims “baseless” and “unsubstantiated.” And Kleinberg said that the decision to consolidate Vassar into one district was driven by the requirement that the commission consider “communities of interest,” defined as “an area with recognized similarities of interest,” when redrawing districts.

“Our motivations initially were not partisan. Now, you are turning this into a decision that will be a partisan decision,” she said.

The Independent Reapportionment Commission has scheduled three public hearings on its draft map, including one at 7 p.m. on May 24 at the Fishkill campus of Dutchess Community College at 461 Route 9. Its map, and instructions to attend its hearing remotely, can be found at bit.ly/dclegislature-map.

The original version of this story identified Mona Kleinberg as co-chair of the commission. In fact, she is a member but not the co-chair.