Revenue for village, customers for Main Street, concerns for residents

The pros and cons of increased tourism took center stage at the June 15 workshop of the Cold Spring Village Board, as the mayor and trustees, business owners and residents weighed in on the likely return of Seastreak’s fall weekend cruises and the possible addition of midweek summer dockings.

Seastreak officials have proposed bringing cruises to the village on Saturdays and Sundays from Sept. 17 through Nov. 13. Mayor Kathleen Foley said the New Jersey company is also considering dockings on Wednesdays and/or Fridays from July 1 to Sept. 16.

The workshop, she said, was intended to discuss the need to preserve “critical village revenues” from docking fees balanced against concerns raised by residents.

Seastreak began its fall excursions to Cold Spring in 2012, with passengers boarding in New Jersey and at the foot of Wall Street in New York City. On some pre-COVID weekends, two boats docked on the same day, each with up to 500 passengers, creating crowded sidewalks and long lines at public restrooms.

“We’ve learned from the past,” said Trustee Eliza Starbuck. “We’ve tried to reduce the impact and negatives that residents were expressing.”

Even 600 to 800 passengers “inundated the village,” she said. “I always felt that was too much for businesses, too much for residents; it was very uncomfortable.”

Restaurants “did not have enough seats to feed those numbers at one time,” Foley said. “So, you ended up with a lot of angry folks.” 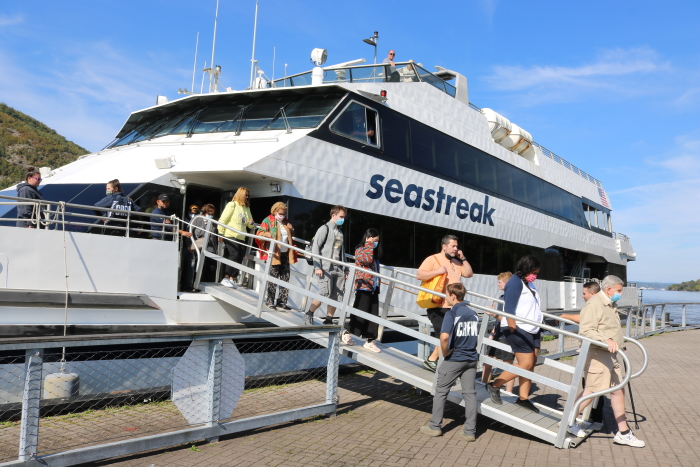 For its 2022 agreement with Seastreak, the village has proposed restrictions such as allowing only one boat to dock each day; limiting passengers to 400 on weekend cruises and 200 on weekdays; limiting weekend docking times; requiring boats to dock at West Point or other locations; limiting the time weekday boats spend at the dock; and ending the summer weekday schedule in August.

A number of people at the meeting, including board members, business owners and a Chamber of Commerce representative, agreed that the crowds were manageable when passenger counts were reduced to 400 during the pandemic.

While the cruises add to what are already busy tourist weekends, Seastreak has become a noteworthy source of revenue, adding $36,000 to village coffers last year. Starbuck estimated that could increase to $44,000 or $45,000 this year.

“That keeps our taxes relatively low; the fees offset village costs,” she said. Starbuck, who owns a wine store on Main Street, noted that passengers support local businesses “without contributing to parking shortages.”

Cold Spring charges $8 per linear foot for boats tying at the main dock. For prolonged dockage, the fee increases to $12.

Seastreak officials have asked that the village base its fees on ticket sales, but Starbuck said the village will stick to boat size. “They are taking the business risk, running a boat when they are not sure they can get enough customers,” Starbuck said. “That risk should not be ours.”

Foley noted that Seastreak revenues cannot be earmarked to support specific village projects. “They become part of the general fund, with the board deciding spending priorities,” she said. “It creates budget relief which allows us more flexibility.”

Nat Prentice, the president of the Cold Spring Chamber of Commerce, presented comments submitted to him by Main Street business owners who consider the return of Seastreak vital to their livelihood. More than one said that foot traffic has been slow this spring and that the economic outlook is not promising.

Residents of the lower village view the situation differently. “Here at ‘ground zero,’ a lot of us are at the end of our rope; there’s is so much traffic, so many people, so much noise,” said Derek Graham, who lives on West Street. “We can’t have a quiet picnic on weekends; there is just no quiet.”

Graham questioned the relative value of Seastreak revenue. “If we’re generating $40,000 in revenue [from Seastreak] and the budget is $2.5 million, it is less than 2 percent of revenue. That’s not worth it for what we have to put up with. The whole waterfront is ruined. It’s not just the boats; it’s everything.”

Gaston Alonso, also a resident of the lower village, said something was missing from the discussion. “This summer and fall are not like previous ones; Dockside Park is a construction mess, out of commission,” he said. “Residents and tourists who usually go there aren’t able to; lawns next to the bandstand are already overcrowded on weekends and that will get worse once school ends.”

Alonso cautioned the board not to assume residents of the lower village are not upset because only two of them spoke up at the meeting, compared to nine business owners.

“Please prioritize the needs of residents,” he said. “We should not have to bear the brunt of this, so others can benefit.”

Foley responded that issues in the lower village are being looked at from “all angles” and that the board has advocated impact mitigation at Dockside and regarding the proposed Fjord Trail.

“We recognize it is a neighborhood impacted by tourism, a unique neighborhood because it is on a public waterfront,” she said. “We cannot stop people from visiting, it belongs to everyone; it’s a matter of finding balance.”

Graham commented that taxes derived from an increase in village business from Seastreak cruises will simply “go to the slush fund in Putnam where the backroom good old boys decide” where the money will be spent.

Foley urged residents to pay attention to the Putnam County Legislature during the next two months as it enters the budget cycle. Legislators, she said, will have to consider the county executive’s proposal for tax sharing.

Putnam is one of a small number of counties in New York state that does not share revenue raised from retail sales tax with its municipalities.

During the discussion of Seastreak revenues, Starbuck described the village budget process as “torture” because there are so many projects the village is unable to fund. Foley added: “Revenue streams are limited, and we have to take advantage of those we have. What do we want to accomplish in terms of quality of life, and how do we get there?”

Answering her own question, she said the village has to either have adequate revenue sources or raise taxes. “It’s all about balance,” she said.

■ Jennifer Zwarich was appointed on June 15 as chair of the Ad Hoc Committee on Short Term Rentals. Zwarich also chairs the village Tree Advisory Board and is one of three members of the seven-member STR committee who does not operate a rental.
■ Veronika Bilinski was hired as seasonal parking enforcement officer. A graduate of the Putnam County sheriff’s cadet program, she will be paid $17 per hour.
■ The board gave its approval on June 15 to selling a piece of village-owned property at 14 and 16 Stone St. for $4.55 per square foot.
■ The Village Board will hold fewer meetings over the summer. Tentative dates are July 13 and 20 and Aug. 10 and 17.
■ The board on Wednesday (June 22) postponed action on a resolution that would permit only the U.S., New York State and POW/MIA flags to be displayed on village properties. Earlier in the year, it agreed to fly the Ukraine flag, which has since been removed, and it is flying the LGBTQ flag for the month of June. Foley said she would like to know more about how other municipalities handle the flag issue. “If we need to ask these questions to get to a level of satisfaction that we have turned every stone, we’re willing to do that,” she said, although she questioned the amount of time the board should spend on the issue. “It is about using our time wisely, not entangling local government in culture wars,” she said.
■ The board approved the purchase of a $205,000 dump truck that will be financed through M&T Bank at 4.03 percent over six years.
■ The board approved increases in the water and sewer usage rates to 15 cents and 12 cents per 1,000 gallons, respectively. Water rates have been unchanged since 2004 and sewer rates were last increased in 2008.
■ The contract between the village and the Cold Spring Police Benevolent Association will be amended to include Juneteenth as a paid holiday for police officers. Other village employees were granted the holiday this year.

5 thoughts on “Seastreak to Sail Again to Cold Spring”