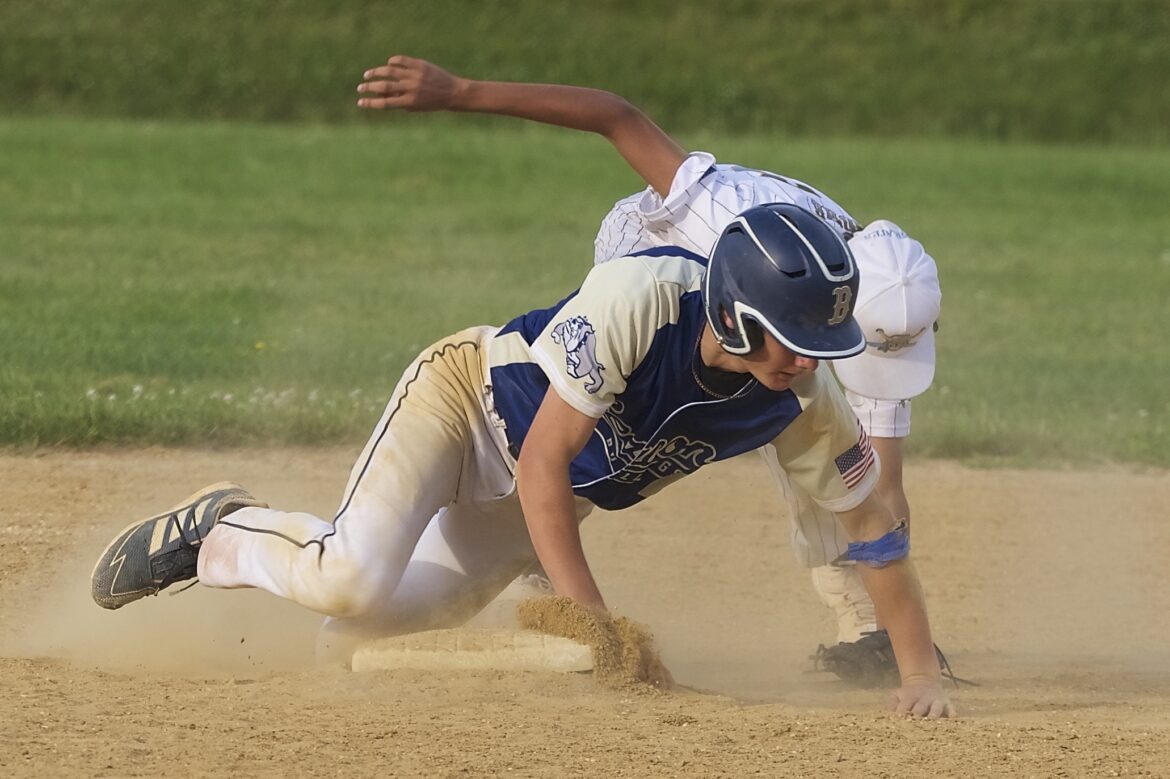 Beacon’s Liam Murphy slides in safely at second base Tuesday night at Beacon High School in a 10-0 Bulldogs win over the Valley Pirates. (Photos by S. Pearlman)

Varricchio tosses no-hitter for 12U

Beacon’s 15U baseball team continued its scorching play in the Greater Hudson Valley Baseball League’s summer season, sweeping a doubleheader from the visiting Fairfield County Captains on Saturday (June 25) and then dominating the Valley Pirates (of Shrub Oak), 10-0, on Tuesday (June 28) evening at Beacon High School.

“Our pitchers gave us a good performance, especially for guys who haven’t pitched a lot,” said Coach Bob Atwell, who was trying to keep his staff fresh for an upcoming weekend tournament. “They all had good stuff and it was a nice combined effort.”

Beacon’s offense was on full display. Derrick Heaton went 2-for-2 with a double and drove in two runs, Mercer Jordan had two RBI, Atwell went 2-for-4 with one RBI, Varricchio and Albra each drove in one run and Murphy went 2-for-3.

Murphy, batting .448 with a strong on-base percentage, has been “on fire” for the Bulldogs lately, said Atwell. Heaton has also been hitting well (.406 and 12 RBI), and is a “big force” in the middle of the team’s lineup, he said. 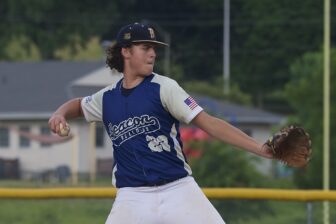 Mikey Fontaine, who leads the team with 16 RBI, and Jordan Mercer (.367) have also been having a nice summer at the plate, said Atwell.

The team has also been performing in the field. One of its mainstay strengths has been a solid defense, said Atwell.

“We’ve only made 13 errors in 11 games, and that’s pretty impressive,” he said. “The guys are making defensive plays, and we’ve had eight double plays. This is one of the stronger defensive teams I’ve had, and we’re doing it with guys playing multiple positions.”

In Beacon’s doubleheader sweep of the Fairfield County Captains, Anthony Borromeo picked up the win on the mound in Game One, a 9-4 victory, and Jordan got a save. Fontaine and Jordan each drove in two runs in the win.

Beacon picked up a 12-3 victory in Game Two behind the pitching of Heaton. Ronnie Anzovino earned the save while Antalek went 2-for-3 with three RBI.

With 10 wins in 11 tries, Atwell likes the direction his team — which won a summer title last summer, and lost in the championship game in the fall — is headed.

“They had a good year last year, and got to the championship game in the fall,” he said. “So, I felt like this team could do well. And the guys have a lot of confidence.”

The team was scheduled to play in the 10th annual Firecracker Tournament in Hershey, Pennsylvania, this weekend, and returns to face the Lagrange Lumberjacks on Wednesday at 5:45 p.m. at Lagrange Park.

Varricchio Hurls No-No For 12U

Naim Dika went 2-for-3 with a two-run double, Hudson Fontaine drove in a run, and Elijah Epps, AJ Hernandez and Jake DeLuise all had one RBI for Beacon.

“The guys played a good game, they were locked in from the start,” said coach Ryan Coval. “Nolan gave us a very good effort on the mound tonight; he had great stuff. Julian Rivers also made some awesome plays up the middle to preserve the no-hitter, and everyone contributed at the plate for us. Overall, it was a great team win.”

Beacon took a 12-3 decision from the Mahopac Indians on Wednesday (June 30) night in Beacon, with Epps and Fontaine pitching. Parker White and DeLuise each drove in two runs, and Dika and Connor Varricchio each had an RBI.

Offense was the name of the game Tuesday evening at Beacon’s Memorial Park, when the Bulldogs 9U team pushed 25 runs across the plate in a 25-14 win over the Black Dirt Barnstormers in GHVBL action.

Henry Alee went 2-for-4 and drove in four runs for the Bulldogs, and Evan Eraca and Max Digneo each went 3-for-4 with three RBI. AJ Rhodus had two RBI while going 2-for-3, and Grady Barton and Jack Giametta (3-for-5) each drove in a run.

“That was a very sloppy defensive game,” coach Jed Varricchio said. “Our hitting kept us in it, and we kept the pressure on them. Our pitchers struggled at times, but they made their pitches when they had to. Max is really developing into a shutdown closer. It was a sloppy game, but a win is a win.”

Beacon (4-1), which also beat Patterson, 12-2, the prior Saturday, was scheduled to host the Barnstormers on Thursday at 5:30 p.m. at Memorial Park.