Jessica Pisano, an associate professor at The New School for Social Research in New York City, will speak at 7 p.m. on Thursday (Sept. 15) at the Cold Spring Coffeehouse about her book, Staging Democracy: Political Performance in Ukraine, Russia and Beyond. 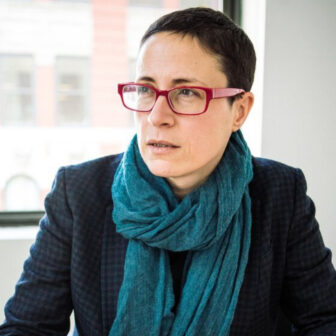 Could we have predicted the war and how it’s gone so far?

The full-scale invasion is the expansion of a war that Russia started in 2014 in the Donbas and with the annexation of Crimea. It’s been clear for a long time that Putin had ambitions beyond Russia’s borders. What I didn’t expect is the use of prohibited weapons and the focus on civilian targets such as thousands of schools. Americans should keep Ukraine on the radar. Americans are spending a lot of money to support Ukraine, with good reason: protecting global democracy and stability. Many countries rely on Ukrainian agriculture, and Russia’s war may mean more hunger, rising prices and political upheaval the longer it continues.

Should Americans be surprised by Ukrainian president Volodymyr Zelenskyy?

Many Ukrainians have known Zelenskyy longer than Russians have known Putin. In fact, many Russians, too, have known Zelenskyy longer than Putin. He was very popular in comedy competitions. Along the way, he was offered opportunities to advance, but he stayed with his team so it could advance, too. He ended his stage career with the same people he started with. Even there, he had a valiant loyalty which transcends the current movement. For people who followed him, Zelenskyy today is not a surprise: He was loyal to his teammates and is loyal to his country. There have been lots of attempts to discredit him, but he’s been a stable presence in Ukrainians’ lives through TV and the internet for more than 20 years.

What does political performance mean?

In this book, it refers to the staged performances of democratic institutions that the Kremlin uses to govern Russia and will try to use in temporarily occupied territories of Ukraine. The book goes backstage at these elections and demonstrations to show how they work at the local level. These practices are corrosive for democracy because people who participate come to imagine every election is rigged and staged.

You’ve designated the Karazin Foundation to receive a portion of the book’s proceeds. What does it provide?

The need is huge and everywhere, especially for the coming winter. But this organization is especially deserving because Kharkiv, where Karazin University is located, is only 18 miles from the border with Russia [about the distance between Beacon and Peekskill]. I serve on their board of trustees and chose it because I’ve known the people who run it for more than 20 years. The university sustained major infrastructural damage but it’s still operating, with 30,000 people part of its community. It needs help providing food and warm clothing to students who are now studying in basements. There are sirens and shelling every night where the university is located. In the future, it will need help rebuilding classrooms.

What could Americans learn from the people of Ukraine?

Ukraine wasn’t always so united: The country was highly polarized until recently. The Kremlin’s troll factories bear some responsibility for that: They would use social media to amplify disagreements among Ukrainians. Under Zelenskyy, Ukrainians have learned to tune out that noise. They’ve learned they can still work together for the good of their country even though they may deeply disagree about certain policies. Americans might take a page from this, at the moment.