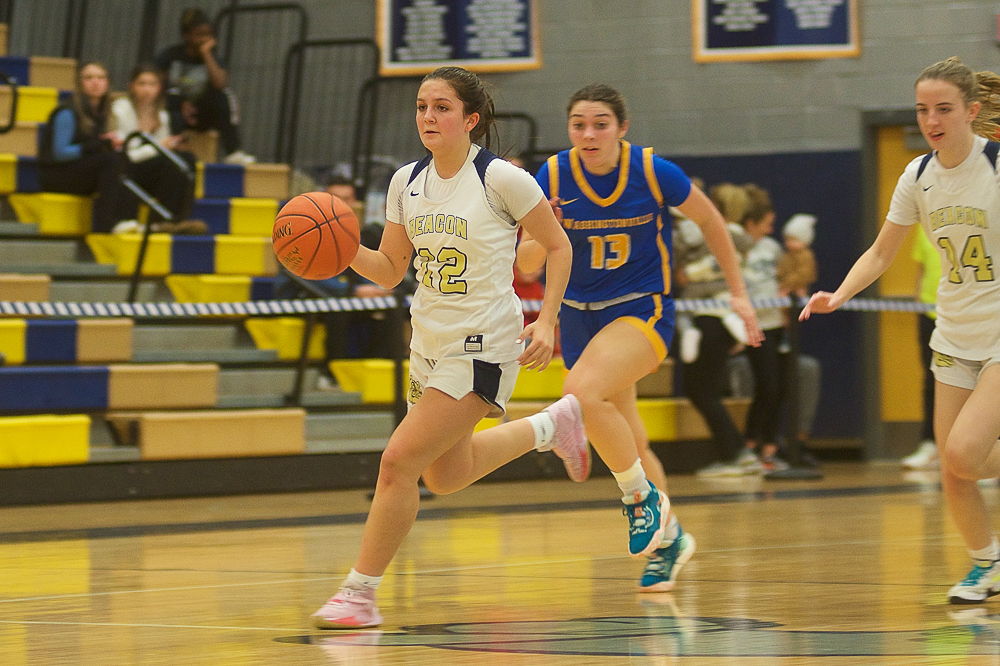 Beacon recorded wins over Minisink Valley and Washingtonville but on Tuesday (Jan. 10) fell at Chester, 44-39.

At home against Washingtonville on Monday, the Bulldogs won 44-25. Landisi scored 19 and Rodriguez added 11. 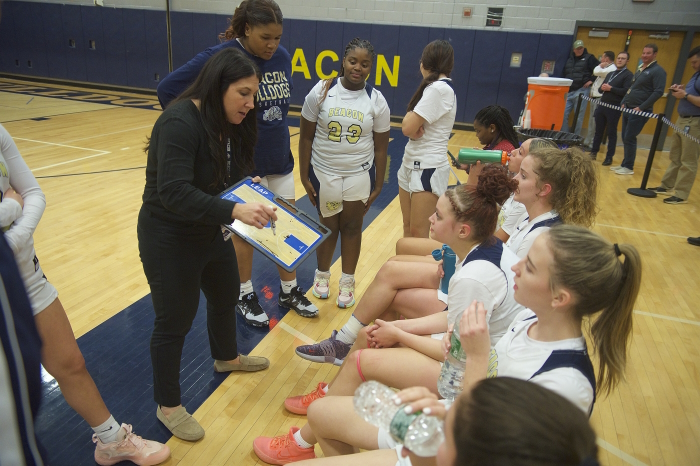 Coach Christina Dahl goes over strategy during a timeout. (Photo by S. Pearlman)

“We were getting good looks at the hoop, but our shots weren’t falling until the fourth quarter, when we had an 18-point run,” said Coach Christina Dahl. “Defensively, we did a great job, especially in the second half, when we only gave up 11 points.”

After building an early lead over visiting Croton on Tuesday (Jan. 10) at home, Haldane let the Tigers back in the game in the third quarter and did it again in the fourth. But the Blue Devils settled in down the stretch, carving out a 66-62 victory and sending a large crowd home happy.

Haldane flexed its muscles early, but Croton wouldn’t go away, closing the gap to six points with 5:12 left in the third before the Blue Devils went on a 12-0 run. In the end, Haldane had too much height, and too much talent. 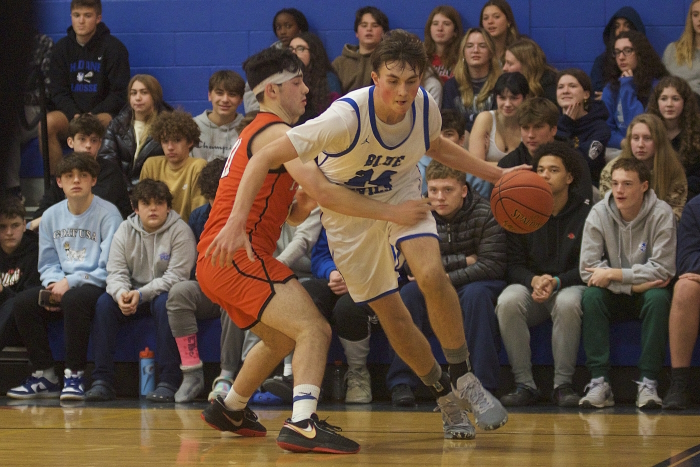 “Croton is well-coached, and they didn’t give up,” said Coach Joe Virgadamo. “We need to do a better job rebounding. We had a size advantage and we didn’t capitalize. But we did play well in transition.”

On Jan. 6, Haldane dropped a 48-40 decision to Pearl River. The Blue Devils led 24-19 at halftime, and the game was tied at 31 entering the fourth. Nachamkin led the Blue Devils with 19 points and Cervone added 15.

Beacon had an easy victory over Chester on Tuesday at home, 75-50, behind 21 points from Darien Gillins. The Bulldogs also won at Minisink Valley, 62-43, on Jan. 5; Joe Battle scored 16 points, followed by Dylan Howard (10) and Gillins (9).

The Bulldogs defeated Monticello, 61-42, at home on Thursday to improve to 8-3. The team next travels to Cornwall on Wednesday (Jan. 18).

Beacon’s Damani Deloatch won the triple jump at the Ocean Breeze Freedom Games on Saturday (Jan. 7) on Staten Island with a tally of 43-4. More than 200 schools competed, and the result ranks Deloatch in the top 10 in New York state. 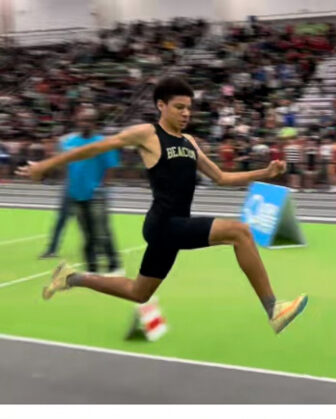 “So many things to be excited about by Damani’s performance,” said Coach Jim Henry. “It was his first victory in a major invitational. There were teams from a dozen states there [the runner-up was from Washington, D.C.], so to come out on top was a huge confidence boost.

“Secondly, Damani’s series of jumps was easily his most consistent performance. Of his six jumps, five were in his top 10 best jumps ever. Lastly, the state championship will be at Ocean Breeze in about seven weeks, so it’s nice to have ‘figured out’ the venue.”

Today (Jan. 13), the Bulldogs head to Rockland Community College for the Suffern Invitational.

Haldane was at the Section I League Championships on Sunday (Jan. 8) at the Armory in New York City. The Blue Devils competed in League 3C with Valhalla, Blind Brook, Pawling, Hamilton and North Salem, and both the boys’ and girls’ teams finished second.

The top finishers included Merrick Williams, Alek Noormae and Christian Ferreira, who took the top three spots in the long jump; the boys’ 4×200 relay team of Milo Pearsall, Jake Thomas, Williams and Noormae was second in 1:40.47; and John Kisslinger finished third in the 600 meters with a personal best of 1:32.28.

For the girls, Samantha Thomas finished second in both the 55-meter dash and 55-meter hurdles; Ashley Sousa won the 1,000 meters; Andreia Vasconcelos was second in the long jump and third in the triple jump; and the 4×400 relay team of Anna Nelson, Eloise Pearsall, Thomas and Vasconcelos won in 4:52.78.

“It was an outstanding team effort, collecting 26 medals,” said Coach Eric Richter. “Haldane has the fewest students in grades 9-12 of the five schools in our league, with Valhalla [the league champ] having by far the largest student population.”

Both teams will face Roosevelt and Marlboro next week.

Beacon defeated Roosevelt, 60-34, on Monday (Jan. 9) but lost to Kingston, Newburgh and Cornwall to fall to 3-6. The Bulldogs’ final meet is scheduled for Wednesday (Jan. 18) at New Paltz.