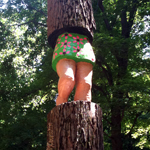 The Lake Surprise Road home of Bill Miller and Marilyn Minter, the painter, is a multi-faceted gem, designed by Stan Allen, principal of Stan Allen Architect and Dean of the School of Architecture at Princeton University.
I say multi-faceted in strict adherence the literal definition: there’s hardly a right angle in the 2000 square foot, split-level modernist structure sympathetically nestled on this sprawling, hilly woodland lot.    There is, however, a genuinely human scale to the flow and movement to the dwelling, and while the colors and interior are design-magazine hip, owing mostly to the owners’ impeccable taste, the building’s lines are disarmingly sleek and the rhythms and modulations of the architectural materials and details pay playful respect to the surrounding land—light, stone, earth, water and of course, woods.
Sunday, July 11th, a maquette of the soaring, multi-planed painting studio extension that they will soon break ground on welcomed a local and NYC art world crowd come to celebrate artist Mike Ballou, who threw a playful wrench in the environmentally sympathetic surrounds with a site-specific polychrome waist-to-ankles sculpture of a girl/woman emerging—just-out-of-reach—from the 40-foot stump of a sugar maple on the property.
The Minter-Millers commissioned the piece after the tree—a significant feature in the landscape visible from the rear deck—was killed mysteriously and rapidly by disease. Rather than remove the bare remains, they topped what was left and requested an artwork from Ballou. A friend and seminal fixture on the Williamsburg art scene known and appreciated for his playful and collaborative aesthetic, Mike had been visiting them, and a new found passion for “whittling” suggested a new life for the tree and landscape.
Hand-hewn over the course of two weeks or so, the partial flesh-toned figure that materializes mid-stride fifteen-or-so feet off the ground, is mischievously “dressed” in bright enamel green, patterned with pink flowers—colors definitely not found in nature—and reminiscent of either a nikki de saint phalle or an R. Crumb figure. The lightness of touch in the rendering reinforces the contrasts of both the fundamental hardness and density of the material as well as the coarse, natural texture of the trunk above and below. 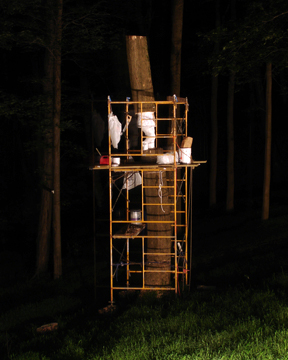 Ballou refers to his woodland nymph as an “intervention” and it succeeds there on a couple of different levels as well, the partial figure abbreviated or abstracted from full representation just as the tree itself is an abstracted abbreviation of it’s former living self. It also wildly disrupts and intervenes on the visual peace of the surrounding woodlands by its unavoidable, prankster-ish presence.
The right leg, slightly crooked as if in the beginnings of some Highland jig, suggests a life and activity that Ballou says is also an intention of the piece: He is well aware of the active decay of the already dead host tree and the consequent transient nature of the work— an aspect he’d like to accentuate by an occasional re-painting of the figure, to alter the skin tone or whimsical clothing’s color and pattern. Such an “extended intervention” would be completely in keeping with the performance/play nature of his art and aesthetic, but for now awaits friendly negotiation with the collectors.