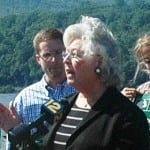 With the Hudson River as a backdrop, New York State Assemblywoman Sandy Galef announced her candidacy for re-election in the 90th District, pledging to continue to fight for the environment, political reform, consolidation of services, and efforts to reduce tax burdens.
Under a hot sun at the Cold Spring waterfront on Wednesday Sept. 8, Galef, a Democrat first elected to the Assembly in 1992, shared the open-air “podium” with Philipstown Supervisor Richard Shea, Philipstown Councilwoman Betty Budney, and Cold Spring Mayor Seth Gallagher. Also on hand were members of the New York League of Conservation Voters, which applauded her environmental record. Galef faces a Republican challenger, William Gouldman, in the November election.
“The environment connects with our health and our well-being and our economic vitality,” Galef said, citing recent successes in Albany and beyond, despite the oft-lamented disfunctionality of the New York State Legislature. Positive developments she listed include restrictions on pesticide use at schools, a reduction in sulfur content in heating oil, cutbacks or bans in phosphates in detergents in some counties, continued funding of state parks despite threats some would be shut to save money, and increased awareness of the benefits of fostering technology and  employment in the eco-sector. “We’re going green in New York State” and generating jobs at the same time in environmentally safe industry, she said. And although wind power “has become very controversial, we’ll get it done. 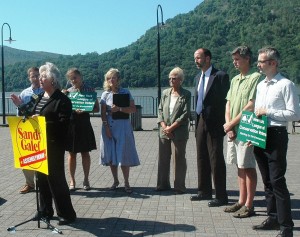 Noting the presence of state parks and other government land in Philipstown, she also touted the state program to make payments in lieu of taxes, as state lands do not produce property taxes as residential or commercial sites do.  Galef and State Sen. Vincent Leibell, a Republican, labored to get Albany to adopt the program. “It saves taxpayers and saves the environment at the same time,” she said.
Consolidation stood alongside conservation as a key issue on her agenda. “We have to make changes so we can better compete with other states that are less complicated” and avoid multiple layers government, she said. She cited the interest expressed in Philipstown in streamlining, with the town exploring the consolidation of emergency services, among other initiatives. Responding to a question from Supervisor Shea, she suggested a new look at school taxes — if not reliance on state income taxes to fund education throughout New York, which may present problems for smaller local jurisdictions, she said, then perhaps a combination of income tax and local property taxes, or even a so-called “circuit breaker” arrangement, providing taxpayers with a state credit for local property taxes. “Maybe the Town of Philipstown wants to have a really good discussion on how our schools are funded,” bringing in representatives from Albany and exploring the parameters in public forums, she suggested. However, she cautioned that serious deliberations on changes in New York must await improvements in the state economy.
Gallagher praised Galef for acting on a bipartisan basis and “putting the interests of the voters, of the taxpayers, ahead” of crass partisanship or individual gain.
“Sandy is a reformer,” Shea said in endorsing her. “She’s actively pursuing reform in Albany right now, working to eliminate government redundancy and save money, while eschewing the mentality behind the “member item,” or bill that in some way benefits the state legislator promoting its passage.
“I’ve never taken member items,” Galef concurred. However, to benefit the community as whole, “I’ve worked very hard to get grants.” As for boondoggles, she added, “I think this is the year for change. I think this is the year for major reforms.”
Given the open land in Philipstown, Cold Spring Trustee Airinhos Serradas, in the audience, said that “institutional conservation is all well and good” but questioned Galef about other possibilities.
“I just want to keep what we have now,” payments in lieu of taxes, already controversial, without trying to adopt more “aggressive” measures, Galef replied.