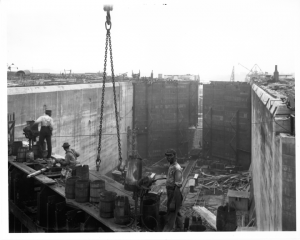 Panama Canal, the latest film from documentary director and producer Steve Ives will be shown this Monday, Jan. 24, on PBS, from 9 to 10:30 p.m.  Ives, a Garrison resident who is also the founder of Depot Docs , is a leading documentary filmmaker. From his landmark series The West, seen by more than 38 million people nationwide in 1996, through a long collaboration with filmmaker Ken Burns, acting as co-producer on The Civil War and Baseball, Ives has touched upon a wide-ranging panorama of subjects, from Lindbergh to Amato: a love affair with opera, to Reporting America at War, to his more recent efforts, directing five films for American Experience: Seabiscuit, Las Vegas, New Orleans, Kit Carson, and Roads to Memphis.
The press release from American Experience describes the background of the film as follows:

“On August 15th, 1914, the Panama Canal opened, connecting the world’s two largest oceans and signaling America’s emergence as a global superpower. American ingenuity and innovation had succeeded where, just a few years earlier, the French had failed disastrously.  But the U.S. paid a price for victory: more than a decade of ceaseless, grinding toil, an outlay of more than 350 million dollars — the largest single federal expenditure in history to that time — and the loss of more than 5,000 lives. Along the way, Central America witnessed the brazen overthrow of a sovereign government, the influx of over 55,000 workers from around the globe, the removal of hundreds of millions of tons of earth, and engineering innovation on an unprecedented scale.  The construction of the Canal was the epitome of man’s mastery over nature and signaled the beginning of America’s domination of world affairs.
The story of the Canal features a fascinating cast of colorful characters ranging from the indomitable Theodore Roosevelt, who saw the Canal as the embodiment of American might and ingenuity, to Col. William Gorgas, an army doctor who instituted a revolutionary public health campaign that all but eradicated yellow fever, to the visionary engineers who solved the seemingly impossible problem of cutting a 50 mile-long slice through mountains and jungle. The film also delves into the lives of the thousands of workers, rigidly segregated by race, who left their homes to sign on for an unprecedented adventure.  In the Canal zone, skilled positions were reserved for white workers while a predominantly West Indian workforce did the backbreaking manual labor, cutting brush, digging ditches and loading and unloading equipment and supplies. Using an extraordinary archive of photographs and footage, rare interviews with canal workers, and first hand accounts of life in the Canal zone “¦[The Panama Canal] unravels the remarkable story of one of the world’s most daring and significant technological achievements.”

Ives told Philipstown.info that what fascinates him most about this piece of history is that, “The building of the Panama Canal reveals so much about America at the dawn of the 20th century — our optimism, our extraordinary ingenuity, and also our arrogance. As a young nation we were determined to play a role on the world stage, and the completion of the canal really signaled that the American century had begun.”
For more information on this film and Ives’s other work, visit http://www.insigniafilms.com/.