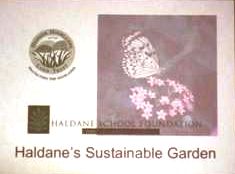 Back in August (remember August? Yes Virginia, there is an August), ground was broken on Haldane’s new sustainable garden.   During the ensuing months great amounts of bramble were cleared, planters were built, drainage established and composting was begun.  Local food establishments have provided coffee grounds and the students in Mrs. Andersen’s and Mrs. Geller’s Special Education class were very excited to be the first to work in the garden and plan for its future. They’ve been working hard and the garden has been built into their year-round curriculum, which now, according to Mrs. Geller, includes such topics as “decomposition, microorganisms and bacteria.”
With the sighting of the first snowdrops (or, as one of Philipstown.info’s recent comment-writer waxed almost poetically the other day: “five signs of Spring this morning at The Cove. Snowdrops are visible, buds on bursting forth on the Pussy Willow trees, 4 Red-Winged Blackbirds sighted, three ducks in flight and Ron’s Bassett Hound ate some mud — yes the thaw is finally here.”)  the garden is ready to do its growing thing, and for that to happen, more volunteers are needed.  The goal is to inaugurate the garden during Haldane’s “Earth Week” in early April.  For that to happen, soil needs to be put into the garden beds and then the seed planting and maintenance will truly begin.
A meeting was held last week at Butterfield Library to welcome those new to the volunteering pool and to assign specific and concrete tasks to all who are willing.  Those in attendance included several newcomers with, as one put it “no talents, much enthusiasm,” and others with backgrounds tailor-made for the endeavor, including a former organic farmer and the director of education and public programs at Wave Hill gardens in the Bronx. They were joined by Melissa Angier and Beth Sigler, who have been working on the project for about three years now, and others who have been active for almost as long. Also involved since the inception, but not present at this meeting, were Susie Allison and Elise LaRocco.
The topics discussed at the meeting included the nuts and bolts of gardening and who was going to do it and oversee the doing of it; the incorporation of the garden into the Haldane curriculum, and how to best make use of the talents of the local garden clubs, Cornell Cooperative, interns and other community volunteers. 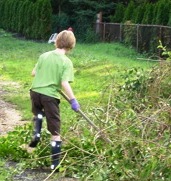 Sandy McKelvey, who has brought the Farm to Table program to the school spoke of the program’s first few months at Haldane.  Describing the basic concept of the once-a-month classroom creation of a dish based on a featured vegetable, which is then served as a cafeteria choice to the entire school, McKelvey called it very successful. “For example, before Chef Mark comes in, the kids choose the vegetable.  Broccoli won the vote the first time, and then next month was pumpkin.  The kids made the dish together, named it together and a week later they served it to the school.”
Describing it as interesting to see the theory of “if children participate in cooking something they are more likely to eat it” validated through “pretty much the only kids who tried out the pumpkin soup were the kids who had made it in the classroom,” McKelvey said that an appointed teacher liaison was needed to work with individual teachers on curriculum.  Noting that there were “tons of curriculum ideas out there” McKelvey also suggested that maybe having a  “garden parent” for each classroom, along the lines of the class parents, would be a good idea.  McKelvey also spotlighted the donations of pumpkins from Madura Farms and milk from Hudson Valley Fresh and called the Haldane food service staff “very encouraging in their support of the program.”
The discussion then shifted to whom else to turn to in the community for gardening expertise and plain old labor. A suggestion was made to contact the Philipstown Garden Club, which has already helped to beautify the Haldane campus with flowerbed plantings.  Mention was made of the Garden Club’s high school internship program, and also of connecting with the Haldane Honor Society, whose members have community service 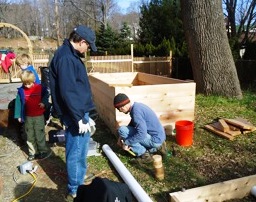 Preparing the garden this Spring

requirements, with thoughts that some high school students might be enthusiastic about helping the younger students with the garden. The Cornell Cooperative Extension, with its corps of Master Gardeners, was also brought up as a potential source of mentoring and assistance.  The Highlands Garden Club is also becoming involved. Alliances with nearby school and community gardens such as the Food Pantry garden begun by Haldane student Tess Dul, and one in Newburgh were sought.
Also touched upon was fundraising needed for the maintenance of the garden and for wish list items such as a shed and a trellis.  The garden was established with funds from the Haldane School Foundation and from the Hudson Highlands Land Trust.  Those from the Foundation have now been depleted, while about half of the Land Trust monies remain. Fundraising possibilities through children’s artwork turned into stationery items and also through sales of organic coffee were discussed. To become involved in the Haldane sustainable garden, get in touch by sending an email [email protected]
Photos by B. Sigler