The Philipstown Town Board last Thursday dropped the Historic Preservation Adaptive Re-use Overlay (HPO) from its draft rezoning, citing the need for a more “holistic” approach and concerns that the HPO had generated far too little — not too much — public reaction and that a late-breaking groundswell of opposition could threaten not only it but the entire rezoning package. With Councilwoman Barbara Scuccimarra the sole advocate of retaining the HPO, Supervisor Richard Shea and Councilwomen Betty Budney and Nancy Montgomery and Councilman John Van Tassel voted March 24 to delete the overlay from the rezoning draft, though they characterized the move as more of an HPO delay than demise. The board also tentatively agreed to form a subcommittee to review the situation of the approximately 38 historic properties that could be covered by a redrawn HPO.
“This issue doesn’t die today. We think that conceptually it’s a good idea,” Shea said of the HPO. However, he continued, “this is a big change. I think it’s worth taking a broader look at it. We haven’t given this a holistic look.” He noted that “my biggest concern is that enough people aren’t aware of this” overlay and that trying to boost public knowledge quickly or addressing belated attacks on the HPO “potentially could hold up the entire [re]zoning. And I am completely unwilling to go that route. It takes people a lot of time to get up to speed,” he explained. “We certainly don’t want to make or relive some of the mistakes we made early on in the zoning, or have some of the missteps we had.”
Added to the rezoning draft document last November,  relatively late in the process, the HPO was intended “to allow use-flexibility for the adaptive re-use of buildings that are listed on the National Register of Historic Places that are on parcels of 15 acres or more, in order to provide economically viable ways to rehabilitate, maintain, and re-use them.” As the text of the November draft also stated, the idea was to give owners of historic estates “greater use flexibility than is allowed by the underlying zoning” if they agreed to “significant protection of historic and open space resources.” 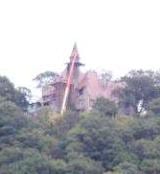 The first likely beneficiary of the provision was expected to be Castle Rock LLC, owner of the 1880 Osborn Castle, which perches above Route 9D in Garrison and resembles a turreted medieval fortress. At a formal public hearing on the rezoning in February, when Richard O’Rourke, a Castle Rock LLC representative, praised the HPO and mentioned his company’s intent to protect and adapt the castle for an appropriate use, his comments drew applause. Since then, some castle neighbors have expressed fears of adverse impacts, including increased traffic on their mountaintop road. As Town Board members noted on Thursday, under the basic zoning, the castle can only be used as a family residence or bed and breakfast. Under the HPO, the range of possible uses would have expanded, subject to approval of the town’s regulatory committees, such as the Planning Board.        Along with concerns about Castle Rock LLC’s plans, some local residents also criticized application of the HPO only to parcels of at least 15 acres, making smaller historic estates ineligible. Shea described the 15-acre limit as worth reconsidering. He also explained that he, Castle Rock LLC, and castle neighbors had met March 18 for 90 minutes, discussing possible problems with traffic, ownership of the road to the castle, and similar repercussions of the castle project. “There were some questions that were brought up that are legitimate, and both sides definitely have their points,” he said.
O’Rourke, an attorney who appeared at the Thursday board meeting with two Castle Rock colleagues, defended the HPO and said that anything Castle Rock LLC did with the castle would have to meet the usual town regulatory demands regarding water, septic arrangements, cars, and so on — even with the HPO in place.  “What you’re giving us is not anything but an opportunity, a chance to come up with a use plan,” he said. O’Rourke debunked notions that Castle Rock wants to create a mega-resort atop the ridge. “To suggest we could put up some spa that could attract hundreds of people a day — it’s not going to happen. We know that.” The Castle Rock contingent likewise told the board that the castle, despite its apparent size, only contains nine rooms and that increasing the scope of what can be done there enhances their ability to raise investment money and save the castle.
“I do not want to see it go into ruins. That’s the worst thing,” Budney remarked. “It started to crumble for so many years and wasn’t really taken care of.”
“We would love to see the castle preserved,” Shea emphasized. “I think everybody in town agrees on that.”

Parsing ‘Adaptive Re-use’
The meaning of “adaptive re-use” prompted questions from Councilwoman Nancy Montgomery. “I see this as a really broad term. I feel like we need to get to what’s really going to happen here,” she said. “I think this [HPO] needs a little more time, maybe some revisions. To leave it open right now the way it is leaves us open, I think, to a lot of implications.” At the same time, she stressed, when it comes to adaptive re-use of old structures, she can see fundamental, positive effect, “the potential for economic development in our town, employing people in an industry I work in,” the hospitality-restaurant business.
Supervisor Shea said the fact that so far little public opposition has arisen to the HPO doesn’t mean most of Philipstown is satisfied; instead it could mean that “the minute you adopt it or the minute you include it, word gets out and suddenly you’re having a deluge [of complaints]. It’s happened multiple times.” Arguing for retention of the HPO, Scuccimarra — the lone Republican on a board of Democrats — said that “as we know, you’re never going to please everybody. There’s always gong to be contention on some point. Would it be so outrageous to leave the HPO in,” with the understanding that it could be revisited, “looked at broadly” and tweaked if cause arises, she asked. “I’d vote to keep it in.” She also said that Castle Rock LLC had come to the board in good faith but “now I feel like we’re kind of hanging them out, and I’m sorry about that. I believe this castle should be enjoyed by multiple people and not just crumble.”
“I’m very torn,” Councilman John Van Tassel said before the vote. Nonetheless, he went on, “to me it’s bigger than just this one. There’s a total of 38 [estates possibly involved]. And I think we need to take our time “¦ and be open to how this is going to affect the rest.” He praised Castle Rock LLC’s initial repairs to Osborn Castle.  “I think you’ve done a wonderful job and I hope you continue. I’d hate to see this [HPO] thing tossed. I think we need to press on, to come up with some way to get this included, whether it’s now or later. We need to have some way to preserve and protect these monumental pieces of property, because they make up this town.”