With the abundance of local musical talent around, if you’re invited back to perform year after year, it’s a pretty good bet that what your playing and singing is crowd-pleasing. Tenbrooks Molly is returning to Butterfield Library for the fourth time, and judging from previous response, there’s a solid likelihood of a fifth and beyond. Tenbrooks Molly is a traditional country and rockabilly band. Twangs, git-ars, lyrics with a heartache or three in ’em — that kind of music.       The band, formed over 25 years ago, consists of Cold Spring’s Sal and Paulette Califano (playing lead and acoustic guitar respectively, both on vocals); Bart Richards on bass and Thom Johnson, drums. The Califano’s son Bobby will also join them on drums for a few tunes at the Butterfield. The songs Tenbrooks Molly play most often date from the 1950s and ’60s. Growing up in the Bronx (that’s right, well hey”¦ it’s south of Philipstown if not precisely in the cotton belt”¦), Sal Califano loved country and bluegrass music and in fact wanted to learn the banjo but lacked a teacher, so he picked up a guitar instead, which he wound up teaching himself anyway, largely by listening to artists like Lester Flatt and Maybelle Carter. As he describes it, in the late ’60s he “experienced a revelation” hearing Don Rich and Clarence White play the telecaster, and his “musical future was defined.” Sal and Paulette met musically, through musician friends Paulette had become friendly with while singing demos in NYC recording studios, her alto trained through years of “being the loudest voice in the chorus.”
Their MySpace page bio relates more of their musical history, “Their mutual love for country music and instant ability to sing together led them to form Neon Amber, a band which never got past the rehearsal stage. In 1980 after struggling to find musicians willing to play traditional country music, Tenbrooks Molly was formed. They had their first public performance in the summer of 1981 at the Rodeo Bar in New York City. Tenbrooks Molly became favorites of real country music fans during the Urban Cowboy boom of the 1980s. They were favorites of public radio logging countless hours of live shows. Sal’s country music expertise [was] used by WFUV to produce several 3-hour radio shows on artists such as Mel Street, Johnny Horton, The Louvin Brothers, etc. Sal and Paulette semi-retired in 1992 to raise their three children and yellow lab.” 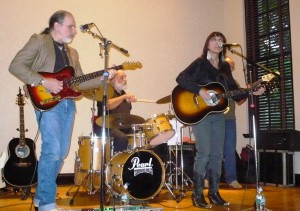 Tenbrooks Molly at a past Butterfield Library performance

Sal and Paulette came to Cold Spring 15 years ago looking for a simpler place to raise their children, who were then babies. They were the house band at the old Cimmaron Ranch in Putnam Valley in the 1980s and always liked Putnam County. They felt it was the right place for them and have never had one regret about leaving the Bronx and raising their children here. Paulette works as a teacher aide in kindergarten at Haldane and Sal is a jewelry model maker. It was easy for them to make the choice between the lifestyle of musicians, and a more settled existence. Paulette explains, “When we had our children we felt it was more important to be with them when they were babies, as playing music tends to have long and crazy hours associated with it, but as any one who loves to perform knows, it is hard to stay away from it permanently, and as soon as they were old enough, the desire to play out in front of people lured us back to playing live. Right now we play very often at Henrys’s at the Inn on the Hudson in Peekskill, the Spruce Hill Inn in Putnam Valley and any concert, private party or town show that will have us. We have also played at the Silver Spoon and the Depot Theater in the past. We truly love real country.”
They list their musical influences as such “real” country artists (hold the crossovers) as Don Rich, Loretta Lynn, Buck Owens, Tammy Wynette, Patsy Cline, George Jones, and Waylon Jennings. The mission of Tenbrooks Molly is to “keep traditional country music alive for the many fans who love it and to introduce it to those who don’t really know what country music is.” They intend on “bringing back the sounds of Bakersfield, the Louisiana Hayride, and the Golden Age of Nashville.”
Paulette Califano gives the history of the band’s catchy name: “The name Tenbrooks Molly was taken from the Bill Monroe bluegrass classic song about two racehorses. The song is called Molly and Tenbrooks. We wanted a name that would instantly mean something to traditional country/bluegrass fans so we chose Molly and Tenbrooks and just switched it around to Tenbrooks Molly. We actually met Bill Monroe when we were first starting out and told him about our plans to use this name and he told us it was fine with him and he wished us luck.
The concert is free and will begin at 7 p.m. Families are more than welcome. For more information, please visit www.butterfieldlibrary.org or call 845-265-3040 x 4.