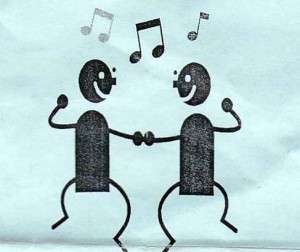 For an itty-bitty school, the numerous gifts of Haldane’s students are outsized.  That much was evident at the second incarnation of the newly invigorated Haldane Talent Show, which took place last Friday, April 29, at the school’s auditorium.  Eclectic as a talent show should be, the lively night featured performances from students, teachers and even a soon-to-be-retiring Elementary School Principal — Maggie Davis, providing a wistful end to the evening. 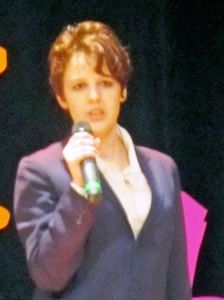 Freshman Mina Elwell welcomed the audience and proved a confident and encouraging emcee throughout.  The house band of Mike Klubnick (a/k/a the 9th grade English teacher), Patrick G. Cummings and John Stech got things going playing for Elwell, Alison Duncan and Lindy Labriola on a rousing “Kids in America” which got the audience primed for a set of Blues Devils rock ‘n soul, including Springstein’s “Fire” and Sam & Dave’s “Soul Man.”  Blues Devils (Conor Austin, Matt Chason, Patrick Daponte, Mina Elwell, Lindy Labriola, Pat Junjulas and James Rubino) hit their stride with all of the instrumentalists, percussion, bass, saxes and guitars, finding a groove.  Singers Chason (who donned 60s shades for “Soul Man”), Labriola and Elwell kept the energy going.  Chason followed with a solo, during which he encouraged the audience to participate, chiding them that “only two percent to fifteen percent of you are singing along” “¦! 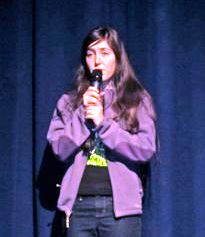 Emma Kimmel going round the world

Footprints, the first of several bands, followed with their own composition, and then Cheyenne Vickers got the crowd clapping with a cover of Avril Lavigne’s “Sk8ter Boi.”  Then, in one of those moments just tailor-made for talent shows, Emma Kimmel came out and did her thing, which was a speed-talking recitation of every country in the world.  Handily for Emma, should she have missed any (doubtful), no one in the crowd would have been able to tell, such was her whirlwind delivery.
Lindy Labriola, who performs frequently all over Philipstown, was unfazed by a sound cable problem at the start of her cover of Bob Dylan’s “Make You Feel My Love” and showed no rattled nerves.  The only thing wrong with Aidan Gallagher’s banjo playing on “Old Kentucky Home”  was that it “wasn’t long enough” according to the people in my row.  Longer one next time, because the crowd enjoyed it, okay Aidan?

The mood was quieter as Catriona Daly sang “Only Exception” accompanied on guitar by Anna Ledwith, and then went up-tempo again as Simrin Gosal and Kiran Singh, wearing colorful tunics of gold, maroon and teal, told a story through their traditional Indian Bhangra dance, performing in unison.  Catriona Daly returned to the stage, this time accompanied by Simon Close, on piano, for “Falling Slowly” from the movie Once, Close giving a pre-song dedication to “Wills and Kate” whose royal wedding had taken place earlier in the day.

Kiran Kalantri took the lead vocals on “Hey Ya” with band members Elizabeth Bengal, Will Simone and brothers Nick and Matt Marino and then the Saxophone Ensemble of Quinn Kohut, Jackson Lisotta, Conor Austin and Sean Daly played an atmospheric “Pink Panther” accompanied by a gang of sneaky Kool Kats in shades.  Closing out the first half (whew!) were the Boogie Woogie Bugle Girls: the Haldane Blue Notes vocal group, who sang and tapped their way through “Boogie Woogie Bugle Boy” with the assistance of real-life Bugle Boy Ben Neill, professional composer and musician and father of Blue Note Kady Neill.
The hard working crew of Anna Ledwith (Stage Manager), Frank Caccetta, Jacqui Ferguson and Jack Quigley got things set up for the second act while the Leo Club sold intermission refreshments.

Could it be possible that there was still more talent?  A whole second act’s worth?  Yes!  The band In Motion got act two started with an original tune.  Band members are Micah Adams, Collin Harrington, Tim Hughes, Jackson Lisotta, Tim Suits and Richard Vallejos. Emcee Mina Elwell, changed from shorts into a suit to deliver David Bowie’s “Boys Keep Swinging” and another group, consisting largely of seniors, Us, Naked, incorporated violin into their original composition, “Wear Your Hair” a sample of lyric going “The way you wear your hair makes me stop and stare.”  Us, Naked is Elizabeth Bengel, Tess Dul, Stephen McCann, Nick Marino and Will Simone.

YMCA, A modern interpretation being interpreted

Perhaps inspired by their dance moves in Grease, a group of boys took on the disco “classic” (“classic” being loosely-defined) “YMCA” and created choreography including (this was advised to me by the ninth-grader next to me) the very current “Rick Roll” move, which defies written description to some extent. These Village of Cold Spring People were Conner Brennan, Simon Close, Aidan Gallagher, Patrick Junjulas, Kiran Kalantri, Matt Marino and Peter Spratt.
Mary Mechalakos, accompanied by her parents Martha and Jim provided a touching version of “First Time Ever I Saw Your Face” telling the audience that the song was one that her parents listened to while dating and “this is my way of saying thank you and I love you very much.”

Then, in the moment the crowd was waiting for, remembering last year’s highlight in which some of the female teachers created a thrilling “Thriller” the Chillin’ teachers, a/k/a The Ice Pack, returned and outdid themselves with a scorching dance routine to Vanilla Ice’s “Ice Ice Baby,” pumping up the audience big time. 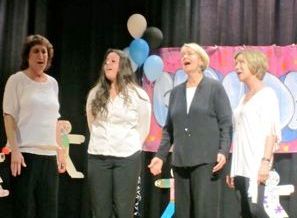 Hard act to follow, but Chrissy Glorius followed it nicely with her gentle “Shine,” accompanying herself on guitar.  A quartet of staff, including Maggie Davis, Susan Kelly, Jodie Rowland and Kristen Savastano, dressed in their concert attire of black and white, no sneakers, harmonized on “I Get By With A Little Help From My Friends” and Forrest Ryzy-Ryski performed his own composition, “Clearly.” He was then joined by Lindy Labriola and Kady Neill for a three-vocalist cover of “Helplessly Hoping” by Crosby, Stills and Nash. 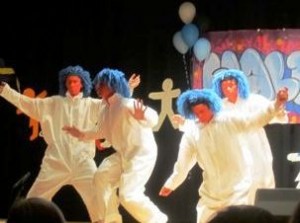 Broadway belting got its due through the tandem efforts of Liz Richter and Kady Neill on “I Know Him So Well” from Chess and then the indescribable Oompa Loompas came out and did their Oompa Loompa thing.  The evening was closed out by the full cast, full of energy, performing “Jump Around” by House of Pain.  Maggie Davis, who will be retiring in June, evoked Carol Burnett by coming on in  washerwoman garb and singing “I’m So Glad We Had This Time Together” which few or none of those on stage would have been familiar with, but which met with some aahs from the parents and grandparents in the audience. 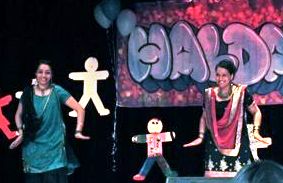 The evening was put together by Mike Klubnick, Debbie Contini and Stacy Labriola with Wylie and Damian McDonald doing outstanding work on the sound, as did Tyler Mell with the lighting.  The performance was documented by Quinn Kohut (photography) and Alec Lane (video).  Lots of others pitched in, including, as always, the very hard-working custodial staff.
What brought the evening its special atmosphere was the mix of ages that make up this K-12 campus, with a gauntlet of adoring very young students seated on the floor in front of the chairs, cheering on their “elders.”  In no time at all, they will be up on the stage, displaying their talents to the next generation. And one comment was heard more than once at the conclusion. Something along the lines of: Haldane male teachers: bring it on.  Next year, be there.
Photos by A. Rooney

3 thoughts on “Banjo, Bhangra, Boogie Woogie and Beyond: the Talents of Haldane”