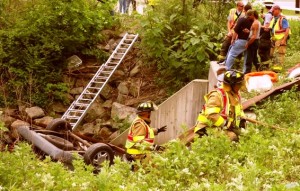 A mini-van carrying three women passengers crashed through a metal guardrail on the north side of Route 9 at Indian Brook Road in Garrison at around 10 a.m., Sunday, June 5.  According to eyewitness Jim Farinelli, a Cold Spring resident, the vehicle suddenly veered off the road, skidded across a grassy knoll, just missing the Bird and Bottle sign, and then fell into an open space where it landed at an angle perpendicular to the ground on a concrete platform next to the brook. A large section of the guardrail lay beneath and around the van. All three women survived the unexplained accident, which did not involve other vehicles.
“At first I couldn’t believe what I was seeing,” said Farinelli. “I was coming home from church, driving behind the car and it just suddenly went off the road. I stopped along with two other people. I called 911 while they tried to help the people in the van.” Farinelli said he was glad he was there to see it happen.  “At a different time they could have been down in that hole and no one would known it for quite a while,” he said. 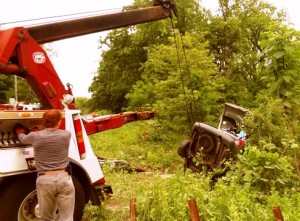 Van being pulled from hole

J. McSorley, a paramedic with Trans Care, the official Putnam County ambulance service, said the victims were all in their early 30s. McSorley said she, along with responders from the Philipstown and Cortlandt ambulance services, removed the victims from the scene and transported them to helicopter landing zones in the parking lots of Papa John’s Pizza and the Garrison Volunteer Fire Company, both on Route 9.  The victims were then flown to St. Francis Hospital and Westchester Trauma Center. McSorley said they were suffering from head trauma and required further evaluation.
All four-area fire companies, North Highlands, Cold Spring, Garrison and Continental Village, responded to the scene. There was no explosion or fire but firefighters kept hoses trained on the vehicle while others assisted in the victim- extraction.  Both the New York State Police and the Putnam County Sheriff’s Department were also on the scene. The Rodak Towing Company from Garrison was brought in to remove the vehicle.
Photos by K. Foley