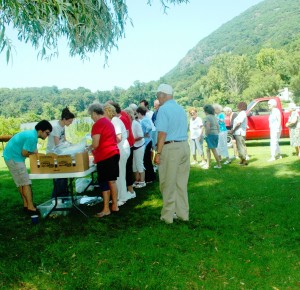 Picnickers of all ages line up for lunch

Many attendees spoke of coming to the picnic every year

With near-perfect weather, a mayor and trustees as hosts, and a chorus of youngsters to entertain them, at least 80 “oldsters” celebrated summer and each other’s company Saturday (Aug. 20) at the Cold Spring Senior Citizens’ Picnic. Held at Mayor’s Park along the Hudson River on Fair Street, the event – a fixture for at least 16 years – featured hotdogs and burgers, salads, watermelon, cheesecake and beverages, including chilled beer. Along with sponsoring the party, Cold Spring Mayor Seth Gallagher and Trustees Bruce Campbell, J. Ralph Falloon, and Charles Hustis took on “kitchen” duties, alongside three volunteers.

Many attendees spoke of coming to the picnic every year. “It’s a wonderful time. I never miss a day,”Philipstown resident John Gilsenan said. “We enjoy it and it’s nice that they do it.” What’s more, he noted, the hosts may be elected office-holders, “but they don’t really push themselves on us.”

Cold Spring village resident Flip Rodino suggested that it’s fitting for Cold Spring to toast its older residents once a year. “Why not?” he asked mischievously. “We pay the taxes, don’t we? 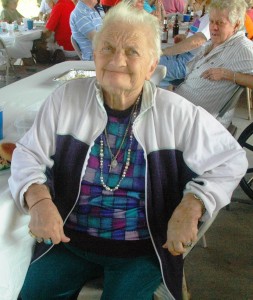 When asked whether she was enjoying herself, Cold Spring resident Rose Cava beamed and nodded. “You going to take my picture?” she wondered, urging a photographer to record the happy moment.

Tending to host-chores, Falloon said the Village Board members enjoy the outing as much as the seniors. “It’s a beautiful day, it’s easy flipping plates and burgers, and they’re all happy,” he said of the attendees, old and young alike. “It’s a pleasure for us to do this,” the mayor said in welcoming the seniors to the picnic. “It’s one of the most enjoyable things I get to do.” He praised Campbell as “the one who puts this whole thing together” and all four board members present drew rounds of applause. Campbell in turn said that “everyone contributes to this,” including “just about every restaurant and every shop in the place that sells food,” plus a few other establishments: Angelina’s Restaurant & Pizzeria, Cathryn’s Tuscan Grill, Cold Spring Fire Company No. 1, Cold Spring Pizza, Cup-a-Ccino Cafe, Dairy Mart, Depot Restaurant, Drug World, Foodtown, Foundry Cafe, Go-Go Pops, Hudson Hil’s Cafe & Market, Hudson House-A Country Inn, McGuire’s on Main, the Main Course, Pali’s Lunchbox Deli, Pete’s Hometown Deli, Pig Hill Inn, Riverview Restaurant, Silver Spoon Restaurant, Whistling Willie’s American Grill, and Yannitelli Liquor. Volunteers Stephanie Hawkins, Jeff Anderson, and Jim Corless helped serve food and assisted in various ways.

As the festivities drew to a close, seven cast members from the Depot Theatre’s youth production of Bye Bye Birdie serenaded the audience. “Put on a happy face!” they sang out. Judging from the smiles and laughter at the picnic, even before the music began the seniors had taken that advice to heart.
Photos by L.S.Armstrong