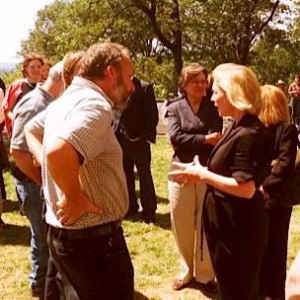 The movement to promote locally grown produce on sustainable farms received a big boost last Wednesday (Aug. 24) when U.S. Sen. Kirsten Gillibrand (D-N.Y.) introduced new legislation that would authorize and fund a U.S. Department of Agriculture program offering competitive grants to stimulate the growth of Community Supported Agriculture (CSA) across the country. Click here for a short video.
Gillibrand chose the 225-acre Glynwood Farm in Philipstown as the location to make her announcement before an audience of farm activists and local officials. Glynwood, a non-profit organization off Route 301 a few miles east of Route 9, is active in the CSA movement and other initiatives to create more local farms and strengthen existing ones.
Gillibrand praised the CSA system for directly connecting consumers with the farmers who grow their food. At the beginning of each growing season, members of a CSA pay for a share of a farm’s produce. Throughout the season, members receive a weekly box containing their share of the farm’s yield for that week.  As a group, CSA members also share in the downside farm risks of weather and other problems, which can mean a reduced or lost crop. Advocates emphasize that the risk sharing makes more local farms more sustainable.
CSA can be a key component for providing our families with more locally grown produce, said Gillibrand, who notes she is the first New York senator to serve on the Senate Agricultural Committee in 40 years. Tens of thousands of families have joined CSAs over the years, bringing fresh, vitamin-rich fruits, vegetables, eggs, homemade breads, meats and cheeses to tables all across America. Supporting and promoting local businesses and a healthy diet, this arrangement benefits both the farmer and the customer, said Gillibrand.
The Community Supported Agricultural Promotion Act would award federal funds to non-profit organizations, extension services, and state and local governments to provide grower support in marketing, business assistance, crop development and the development of innovative delivery and distribution systems, according to Gillibrand.

Gillibrand’s proposed legislation contains a special provision to give preference to farms that employ or are owned by veterans. Statistics show that more than 45 percent of service men and women live in rural communities. Service members returning home to their families and experiencing high employment often find farm work as a way not only to make a living, but also to help ease their transition back to civilian life, said Gillibrand.  Her bill would also reward efforts to distribute fresh food in low-income areas. According to Gillibrand, more than 12,000 CSA farms currently operate throughout the U.S. with approximately 350 in New York State, including Glynwood.  Officials at Glynwood said 135 local families currently belong to the farm’s CSA program. 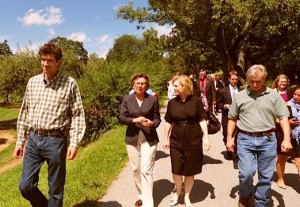 Escorted by Judith LaBelle, president of Glynwood, Gillibrand took a brief tour of some of the farm’s operations. Ken Kleinpeter, director of farm and facilities, and Dave Llewellyn, CSA manager, provided briefings for the senator. Llewellyn presented Gillibrand with a bag of produce at the end of the tour. Among  local officials greeting Gillibrand and taking a brief tour of Glynwood’s operations were Philipstown’s State Assemblywoman Sandy Galef, who told Philipstown.info I like the senator’s focus on childhood nutrition, which as been a focus of mine for a long time. I am really excited she wants to do something on the federal level. I also like that her issues have expanded to the security of food and promoting better understanding of where food comes from, she said. Also appreciative of the senator’s remarks and legislation was Philipstown Town Council/Board Member Nancy Montgomery. I think this is wonderful; this is how we present the future to our children. I would like to see the program here [at Glynwood] expanded, she said. Other  officials present included Putnam County Executive Paul Eldridge, Sheriff Donald B. Smith, and Philipstown Legislator Vinny Tamagna, as well as Philipstown Town  Supervisor Richard Shea and Council Member Betty Budney, along with  Nelsonville Trustee Ande Merante.
Photos by K.E. Foley