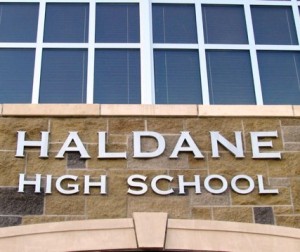 Just before the vote, Haldane Board of Education president Joe Curto said, “I firmly believe this…agreement is in compliance with the new [New York State] tax cap that we all must come to learn is the new normal. This also isn’t much different [in terms of what] we’d be paying if we came to an impasse and were subject to the laws of collective bargaining in New York State.” Curto outlined what he considers to be the other key aspects of the new contract.

• Teachers who qualify for “step” increases in salary in years two and three won’t receive that increase until February, a move Curto said will save the district approximately $144,000. Teachers are eligible for “step” increases, payment above and beyond the annual salary increase, in each of their first 18 years of teaching.

• Terms governing “shared savings” were altered in the contract – savings that the district and teachers share when a teacher opts out of Haldane’s health coverage, usually because they are covered through their spouse’s benefit package. Curto said that changing the teachers’ share from a percentage to a fixed amount will result in savings of approximately $45,000.

• The district’s contribution to the HFA Trust Fund for dental and vision coverage was reduced from $1,701 per full time member to $1,000 in years one and two and $1,350 in year three. Curto said that reduction will result in approximately $154,000 in savings for the district. 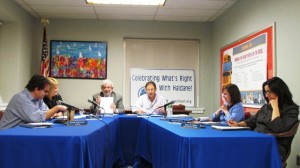 School board is all “smiles” after contract settlement

Curto praised the HFA for its handling of the negotiations. “The membership and leaders of HFA acted professionally in this process and never allowed the heated moments of public sector collective bargaining to interfere with the classroom, our board process or the community. That’s not always the case in other districts and [HFA] should be recognized for that publicly. Our teachers are professionals,” he said.

Haldane School Board Vice President Mike Junjulas, along with Trustee and past president Dave Merandy, served as the district’s negotiating team along with labor lawyer Mike Lambert. Neither Junjulas nor Merandy was able to attend the Nov. 15 workshop. Junjulas is away on an extended work assignment and Merandy, recently elected to the Philipstown Town Board, was absent due to an injury suffered just prior to the election. Both had signed the MOU (memorandum of understanding) in support of the new contract. Junjulas submitted an email to his fellow trustees, indicating that the road to a new agreement had been rough at times. “We started negotiations last year and by the end of the school year both sides were pretty much at an impasse.”

After the HFA held its elections in May, a new team was appointed to represent the teachers, including incoming president Alison Casey. “I…thank HFA president Alison Casey and her team for coming back to the table with reasonable requests, which in turn allowed both sides to stop the impasse road we were headed down,” Junjulas said in his email. While he would liked to have seen even more savings for the district, Junjulas said, “…after sometimes heated discussions, I believe both sides gave up some items, all the while keeping our country’s and New York State’s financial troubles in view.”

For Casey, in her 19th year as a special education teacher at Haldane, it was a second venture into contract negotiations. “I was involved briefly in negotiations for the 2008-2011contract, so I was familiar with the negotiating process,” she said when contacted by Philipstown.info. “There was give and take on both sides. HFA was pleased with the final agreement. The overall feeling is that [it] is fair for both sides, especially during these difficult economic times. The membership understands the district’s financial constraints, and appreciates the percent increases and the step movements. The Sept. 1 step movement, followed by a hold on step in years two and three … was a compromise on both sides. The fact that both sides were prepared and able to communicate effectively was crucial to the process.”

Superintendent Mark Villanti told Philipstown.info that settling the contract will help the district in the months ahead. “Settling the contract…brings stability and …allows for greater predictability in the budget process. The economics of the agreement helps us function within the new tax cap.” With the contract now settled, Curto hopes there will be a shift in emphasis. “Let’s …now refocus all our energies on improving teaching and learning at Haldane,” he said.
Photos by M. Turton