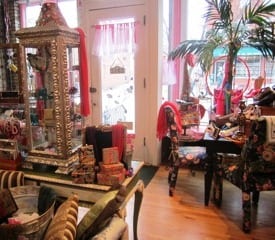 Looking inside out, towards the front door of Suzi Q's Emporium

It sounds like the storyline of one of those movies they don’t make anymore. City-dweller spots a classified ad about an Irish goods store for sale in a small river town. She takes the train up, falls in love with the place instantly and buys it and winds up making her home happily ever after in the area, and opening up other small businesses along Main Street through the years. Quaint, but these kinds of things don’t happen in real life?  Not true, because that’s the story behind Susan Elliott, and Mary Jane Nagel, of Back In Ireland, Reigning Dogs & Cats Too, and proud new mamas of Suzie Q’s Emporium, which has just had a ‘soft opening’ at 65 Main Street.  An official ‘grand opening’ will take place in the near future. 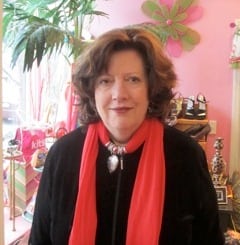 Susan Elliott, wearing one of her Valentine's scarves

Twelve years ago, Elliott did indeed spot an ad in the New York Times for an Irish goods store.  Having a lengthy background in both retail (since the age of 16) and real estate, as well as being “one hundred percent Irish — well Irish-American, dual citizenship” Elliott was intrigued and headed north on the train. Through the years, the original store has changed locations a few times, expanding and contracting depending on the space at hand. It is currently is located adjacent to Reigning Dogs & Cats Too, occupying perches on the hill as it slopes up to St. Mary’s.

Despite being completely unfamiliar with the area when she moved here, Elliott, who grew up in Westchester, took to it right away, instantly meeting a lot of people, and serving as vice president of the Cold Spring Area Chamber of Commerce for a couple of years. She has found the local community extremely supportive, both shoppers and fellow business owners.  “The community welcomed us.  People do shop local. Store owners shop at other local stores too.” 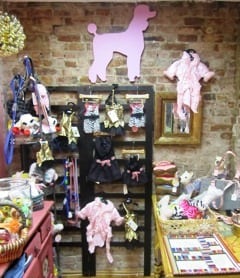 Nooks and crannies of goodies

Undaunted by the economy, Elliott has now embarked on her newest venture, Suzie Q’s Emporium, the kind of store she has always wanted to have.  Calling it “a true emporium, with something for everyone” Elliott has given the store the motto of “color outside the lines.” Within the space (which actually was one of the former homes of Back In Ireland), she has taken care to think of the whole browsing experience, setting off groups of similar goods into what she calls “vignettes,” with clear pathways for easy ambling amongst the varied merchandise, which changes weekly, and sometimes daily. Within the nooks and corners of the store you can find jewelry, scarves, children’s products, pet items, mirrors, shoes, kitchen accessories, candles, soaps and lotions, hair accessories, and more.  For men (whom Elliott advises “even though it’s pink, men shouldn’t be afraid…”) there are wallets and hats, including a stand of Irish caps brought down from Back In Ireland. Older children and teen-agers are welcome to come in and shop for the many items which might catch their eye. “From hula hoops to Marc Jacobs handbags — that’s what we’ve got here, and that’s what I wanted,” says Elliott. 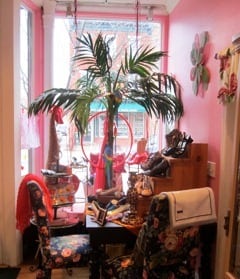 A 'vignette' area within the shop

Feedback, for the several-weeks-old business has been excellent, according to Elliott, “I’m hearing over and over how great the prices are and how shop-able it is.”  Suzie Q’s, along with Reigning Dogs & Cats Too and Back In Ireland attracts a real mix of locals and tourists, according to Elliott. All three have extensive opening hours, which contributes to their success.  The older stores are open seven days a week, and, for now, Suzie Q’s is open every day except Wednesday, and that will probably change in spring.  “If you’re not going to be in your store and be open, I don’t see how you’re going to be successful,” Elliott says.  “It may be corny, but you have to get up every morning and love what you do.  You’ll know what to have in your store and that passion comes through on a daily basis.” 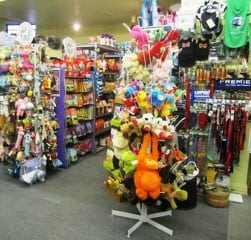 Interior of Reigning Dogs and Cats Too

Nagel’s love of animals led to the opening of Reigning Dogs and Cats Too, which she and Elliott call a “general store for pets.”  Elliott feels that people may not know that it is a full service pet supply store, stocking dog food, brushes, collars, leashes, toys, beds and things like Frontline flea and tick control. Elliott calls the prices highly competitive with the big box stores — people are often surprised. I’d like people to come by and see what we have.”  If they don’t stock a product, they may be able to bring it in if a customer requests it, if one of their distributors carries it. Back In Ireland, meanwhile, is shedding some of its stock, with many items currently 50 percent off, and some things migrating to Suzie Q’s.  The store is not closing, simply streamlining.

Elliott still stays active with the Chamber of Commerce, and other civic endeavors, “We participate with anybody who is supporting business on Main Street.  We’ve reached out to other areas.  We have participated with the Marines’ Toys for Tots program and the Humane Society — we’re a drop off for different charities, and we make sure to shop local too.” 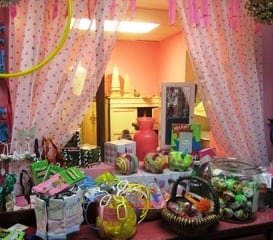 Suzie Q’s is located at 65 Main Street, and open from 12-5 p.m. daily except Wednesdays (for now); the phone is 845-265-3250. There are a lot of Valentine’s Day gift possibilities inside, and Elliott is happy to help with suggestions. And has Elliott ever been called Suzie Q herself?  Nope, only a few have ever even called her Suzie — it’s just that Susan’s Emporium didn’t have quite the right zing to it.