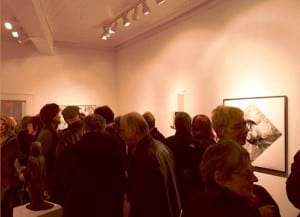 Beacon tradition draws a crowd even with the chill

Maybe it’s an idea Cold Spring should embrace on one of the other Saturdays of the month or maybe not. Either way there’s no denying that the concept of art galleries, shops and of course restaurants and taverns staying open late on a regularly scheduled Saturday can create a night of special buzz, entertainment, art appreciation and fun; not to mention good business.

Although the weather was chilly Saturday, March 10, people were out in force along both ends of Beacon’s long Main Street for that town’s now traditional Second Saturday. The monthly event is a day on which the street’s many art galleries usually schedule new show openings complete with complimentary wine and munchies. Concurrently, other establishments schedule musical entertainment, dinner specials, merchandise sales, put out trays of snacks or just plan on staying open until 9 p.m. to capture the extra flow of pedestrian traffic.

All of this happens under the auspices of the Beacon Arts Community Association (BACA) whose website will usually have a rundown of upcoming Second Saturday shows and events as the day approaches.

One opportunity missed was the always interesting wine tastings at the Artisan Wine Shop on the west end of Main at number 180.  Owners Tim Buzinski and Mei Ying So delight in sharing their expertise on wine, spirits and combinations with food. Although bars and taverns stay open to the wee hours, purveyors of off-premises bottled alcohol must shutter by 7 p.m.  No doubt Dutchess County officialdom perceives a social danger not readily apparent to wine lovers on a Saturday night.

With as many as seven openings in one night, art aficionados, people watchers and even those just in pursuit of a cheap date had much to choose from.  Herein some of the choices a reporter and his willing companion made. 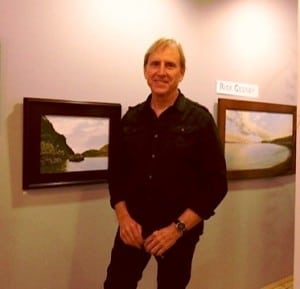 For his very first gallery show Rick Gedney drew a large and enthusiastic crowd to celebrate his landscapes of the Hudson River, which draw inspiration from the traditional 19th-century Hudson River School but nevertheless have a contemporary vibrancy and warmth.  Gedney who is also one half of the musical duo, Open Book, with partner Michele Rubin, was all smiles and nerves among the well-wishers.

His work had the premier front corner of the combination gallery/shop at 172 Main St., and by evening one painting was missing.  An eager buyer insisted on breaking the usual protocol of waiting for a show to be over before taking possession. Gedney told the story with relish, pleased to be speaking of a transaction the event intended.  His show runs through April 7.

If you follow Philipstown.info regularly you know about this show and if you missed the article explaining the exchange between the two galleries read it now.  The bau Gallery was filled with people admiring the pieces of Cold Spring artists working in a variety of mediums and materials. Many of the artists showing were supported by the presence of other artists as well.

Gallery openings are not always the best way to appreciate an artist’s work given the crowd. One of the challenges galleries have is to get their loyalists to circulate out to yield space for the newcomer who just might be in a buying mood. Still, the din, the occasionally styled clothes, not to mention the wine offered in the back room all contribute energy and excitement to work you are encountering for the first time. Lines seem more daring, color more alive, shapes have sharper edges.

One of the nicer spaces on Main Street with its brick walls and polished wood floors the Institute is usually intent, consistent with its mission, on having visitors appreciate an aspect of the Hudson’s ecosystem or in this case some of its history. Here is a link to a piece on Philipstown.info about the exhibit. Suffice to say there was a time when the river farther north frequently ran wild, especially after winter snows (remember them?). At the beginning of the 20th century a few people saw the opportunity to control the river’s outbursts, create electricity and store water. This exhibit, which was not crowded that evening, runs through to October so it will cycle through a several Second Saturdays.  Maybe by the next time they will have gotten the memo about the wine. 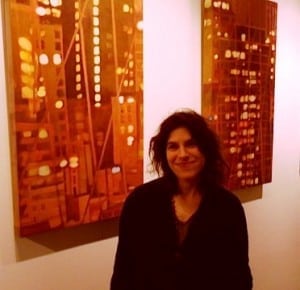 Visitors to the intimate Daniel Aubry Gallery on the eastern end, at 426 Main St., were offered champagne by the welcoming, eponymous host, a fine art and commercial photographer himself. More than one viewer waxed a little nostalgic at Beste’s evocation of New York cityscapes. One grouping was a set of muted toned renderings of different subway stations. Another group, a more colorful expressionistic take on lights amidst the giant structures that define so much of Manhattan life. They managed to capture a sense of alienation and dreamlike beauty at the same time. The show closes April 7.

Grace Knowlton is listed on the roster of the bau group but this night had her own dynamic show opening in the relatively spacious Marion Royael Gallery at 460 Main St.  Spherical shapes of many sizes dominated her presentation providing this viewer an inter-planetary scene, a sense of the universe expanding with possibility but also foreboding. She also had a number of works on display, paintings, photographs and sculptures. And the homemade sangria was delightfully sweet and pungent.

The mark of a successful event is when participants make a note to come earlier next time to take in more of the art shows, check out some of the new funky shops and make a reservation for one of the new restaurants.  The food and drink emporium, The Hop, serving craft beer and artisanal fare, had just opened and was appropriately, for a Second Saturday, too crowded to sample. A couple standing outside assured us of its worthiness. The always warm and reliable Brother’s Trattoria across the street had only a 10-minute wait.

Undeniably Beacon is undergoing yet another phase in its long road to transformation.  The effects of the national economic crisis of the last years, which shuttered galleries and restaurants, seem to be wearing off with more storefronts occupied with interesting and even daring occupants.

One thought on “Looking for the Heart of Second Saturday Night”