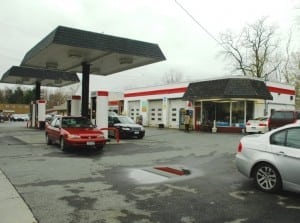 We had planned to interview Kenny Elmes, longtime owner-operator of Elmesco Citgo Inc., the gas station and auto repair shop at 33 Chestnut St. in Cold Spring, before his Dunkin’ Donuts proposal surfaced. He has been a popular figure in the community for years and many people wondered how he was doing in the wake of his serious motorcycle accident, an event that indirectly caused him to lose his left leg. This interview includes some of Elmes’ views regarding his controversial proposal. Elmes’ responses have been edited but accurately reflect his answers.

Philipstown.info: Where do you live?
Elmes: I’ve lived in East Fishkill for more than 30 years.

Philipstown.info: You’ve been in your Chestnut Street location for 25 years… how long have you been an auto mechanic?
Elmes: A total of 41 years.

Philipstown.info: Did you learn your trade as an auto mechanic through experience – or formal training?
Elmes: Both – but mainly experience. Philipstown.info: What is the biggest difference working on today’s cars compared to the 1980’s or earlier? Elmes: You need more equipment now – computers for diagnostics. Today they make cars so that they can’t be fixed by driveway mechanics. They’re harder to fix now.

Philipstown.info: What’s your favorite car of all time?
Elmes: My 1970 Dodge Challenger- and it was the only Dodge I ever liked.

Philipstown.info: Are you able to work at all now?
Elmes: No, I can’t work. I’m on disability.

Philipstown.info: Do you miss it?
Elmes: Yeah, I miss it. Not being able to be a mechanic is killing me.

Philipstown.info: Apart from the Dunkin’ Donuts question – how are you feeling these days?
Elmes: It’s hard to put into words. I never pictured myself feeling like this. I…just can’t say.

Philipstown.info: What has been the most difficult part for you – in adjusting to life with a prosthetic leg?
Elmes: I think just the difficulty in getting around. I’m a lot slower than most.

Philipstown.info: How long has it been since your accident?
Elmes: Three years in June.

Philipstown.info: How did it happen?
Elmes: I had a blow out on the front tire of my motorcycle. I was going 25 in a 45. But the tire exploded – motorcycle tires are made not to blow out. I was thrown onto the guard rail and I rolled along the top of it. If there hadn’t been a guy behind me I wouldn’t have known what happened.

Philipstown.info: What was the extent of your injuries?
Elmes: My upper body was badly beaten up. And I had a broken ankle. The motorcycle was OK.

Philipstown.info: How did you end up losing your left leg?
Elmes: I went into the hospital with a broken ankle. I developed four massive infections – including gangrene and necrotizing fasciitis – the flesh eating disease.

Philipstown.info: How long were you in hospital?
Elmes: 57 days.

Philipstown.info: People sometimes say that good often comes out of bad events…has there been a good aspect to this?
Elmes: No. Not one thing.

Philipstown.info: What do you do with your spare time – which has to be much greater now? Are you a reader, a hobby kind of guy?
Elmes: I’m not much of a reader. I used to read industry related books. I used to rebuild classic cars – I built my son’s – but I can’t do that now. I watch a lot of TV.

Philipstown.info: You’ve said that you think a Dunkin’ Donuts would be good for the community. How so?
Elmes: I’m community minded. My mom even ran a gas station. I hire kids from Haldane. Dunkin’ Donuts will hire residents and kids from Haldane too. Customers will be local moms with kids in the car – moms who don’t want to unpack the kids just to get a coffee – and seniors and older people who don’t want to walk. That and transient traffic. And – a lot of people at the local ball games and soccer games already drink Dunkin’ Donuts coffee – they just won’t have to drive all the way to Fishkill to get it.

Philipstown.info: What do you say about the anti-franchise argument? That Dunkin’ Donuts will be the thin edge of the wedge – leading to Burger King and others coming into Cold Spring?
Elmes: There is already a handful of franchises in town. The guy I’m dealing with at Dunkin’ Donuts is from Peekskill and he runs a family business – three shops. It’s not a big corporation.

Philipstown.info: The Cold Spring Comprehensive Plan may not spell out opposition to Dunkin’ Donuts specifically – but it certainly does not encourage franchises does it?
Elmes: The Comprehensive Plan is a suggestion – it’s not the law.

Philipstown.info: What about concerns over traffic?
Elmes: I’ll be reducing traffic. We have 40 cars in and out of here a day for repairs. And about half of those we test drive twice in a day. The drive-thru eliminates the parking problem – there won’t be any seating in the donut shop.

Philipstown.info: Some argue that Dunkin’ Donuts and the convenience store will have an adverse effect on other similar businesses in town. Will it?
Elmes: No one consulted me when the Appalachian Market was built. The people who will use the drive-thru are not the people who want to walk up and down Main Street. The store will be small really, basics like bread and milk, a convenience if you are getting gas.

Philipstown.info: Some people have said they would have no problem with “Kenny’s Donuts.” Have you ever made a donut?
Elmes: No, I’ve never made a donut. Certain things should be left to people who know what they’re doing.

Philipstown.info: What do you hear directly from people on the street – face to face?
Elmes: I’ve gotten incredibly strong feedback from local people – I’d say about 80-20 in favor. They say ‘Good luck.’ My main opposition is business owners on Main St. – and they serve a completely different clientele.

Philipstown.info: Last but not least – just what is your favorite pizza topping?
Elmes: Pepperoni