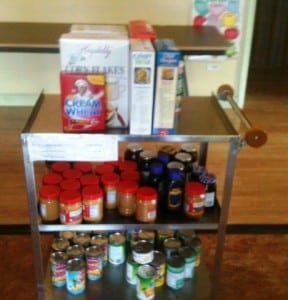 The unofficial start of summer was marked over the Memorial Day weekend by signs of gastronomic abundance. There were burgers, dogs, and salads, often in multiple helpings. There was young corn on the cob, watermelon, and, if the reports were accurate, the season’s first s’mores even made an appearance. This slice of Americana was in startling contrast to something else taking place on Saturday morning: no less than 10 people queuing up at the doors of the First Presbyterian Church for groceries offered by the Philipstown Food Bank — ten minutes before the official 9 a.m. opening.

The conversation in the line outside those doors touched on the lack of available jobs in the area. “He hired a guy from Guatemala who got a work visa, so he’s legal. But that’s where that job went.” Conversation paused briefly as someone, a friend and fellow beneficiary of the other food pantry clients, maneuvered to move up in line in order to get in and out quickly, since this client’s work shift begins at 9 a.m.

When the doors opened, food pantry clients were greeted by a volunteer standing at a church lectern who checked them in from a list of about 50 names, a number which, according to food pantry coordinator Andrea Bach, is “…way up.” She added, “When I first got involved, about 13 years ago, we had 10 to 15 families signed up, and we had maybe 10 people actually show up every week. Now we have 50 signed up and we see between 20 and 30 every week.” Bach stressed that the current client list represents not only the clients themselves but households that include multiple food pantry beneficiaries.

​The Philipstown Food Bank operation is extensive, made possible with the help of over 25 volunteers. There are food donations from ​various sources, including all of the houses of worship in Philipstown. Our Lady of Loretto, for example, collects non-perishable food at its Fair Street location and delivers the accumulated quantity on a monthly basis. “When they come, it’s not just a can or two. We get like, twenty shopping bags full of stuff,” said Bach.

Another means of acquisition is the purchase of food through the New York State Food Bank. Although not free to the Food Pantry, the Food Bank products are priced at the low end of the food pricing spectrum. “It’s comparable to Sam’s Club,” said Bach. But she’s especially eager about the food pantry’s recently filed application to qualify for a more desirable status at the New York State Food Bank, in which the food is actually free. “But there’s a handling fee of 16 cents per pound,” she said. Still, the savings will be considerable. “A can of vegetables which is usually 99 cents will now be 16. It’s incredible,” she said. The application for the new status is being processed and Bach expects approval very soon.

The trips to the food bank are done by volunteers who don’t seem to mind the wear and tear on their vehicles. “I get the heavy stuff, the canned goods,” said Charlie Merando, a longtime volunteer. “I’ve gotten up to 1,500 pounds at a time,” he added, voicing confidence in the payload capacity of his pickup truck. 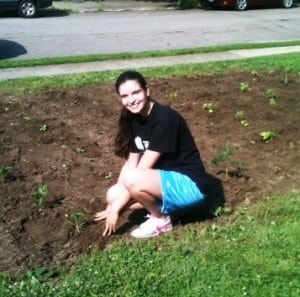 Tess Dul at work in her Philipstown Food Pantry Garden

Volunteerism is welcome regardless of what form it takes. When Tess Dul, a young First Presbyterian member, needed to develop a Gold Award Project for the Girl Scouts three years ago, she acted on the suggestion of a parish member who lives and works at Glynwood Farms and chose to create an ‘Inspiration Garden’ on the church’s front lawn. “We have zucchini, peppers, tomatoes and basil. But we’re a little late on the planting right now,” said Dul, while assessing the garden bed. All the garden yields are distributed through the food pantry. CLICK HERE TO READ: Growing Fresh Vegetables for the Food Pantry.

A complementary program to the food pantry is the daily bread run, ​carried out by volunteers, comprised of picking up day-old bread from two grocery store donors and delivering it, not just to the food ​pantry, but to the Walter Hoving Home and St. Christopher’s Inn as well, depending on the day of the week. “I find it absurd that in America, food products which are perfectly edible are hauled off to landfills and dumped when they could be shared with some organization that’s being helpful,” said Paul Lansdale, who has been a bread run volunteer for over 10 years. “When I arrive at St. Christopher’s Inn, I tell them that this is the delivery of the loaves and fishes…without the fish.”

While the need for food pantry assistance is up, the most critical form of support, monetary donations, happen to be down. “Donations are usually great over the holidays, but it slips into the back of people’s minds during the summer months,” said Bach, voicing a concern that was evident in conversations with other volunteers. Food and monetary donations can be made directly to the First Presbyterian Church at 10 Academy Street, Cold Spring. ​

There’s also an ongoing need for volunteers. Food pantry hours of operation are 9 to 10 a.m. every Saturday. To inquire about assistance for yourself, to donate, or to volunteer, contact the Presbyterian Church at 845-265-3220 or email [email protected]  Look for the food pantry table at St. Mary’s annual tag sale on June 9.
Photos by P.Smith