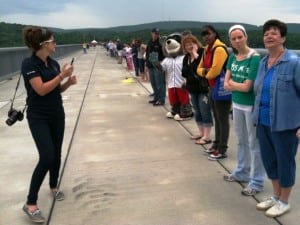 Lining up to enter the record book. Photo: M.A.Myers

An early rise to make the record book

In the larger scheme of things, setting a Guinness World Record for the longest line dance hardly ranks as very significant, but in Poughkeepsie early last Saturday morning (June 9), the event brought a light-hearted sense of accomplishment and community spirit.  The occasion brought together 2,569 people in a common goal and shared appreciation for the view of one of America’s most historic rivers from the Walkway Over the Hudson Historic State Park, which has claimed distinction as the world’s longest elevated pedestrian park since it opened in 2009.   This reporter’s enthusiastic participation undermined the usual objective perspective.

Broadcast live on WEOK (AM 1390), the event required the people lined across the mile-plus bridge to do the hokey pokey for more than five minutes if they were to break the record set in 2008 by 2,538 people performing a folk dance in Estonia.  Finding a parking space and getting in line between 7:30 and 8:30 a.m. were the biggest challenges, though the wait to be counted officially was made pleasant by free bagels and water.  Participants ranging in age from two to 102 represented more than ten states, according to Walkway over the Hudson officials.  Twenty-eight hundred registrants each paid a $15 fee, some subsidized by sponsors.  Proceeds benefit the nonprofit Walkway over the Hudson, which will put the money toward park improvements and amenities such as a waterfront elevator.

The dance itself, performed in response to the call of “Story Laurie” McIntosh blaring from boom-boxes staggered across the bridge as helicopters hovered overhead, lasted from about 9:15 to just after 9:20 a.m.  A Guinness World Record adjudicator certified the results shortly after 10 a.m.  Whereas the Wikipedia entry for “hokey pokey” suggests some controversial political roots for the familiar song that invites you to “put your right foot in,” the crowd on the Walkway displayed no hostile ideologies.  A pokier to my east noted that some might say the time would have been better spent performing some sort of charity work, but for her the morning was just pure fun.  To the west, our neighbor, Tony, announced at the end that she was going home to “eat breakfast, start laundry, and return to reality.”  For a brief half hour, the people on the Walkway were united in the feeling that they knew with certainty “what it was all about.”

The joys of Hudson Valley boosterism were lost on the Poughkeepsie parking police, however; several participants (including this reporter), returned to cars parked for about ninety minutes on Washington Street to find $20 tickets for violating a poorly communicated Saturday prohibition.