Recently, at a comedy club in lower Manhattan, the categorically unfunny topic of ethnic hatred was mentioned so often among the acts that it eventually emerged as a theme for the evening. Despite the low audience appeal for topics like ethnic divisions, intentional provocation has become a staple of “downtown comedy,” a subculture within the comedy universe that has enjoyed ever-increasing mainstream validation lately with comic alumni like Zach Galifianakis and David Cross. 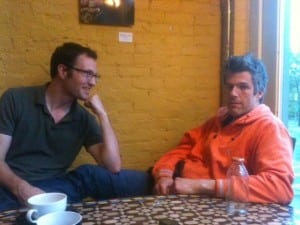 Sixty miles north of the city in Beacon, two comedians have been routinely staging shows since 2009 that are both alternative and funny. “I feel like we fit pretty comfortably in the ‘alt-comedy tradition,’” said Sam Anderson, who, along with his comedy partner David Rees, stages the productions that a recent marketing poster simply referred to as a “Comedy Show.”

For the last three years, Anderson and Rees have been putting on their genre-defying productions on a semi-regular basis, always on Saturdays and usually in eight- to 10-week intervals. For area residents unfamiliar with these shows, if it’s still possible to find someone in that diminishing population, they are held at the Beacon Auction House and casually referred to as the Auction House comedy shows.

The unique skits created to kick these shows off and the booked guests who bring a “downtown” flavor to the stage are two features setting these shows apart from comedy as normally practiced. “Wow. Okay, I’ll take that,” said Rees, admitting to being flattered at being referred to as a comic innovator. “I don’t think I agree with it, but I’ll take it.” One element underscoring Rees and Anderson’s departure from convention is the fact that they perform together onstage, furnishing the entertainment landscape with an all-but-extinct example of a modern comedy team.

Even after staging their 14th show together, they remain steadfast in their rule of never recycling material. “We don’t repeat material, because we like writing too much. Every show is an opportunity to generate new jokes,” said Rees.

A recent opening routine illustrates how comically inspired their skit writing can be. Anderson and Rees, close friends off stage, feigned a drifting apart in their friendship after both had been out of town for extended periods. As a bonding ritual they claimed necessary to deliver an entertaining show, they engaged in a supposedly regular routine called “This is the hair of my friend.” Alternately, they would place a hand on the other’s head and, in a measured cadence, recite, “This is the hair of my friend,” then spin absurd, laugh-inducing observations about the virtues of one another’s hair.

Moving southward on their anatomy, they repeated the ritual for various body parts. Even though no one was really surprised by the routine’s finale, the laughter sweeping through the hall when they got to the area just below the belt had practically reached a point of delirium.

Their meticulous approach to writing in a way that conveys an off-the-cuff feel has not been lost on their audience. “It had a very extemporaneous quality to it,” said audience member Stephanie Fogarty, after a recent show.

As the audience filed into the rustic auction house on Beacon’s Main Street for a recent  show, jostling for a seat required extra dexterity due to many chance encounters among ​friends. The ample hugs and kisses being offered created an atmosphere of a latter-day Grange Hall mixer. Anticipation grew as 8 p.m. approached and the crowd swelled to near ​capacity. The biggest audiences have been for shows featuring guests with marquee stature, such as author and Daily Show commentator John Hodgman, who drew more than 200 recently.

The team’s fondness for writing becomes logical in light of their day jobs as writers. Anderson is editor-at-large with The New York Times, a position that affords him the chance to write thoughtful essays on subjects ranging from video games to 9/11. His national profile has been enhanced by numerous citations, like a recent mention in The New York Times Book Review, suggesting he was a standard-bearer for an emerging generation of long-form journalists.

Rees gained a national following some years ago with the critically acclaimed comic strip Get Your War On, which mocked the jingoism expressed by supporters of the wars in Iraq and Afghanistan. Recently, he’s been promoting his just-published book, How to Sharpen Pencils. Though the book clearly falls within the realm of humor, it also happens to include multiple arcane facts about the history and functionality of the ubiquitous writing instrument. 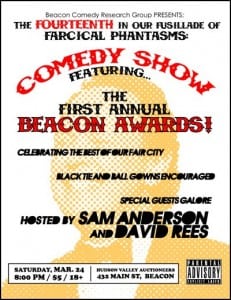 A poster from a recent show

In a lively conversation recently, these two close friends didn’t so much commit cross-talk as they did colonize each other’s comments with their own addenda. While Rees had a tendency to add snarky one-liners to Anderson’s thoughtful remarks, giving them a punchline they would’ve otherwise lacked, Anderson massaged Rees’ impromptu comments into more thoughtful reiterations. Ultimately, despite their roundabout way, they found their unified voice.

An example of this dynamic was evident when they talked about music in their shows. “I hate the intersection of music and comedy,” said Rees, in an assessment that was revised from the feelings he expressed just moments earlier.

“Well, hold on,” said Anderson, trying to reframe his partner’s comment so that it accurately reflected their earlier consensus. “We really liked the effect that (recent guest and founding member of the musical group The New Pornographers) AC Newman had on the show, because we always try to get a variety-show kind of vibe.”

Talking music led to the observation that there hadn’t been a show either could remember in which Pete Seeger wasn’t invoked, at least in passing, if not more elaborately. “He’s such an iconic figure,” said Rees, adding, “I love him. Every time I see him around town I get honestly happy.” Anderson confirmed that yes, the renowned musician and activist has such profound meaning for both of them that they’ve codified those stage references to him as “invoking the ‘Seeg.’”

Another element that screams “alternative” is the auction house itself. For the venue to host entertainment, it must comply with its use-of-space requirement and hold an actual auction at some point during each show. As conducted by Rees and Anderson, these segments give the evenings an eccentric quality that wouldn’t be possible in a traditional venue. And to the degree that these charity auctions have actually helped set market value for the items offered, the winning bidders have probably had a net-plus effect on the values of (1) having one’s dog walked and (2) having one’s dishes washed after a formal meal, to name two recent offerings. Some of the auctioned services, performed by Anderson and Rees themselves, fetched upwards of $100.

​As talk came back to their place in the spectrum of comedy and whether they are credibly “downtown,” Rees offered, “Well, I associate the downtown comedy scene with like, ​anti-comedy. And I feel like what we’re doing is really, old-school comedy. It’s two-man, character-based comedy.”

​But Anderson countered, “We’re sampling from both traditions. We have that old structure. But I think our sensibility is fairly evolved. We do a lot of dumb jokes. And the joke is that the joke is so dumb.”

​“Are you criticizing my jokes?” asked Rees, feigning umbrage.

​But in admitting to a downtown perspective, they pointed to the fact that some of their skits, and even some of the routines of their guests, fall into the category of thought pieces that require a bit more from the audience. “You want some of that uncomfortable silence,” said Anderson.

​“Well, as long as you’re a part of the show, we’ll have plenty of that,” replied Rees.

Tickets for the shows are sold at the door for the retrograde price of $5. Visit the Beacon Comedy Research Group on Facebook for show dates and guest information.