Cold Spring’s Village Board Tuesday night (Oct. 23) fine-tuned a draft rezoning law to allow the old Butterfield Hospital property to include a post office and non-village government agencies and, by special permit, retail stores, professional offices, banks, and structures with a mixture of authorized uses. After finishing the draft, the board voted 5 to 0 to send it to the Planning Board for reaction by Nov. 20 and to hold a public hearing on Nov. 27. 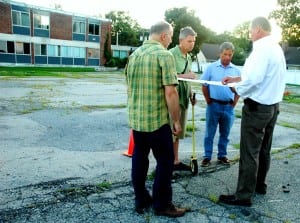 Currently, zoning for the B4 “Designated Medical and Health-Care Facility District” limits the Butterfield site to health functions, single-family residences, churches, schools, libraries, and parks, home-based occupations (such as giving music lessons), village government offices, and, by special permit, senior-citizen housing. A Town of Philipstown, Putnam County, New York state, and federal presence is banned at present, along with quasi-government agencies like the U.S. Postal Service. In addition to opening the door to such entities, the proposed law revisions would rename B4 as the “Mixed Use District.”

Plans by Paul Guillaro, of Butterfield Realty LLC, the old hospital’s owner, call for a complex with an intergovernmental municipal building-cum-community/senior center, post office, three single-family homes, 55 condominiums for retirement-age buyers, and an office-retail “square.” To proceed, along with meeting the demands of the village’s Historic District Review Board (HDRB) and Planning Board, with jurisdiction over demolition and site-plan approval, respectively, Guillaro needs the zoning-law changes.

“This is all consistent with the Comprehensive Plan,” Village Attorney Stephen Gaba told the board – four of whose members would later seriously jeopardize Gaba’s job by launching a new search for village attorney services. [See Village Loudly Lawyers Up.]

Adopted last January, the Comprehensive Plan urges the village government to strongly consider moving some village offices and activities to the Butterfield site; take advantage of “part of the Butterfield building for private offices, research, or other revenue-generating” occupants; and promote retention of the old hospital lawn as a “village green.”

Gaba told the board that a Guillaro lawyer had suggested an updated B4 zone also contain restaurants and day-care centers and allow construction of senior-citizen housing simply upon site-plan approval, without a special permit. “I think we should sort of stick to the commercial-municipal aspects” without the restaurant and day-care options, Mayor Seth Gallagher advised. He also opposed lifting the special-permit requirement for senior housing. “That was not what we were contemplating. I think it would be better for us to stick with … the current process,” he added. 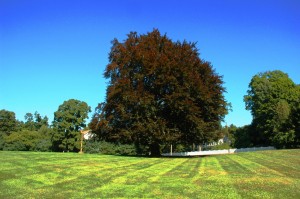 The lawn of the Butterfield Hospital property; photo by L.S. Armstrong

The board did agree, unanimously, to add banks to the list of acceptable B4 entities. However, board members indicated that they want Planning Board input before they make any final judgments. “It’s a pretty big deal,” and Planning Board views “could impact the ultimate decision,” Gallagher commented. On the Planning Board, “they’re not tied into anything.”

“We’re not tied into anything” either, Trustee Ralph Falloon put in.

Trustee Matt Francisco pointed to the potential implications for “the very residential piece of Chestnut Street” and Chestnut Ridge apartments, if the draft rezoning law gets adopted. He noted that Chestnut Ridge’s owner could use the revisions to add new structures and activities there.

Francisco likewise mentioned the post office – whose oft-extended lease at the Foodtown Plaza ends soon. “One of the most timely things, still valid, is the post office and the municipal use” of Butterfield, he said, summing up the situation: “So we have the opportunity to possibly do it,” approve the zoning revision, “if it is in our best interests, or stop if we find out” legitimate reasons, such as Planning Board objections, exist.