Preparing children for school in a social way

Up a winding driveway near the northern end of Garrison off of Route 9D lies what must look a little like a rose-colored fairytale house to children attending The Wondrous Years (TWY) center.

Director Loretto Padilla founded TWY five years ago, at around the time that Garrison’s Sandra Nice closed her home-based care center. Padilla had worked on occasion at “Mrs. Nice’s” after a 20-year career as a paralegal in law offices.

“I’d had enough paperwork,” she said, and when Nice closed up shop, some of the families migrated over to TWY, as did Nice staff member Kim Hanson, who had also worked previously at the long-closed “Miss Kathy’s” childcare center in Continental Village. Now Hanson serves as assistant director at TWY. 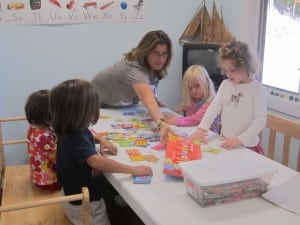 Wondrous Years’ director Loretto Padilla works on an alphabet game with the children.

Assisted by Ellie, a college student at Mount St. Mary’s, the three women, augmented by two others who also serve as substitute teachers at Garrison School, care for a total of 18 children, any 12 of whom are there every open day, which means Monday through Thursday from 9 a.m. to 3 p.m. There is generally a two-day minimum. TWY follows the Garrison School calendar, closing when they close. TWY is a New York state-licensed, home-based care center, dubbed day care by the state, but, “we do all a preschool does,” said Padilla.

Children aged 2 to 4 are welcomed into three large, connected rooms filled with bright colors and a myriad of activities. Padilla calls the essential goal of TWY “preparing the children for kindergarten in a social way. Because Garrison School and Haldane pay us visits, we know what they are looking for. Our biggest goal, though, is to be kind to each other.” Children at TWY learn everything through play. “There are no worksheets here,” said Padilla, adding “those extras can be done at home.”

The younger children are dubbed the “Pre-Workshop” group and the older ones form “The Workshop.” Some activities, largely in the morning, are shared, while others are separate, and the younger group has nap time while the older children do math games. The older children also learn to be big sisters and brothers and helpers with the younger ones. Potty-training is achieved with the youngest children, the 2-year-olds, through coordination and cooperation with parents, and Padilla said that usually by mid-year it has been accomplished.

A typical day begins with free play for an hour, generally followed by a 45-minute music class and then snacks. Snacks and lunches are provided by TWY and always include two vegetables and two fruits. After that comes a mix of outdoor time and book time, show and tell, and circle time. The children go outside, rain or shine, “taking rain walks, using the whole property,” according to Padilla.

After lunch, while the little ones nap, the older ones do letter and counting activities and frequently bake, using their weighing and measuring skills. The end of the school day sees a little winding down time for the 4-year-olds. 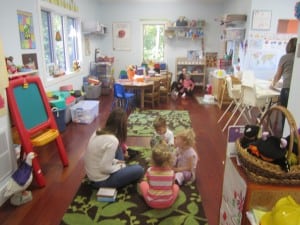 Colorful carpets serve as learning centers at The Wondrous Years.

As a state-licensed care provider, Padilla attends workshops and training sessions for a total of 30 hours every two years in addition to keeping up to speed on CPR/first aid qualifications. But she has learned a great deal herself, through her years of working in this field. “Kids love continuity and structure in a kind and gentle way, not rigid. They also love independence — getting their own gear on, putting on shoes.”

Padilla values an “open relationship with parents; we need to hear feedback — the good and the bad. There are always new things to learn. Parents have come up with some great ideas.” In summing things up, Padilla said, “There’s a lot of work behind the scenes doing this, but it’s all worth it if you love children.”

Most families find TWY through word-of-mouth. Although the facility is currently full, that can change easily and frequently, so it is a good idea for interested parents to contact them. To inquire about TWY, call Loretto Padilla at 914-438-2996.