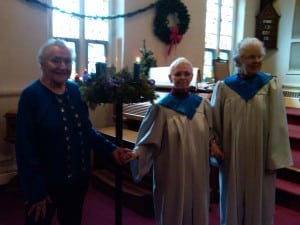 On Sunday, Dec. 9, the First Presbyterian Church of Philipstown observed the 184th year since its inception. During the morning worship service, three of the longest-term members of the congregation lit the candles on the Advent wreath for the second Sunday of Advent.

During their tenure as members, they have seen the church building change completely, adding a fellowship hall, library, office and Sunday School room. They have seen the formation of the Hudson River Presbytery and 16 Installed Pastors of the church. Together, these three women have a combined experience of 175 years of church membership. As they stated on Sunday, “That’s a lot of promises fulfilled, a lot of faith, and a lot of hope!”