The Chiara String Quartet (Rebecca Fischer and Hyeyung Julie Yoon, violins; Jonah Sirota, viola; and Gregory Beaver, cello) will perform the string quartets of French Impressionist composers Debussy and Ravel as part of the Grand Montgomery Chamber Music Series at the Montgomery Senior Center (36 Bridge St. in Montgomery) on Sunday, March 3, at 3 p.m. The concert is free and open to the public. 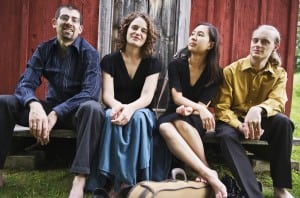 The ensemble will perform the entire concert “by heart” — from memory, without using printed sheet music. An unusual practice, it allows the group to be fully present in the moment. The Chiara recently recorded a forthcoming album of the complete string quartets of Brahms, entirely from memory, with Grammy Award-winning producer Judith Sherman.

In 2012-2013 the group celebrated 13 seasons of playing together. Recent honors include the nomination of its recording of Jefferson Friedman’s String Quartet No. 3 for a Grammy Award in 2011 and the ASCAP/Chamber Music America Award for Adventurous Programming for the 2010-2011 season.

Past awards include a top prize at the Paolo Borciani International Competition, winning the Astral Artistic Services National Audition, and winning First Prize at the Fischoff Chamber Music Competition. Awarded the Guarneri Quartet Residency Award for artistic excellence by Chamber Music America, the Chiara Quartet has also been the recipient of grants from Meet the Composer, the Aaron Copland Foundation, and the Amphion Foundation.

The Chiara Quartet is known for its innovative work in engagement with urban and rural communities of all ages throughout the United States. In 2012 the Chiara appeared with the University Musical Society in Ann Arbor, Mich., performing in unusual venues including a vacant storefront and a Toyota factory.

In 2011, the Chiara was the first judge of the online string quartet competition “The Quartet Project Challenge,” an opportunity for young quartets from around the world to post performances on YouTube of new works by composer Geoffrey Hudson and receive comments from a professional quartet. In the 2011-12 season, the Chiara presented a four-concert series at Matt Talbot Kitchen and Outreach, a unique organization serving the working poor and homeless in Lincoln, Neb.